Well, “spoilers.” If you haven’t seen it yet, that’s kind of on you.

I doubt many people who are alive have seen the original “Perils of Pauline,“ but most everyone knows the title. It’s part of the culture. It was a huge hit that propelled the career of Pearl White and made serials a staple for decades. And it introduced us to the term “cliffhanger,” even though the serial doesn’t have traditional cliffhangers. Chapters don’t end with Pauline yelling, “Help! Help help!”; they end happily for the heroine, with the villain thinking “Curses, foiled again!” But Pauline hung from a cliff in one episode, and the name stuck. 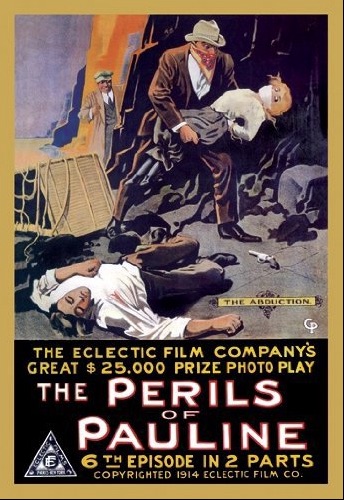 It’s been remade several times—in 1933 and 1967—but I think I was introduced to the concept via the 1969 Saturday morning cartoon show “The Perils of Penelope Pitstop,” whose plot, unbeknownst to me, was taken directly from the 1914 original: Pauline’s legal guardian keeps trying to kill her so he can get her money. You know: the usual kids fare.

Pauline also remains oblivious, not to mention incurious, as to who is trying to kill her. She’s a bit of a dim bulb. That’s one of the annoying things about Pauline.

Actually, there are many annoying things about Pauline.

Tom and Daisy
I mention “the 1914 original” but that’s not quite correct. When “Pauline” was released in the U.S., it was 20 chapters long. A shortened nine-chapter version then made its way through Europe in 1916. That’s the one I watched because it’s the only one that still exists. Imagine that. Europe suffered two world wars but managed to hold onto someone else's movie history; we, uninvaded, lets ours slip through our grasp. World wars are nothing next to a disposable culture.

The plot is simple. Harry (Crane Wilbur), the son of a rich man, wants to marry his father’s ward, Pauline (Pearl White), but she begs off, wishing first for “a life of adventure.” So the rich man, Sanford Marvin (Edward José), promises her an inheritance, then puts his secretary, Koerner (Paul Panzer, who looks a bit like Rod Blagojevich), in charge of it. When she and Harry marry, she‘ll get the dough. Or he will.

Of course, Koerner—who was originally called Raymond Owen but became Germanic in France during WWI—isn’t who he appears to be. From the title card:

“Koerner, a man with a tainted past, has wormed his way into a position of confidence as Mr. Marvin’s secretary.”

I love the insinuation: His past is tainted so he’s automatically untrustworthy in the present. And he hasn’t done a good job as secretary; he’s wormed his way in. Was he already thinking nefarious deeds? Initially, he just seems like a guy doing his job. But then an old comrade, the evil Hicks (Francis Carlyle), shows up and blackmails him. Then the old man dies, Koerner gets bupkis except trustee of Pauline’s estate, so Hicks more or less whispers in his ear: “If you can manage to dispose of her, you’ll gain control of all her property.”

Hicks sets everything in motion, but, oddly, he’s not around for long. Each chapter begins with a new plot to kill Pauline but increasingly it’s only Koerner doing the plotting. And in the end, only Koerner finds his just desserts. Hicks? I don’t recall seeing him after the third chapter.

So what exactly are the perils of Pauline? She’s...

She also enters a motor race and a steeplechase, tries to fly in an airplane, and helps rescue a submarine from foreign sabotage. 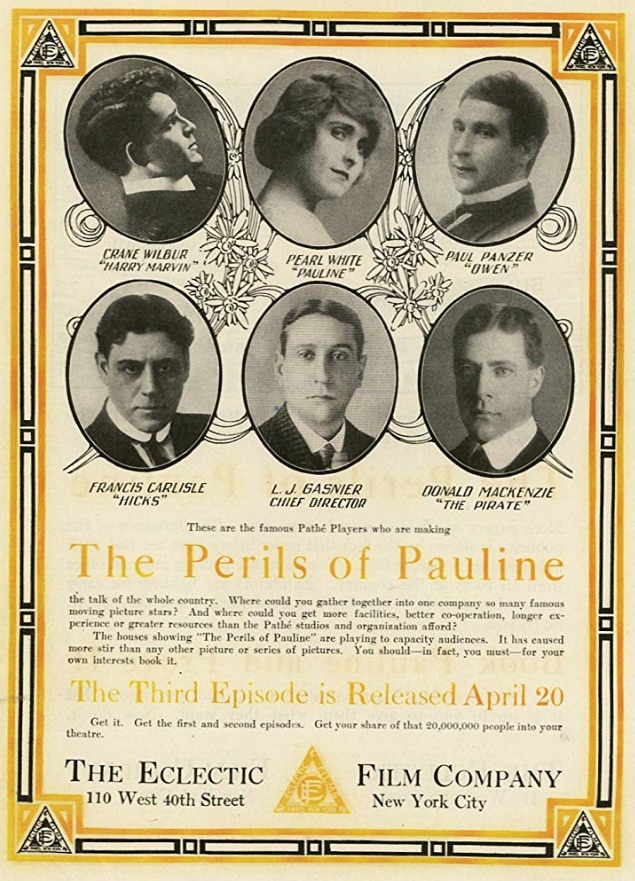 There’s great irony throughout. The “life of adventure” she wants is mostly created by Koerner in his various plots to kill her. Of the above, she only initiates the motor race, the steeplechase, and the trip out West. Otherwise, she’s just hanging around the mansion, waiting. For what? Mostly to not marry Harry. I get the feeling she doesn’t really like him.

Yet it’s mostly Harry to the rescue. He discovers the bomb on the boat and the snake in the flower basket. He rescues her from the burning house by riding up on a white horse (there’s that trope), and lassos her out of the way of a big boulder rolling downhill toward her (there’s that trope). After she manages to halt the runaway balloon by dropping anchor and then scaling down onto a rock cliff, Harry climbs up to meet her. She responds, “I’m dizzy, Harry. You’ll have to carry me down!”

Wait, I thought you wanted a life of adventure.

Both of them are kind of awful. With the plane, he delays her arrival on the airfield, which prevents her from flying with famed aviator Wilson Smith. Instead only he is killed—in a plane sabotaged by Koerner. No one blinks an eye. Neither she nor Harry wonder about all the attempts on her life. They’re like Tom and Daisy in “Gatsby”: careless people who smash up things and then retreat back into their money and vast carelessness.

It wouldn’t take Sherlock Holmes to figure it out, either: all evidence points to Koerner. He’s got motive—the money—and he’s the one forever suggesting these life-threatening escapades. In Chapter 5, “A Watery Doom,” a band of gypsies (yes) dressed as firemen (sure) tie a bound-and-gagged Pauline and Harry in a cellar, which is then flooded by a nearby river. They report back to Koerner: “All is over!” Does Koerner play it tight to the vest? Not exactly. He celebrates by arrogantly firing the butler: “I am the master here now and I no longer require your services!” So, when Harry and Pauline turn up alive, why didn’t the butler say anything? “You know Koerner fired me while you were gone. He said he was the master here. He seemed to think you were both dead.” Instead, oblivious to the end.

Make that oblivious past the end. In the final chapter, on Harry’s yacht, Pauline points to a motorboat and says, “Harry, I should like to go all alone for a short cruise.” She does but Koerner puts a hole in the boat. When she realizes she’s sinking, she bites her fist, then rows to the target practice boat. When she realizes it’s being shelled, she puts a note in the collar of her faithful dog (there’s that trope), who swims to the gunnery. Pauline is saved! Which is when Koerner finally gets his comeuppance. By Pauline? By Harry? Nope. Just some guy. He saw the sabotage, fights Koerner and tosses him in the water. We see Koerner clinging to a log; then he’s underwater and his hands are clawing the air (there’s that trope). Then the end.

That’s right; They never find out. Instead, Pauline just agrees to marry Harry, and the two live obviously ever after.

Tune in tomorrow
There’s a lot of racism, of course, Indians and gypsies and probably worse which didn’t make the French cut (see slideshow). In the Indian camp, at one point, Pauline is declared a “fair goddess,” which results in happy dancing and kowtowing. “Our deviner has predicted your coming,” a warrior tells her. “You are the white girl who was to spring forth from the ground to lead the warriors of our tribe to victory.” So there’s that trope.

I like the oddities that resulted from—I imagine—translating title cards from English to French back to English: a reference to Pauline’s “immoral” strength, for example. The balloon ride at Palisades Amusement Park is said to cost $500. That would be more than $12K today. Francs, right?

In his book, “Classics of the Silent Screen,” Joe Franklin says ”The Perils of Pauline“ is the film ”that put serials on the map.“ They‘re still on the map—just hidden. They were replaced by television in the 1950s, then rebooted as single features with A-production values by nostalgic directors like Steven Spielberg and George Lucas in the 1970s. That’s what ”Star Wars“ was, and ”Raiders of the Lost Ark.“ Our long national rollercoaster ride began here.