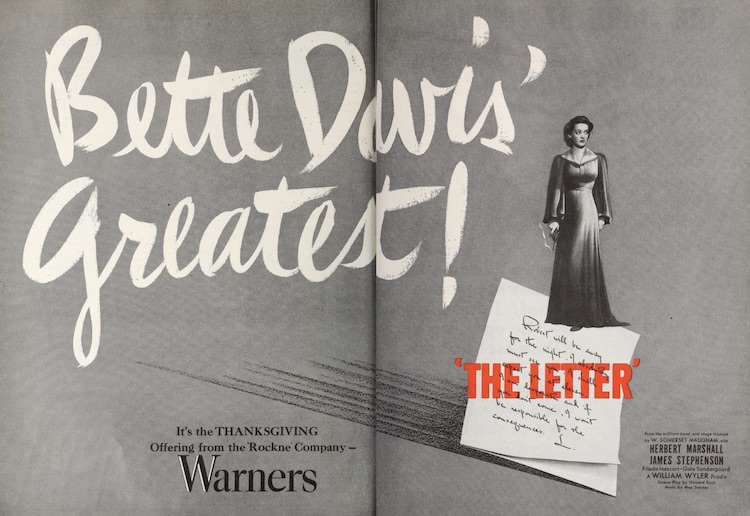 “So what do you think happens?” I asked my wife as both of us were watching “The Letter” for the first time. “Does she get away with it?” I assumed I knew the answer: 1940, Production Code, murder. Nope.

Confession: Bette Davis movies are one of the big gaps in my film studies. If she’s with Cagney or Bogart, sure, and I own “All About Eve,” but the women-centered pictures she made in the late ’30s and early ’40s, and which Carol Burnett parodied so often and seemingly so well on her variety show, I’ve never gotten around to. Trying to rectify that.

Another confession: I can’t even look at the title of this movie without think of Carol saying “Give me the lettah!” I couldn’t find that skit online but the search did make me realize the bit didn’t originate with Carol. “Petah, give me the lettah” was such a common Davis impersonation that Davis herself sent it up with Jack Paar in 1962. Like many of the classic imitations—“You dirty rat,” “Play it again, Sam,” “Judy Judy Judy”—it's a line the actor never said.

Third confession? I was a bit disappointed in “The Letter.” It’s directed by a great, William Wyler, from a play by a great, W. Somerset Maugham, and garnered seven Oscar nominations—including picture, director, actress, supporting actor, editing, cinematography. It’s got a good opening scene, too. The rest is a slog. It’s pure melodrama. Not to mention tinged with the racism of the day.

Vaguely threatening
Apparently it’s based on a true story, the 1911 Ethel Proudlock case, which caused a scandal in British-run Malaysia, and which Maugham turned into a short story and then a play in the 1920s. The highlighted portion of this Wikipedia description of the crime is almost the beginning of “The Letter” exactly:

On the evening of 23 April 1911, she was alone in the VI headmaster's bungalow while her husband dined with a fellow teacher. In the course of that evening, she shot dead William Steward, a mine manager. Steward had visited her by rickshaw and had told the rickshaw boy to wait outside. Shortly afterwards, the boy heard two shots and saw Steward stumble out of the house across the veranda followed by Proudlock carrying a revolver, who then emptied the remaining four bullets into him.

In the movie, it’s Leslie Crosbie (Davis), who empties the gun into Geoff Hammond (David Newell), in the middle of a hot, steamy night, while Chinese and Malay servants silently gather. Leslie stares with a kind of dread at the moon, and a servant stares with a kind of dread at her lacemaking; and then her husband, Robert (Herbert Marshall), a police inspector (Bruce Lester) and a lawyer, Howard Joyce (James Stephenson), all arrive to hear her story.

We know she did it so there’s no tension there. After she tells her side of it—admirably without flashbacks—we seemingly know why she did it: Hammond got drunk and tried to take advantage. Joyce, her lawyer, thinks she’ll be acquitted soon enough.

Ah, but then the lettah.

It’s brought to the attention of Joyce by his assistant, Ong (Victor Sen Yung, Hop Sing on “Bonanza”), who, throughout, is both ingratiating and vaguely threatening. The letter Joyce sees is a copy—meaning hand-copied—and it’s from Leslie to Geoff on the night of the murder asking him to come by the estate. When Joyce asks Leslie about it, she says, yes, in the horror she forgot about that, but she only wanted to ask him about birthday-present ideas for her husband. Joyce says the letter implies more. It does. It implies they were lovers. Ong tells Joyce the original is in the hands of Hammond’s Chinese widow (Gale Sondergaard, playing ethnic again), a Dragon Lady type who lives in the Chinese district, and can be had for a price: $10,000. Joyce balks. It’s unethical! It could get him disbarred! But Ong keeps insinuating himself, the letter, and the money, into the conversation.

I never really bought Joyce’s turnaround on the ethics of it all: from “No way!” to jumping through all those hoops to make it happen. Once they agree to the $10k, Mrs. Hammond makes an extra demand: Leslie has to deliver the money herself. She does, with Joyce, riding a big car through narrow Chinatown streets. The two wind up in the Opium Den of the perpetually smiling and vaguely threatening Chung Hi (Willie Fung), where Leslie examines an ornate knife before Mrs. Hammond makes her arrival through beaded curtains. I assumed Leslie would try to use the knife. Otherwise why show it? Right, because of the Chekhovian adage; it shows up in the third act.

I think I would’ve liked this face-to-face more if Warners had cast a Chinese woman in the role. Here, it’s pretty one-note: the widow stares down imperiously from a top step, bristling with anger, while Ong translates slowly and Chung Hi laughs inappropriately. The widow keeps upping her demands. Mrs. Crosbie has to remove her veil. Mrs. Crosbie has to walk over. Mrs. Crosbie has to pick up the letter off the floor when the widow drops it on the ground. It’s a long elaborate ritual that delivers not much.

The widow and the servant
So the letter is bought, the trial occurs, Joyce is conflicted but performs his duties, and the jury exonerates Leslie after less than an hour. But she can’t exonerate herself. (Plus Production Code.) On another moonlit night, she confesses to her husband that she loved Hammond and still loves him; that she killed him because he was leaving her. Afterwards, led by sounds, and by the appearance/disappearance of the ornate knife, she wanders outside the gates, where Mrs. Hammond is standing, bristling with anger. Wait, it’s not just Mrs. Hammond but Leslie’s own servant? Who muffles her screams while the widow takes the dagger and stabs her? Why did he get involved? Was it the lacemaking. Is it part of the movie’s overt/covert racism? You can’t trust any of them.

I don’t know about the play, but in the 1929 movie version, made before the Production Code had teeth, Leslie doesn't die; her husband simply keeps her on the plantation “as punishment”—I guess because he’s broke so there are no servants. By 1940 this wasn’t enough. The widow and servant can’t get away with it, either, so after they do the deed they turn and, whoops, there’s a cop. A little too neatly tied up, Warners. I like the camerawork anyway: panning from Leslie’s body outside the gate to the party still happening in the house. But then we have to have the moon again. “The Letter” is too much that: moon and melodrama.

I’m curious if Mrs. Hammond got a trial? Or if Joyce was ever disbarred? So many loose ends. I’m mostly interested in the marginal figures. Did Ong buy a bigger car? (His teeny car is a sight gag in the movie.) Did he fight the Japanese, who occupied Malaysia for three years during the war? Did he fight the British afterwards? Independence was finally declared on August 31, 1957. I know so little of it all.