Four people, all Chinese, watched a screening of “The Island” with me at the Regal Cinemas in downtown Seattle last Thursday. When it was over, I wanted to ask, “什么意思？” What does it mean? What’s that all about? 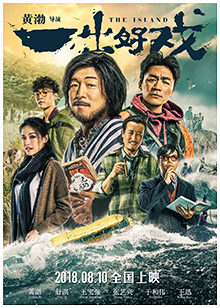 It starts simple. Ma Jin (Huang Bo, “Lost in Thailand,” directing for the first time) is a down-on-his-luck dude with big dreams and big debts. He pines for ShanShan (Shu Qi of “The Assassin”), his way-too-beautiful co-worker, but she doesn’t give him a second glance. She’s way too beautiful.

One day, during reports that a meteor might strike the earth causing giant tsunamis, his company is on a team-building morale event—one of those “Ride the Ducks” things on the ocean—when Ma learns his latest lottery ticket has come in: $60 million! He can barely contain himself. He’s celebrating, singing karaoke in front of the bus, when they suddenly encounter a giant tsunami. Amid ocean liner wreckage and a frisky giant whale, the bus/boat is tossed and tumbled and winds up broken on the rocky shore of a small, deserted island. Everyone is stunned, horrified, in tears. Particularly Ma. All that money—gone.

Right away we get a bit of “Swept Away” (or is it “Lord of the Flies”?), as the busdriver, Wang (Wang Baoqiang, Tang Ren in the “Detective Chinatown” movies), figures out how to get food, water and shelter, then begins to lord it over everyone. The old boss, Lao Zhang (Yu Hewei), is humiliated.

Ma, still holding onto his winning lottery ticket, which must be redeemed within 90 days, plots to get away. He builds a raft with his agreeable, somewhat dim cousin, Xiao Xing (Zhang Yixing, AKA Lay of the hugely popular boy band EXO), and off they go. They find nothing but a dead polar bear floating in the water. When Ma wakes again he’s back on the island, and is beaten and humiliated by Wang, who, with everyone agreeing that the world has ended, and they’re all that’s left, now considers himself their absolute ruler. That’s the first stage.

The second stage is the comeback of the old boss. Lao Zhang has found an upended cruise ship on the other side of the island, with supplies and fishing nets, and half the group follow him there. His rule is more corporate than primitive. Playing cards become a form of barter used for goods and services—and he has all the cards. Meanwhile, Ma, who has exiled himself with Xing, counts down the days until the lottery ticket is worthless. On that day, fish fall with rain from the skies. Ma considers it a gift from God, a way of making up for the lost lottery ticket. That’s when he plot his own power move—trading the fish to his hungry colleagues for seemingly worthless devices like smartphones. After Xing repairs a generator, they’re able to charge up the phones, and Ma and Xing begin to sell hope in the form of old family images. I.e., As Wang was the primitive leader and Zhang the corporate one, Ma becomes the religious leader. He is revered.

The fact that all of this is happening during the aftermath of a team-building exercise is the film's great unstated joke.

Wo bu xihuan ni
Much of the movie is extreme and over-the-top. Everyone shouts, the people are sheep, security forces come and go.

How “Swept Away” does it get? A bit. A buxom woman becomes willing concubine to Wang, while a professor creates a system to spread out the gene pool by having the few women have babies with as many men as possible. He’s shouted down. Later, the buxom woman jumps rope, or some such, while men ogle her. The Chinese today are less like Italians in the 1970s, than Brits in the ’60s: cleavage crazy.

I did laugh out loud a few times. Early on, Ma finally comes clean to ShanShan. Back in the office, he was the one who was giving her those secret gifts. “Why didn’t you tell me you liked me?” she asks. There’s a long pause, he hems and haws, and paws at the dirt. Then he finally says it: 我喜欢妳： “I like you.” As he’s barely finishing the sentence, she immediately responds with: 我不喜欢你: “I don’t like you.” It’s click-boom. The timing is as perfect as in a Jackie Chan fight.

Of course, they wind up together, and Ma is happy. So happy that when he, Xing and Wang discover a cruise ship gliding through the water on the other side of the island, lights on, fireworks sparkling—meaning the world has not ended—he conspires with Xing to keep it all quiet. They tell the others Wang went crazy, imagining a ship, and thus when he returns, superexcited about the ship, no one believes him. They chase him and give him a primitive electro-shock treatment.

But Ma’s conscience gets the better of him, particularly after ShanShan talks up how truthful they are with each other. Except by now, his dim cousin, Xing, has learned the cold-blooded lessons of achieving power, plots to talk all of Lao Zhang’s wealth and then leave everyone on the island. So Ma conspires with Wang to light their broken cruise ship on fire as a signal. There’s this great moment when Ma, pursued through the woods, falls off a cliff. And as he’s floating down, he sees their broken ship on fire, and the new cruise ship, seeing this, diverting its course to come rescue them. He smiles. I expected that would be his end. I thought he would be dashed on the rocks. The movie might have been better for it.

Instead, he plunges into deep water, wakes on the shore with ShanShan nearby. Everyone else has been rescued. She stayed behind to find him. Sweet. The camera pulls back and the credits roll.

And that’s when it gets really weird.

Breakup Buddies assemble
During the first credits sequence, we see our company members, our team builders, post-rescue. Their story is now famous, and Zhang has already monetized it by making the island a tourist destination.

Except ... Ma has won the $60 million, Xing is in an asylum, and Ma sees its inmates walking in a circle wearing the same kind of striped clothing they wore on the island. So ... was it all just a fantasy? That would explain the fish from the sky. But if so, whose mind were we stuck in? Xing’s? All of them? And if it didn’t happen, how is Zhang monetizing it?

And then we get a second credit sequence, which, I’ll assume, takes place before anything we’ve watched. It’s Ma and Xing on the metro, dreaming of riches, while a bystander, played Xu Zhenng, Huang’s “Lost in Thailand” and “Breakup Buddies” co-star, listens, rolls his eyes, then makes a disparaging comment about them on his phone. That’s it. It seems to exist for the cameo. It certainly doesn’t clear anything up.

And maybe that’s the point. The Chinese movie title is not the Chinese version of “Island.” It’s《一出好戏》, which translates roughly as “A Good Show” or “A Good Play.” That last character, xi, also means “trick,” so one assumes a pun is involved—implying something fake: jiade. The question remains: Who’s doing the tricking? And on whom?