It goes pretty fast for a three-and-a-half hour movie. Surprising since the movie itself isn’t rushing through anything. It moves leisurely. It’s got an old man’s pace—befitting its storyteller.

No, not director Martin Scorsese, who just turned 77, and who can still make movies as clipped and zippy as his own much-imitated speaking style. I’m talking the title character. The movie opens with a single-shot pan down the hallway of a nursing home, which eventually turns a corner and settles on an aged Frank Sheeran (Robert De Niro), sitting in a wheelchair in an alcove and talking about his past. To whom? One might think it’s Charles Brandt, the former Delaware attorney general who, six months after Sheeran’s death in 2003, published the book on which the movie is based. Except that book, “I Heard You Paint Houses: Frank ‘The Irishman’ Sheeran & The Inside Story of The Mafia, The Teamsters, & The Last Ride of Jimmy Hoffa,” has been pretty much debunked, and anyway we never see Brandt. We don’t see anyone. Sheeran is sitting by himself and talking to himself—or talking in his head. He’s all he’s got anymore. 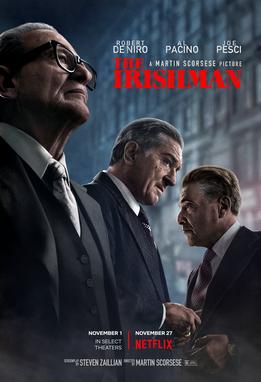 Could his story have been shorter? My friend Jim felt that. He’s from Jersey, loves Scorsese, but near the end I caught him fidgeting. As soon as the movie he was over, bye, he was outta there. An hour later he shot me this email:

Jim wanted less of the last half hour—after the death of Jimmy Hoffa (Al Pacino). Once that happened, he felt, the story was over. He’s right in a way. But Scorsese is interested in the other story, too, the effect of all this crime on the man. Plus, when introducing characters throughout the movie, Scorsese will often freeze-frame the shot and let us know when and how that character died. Usually it’s brutally. John Irving did the same thing in “The World According to Garp,” telling us the how and when each of his characters dies, leading to this last great sentence: “Her famous grandmother, Jenny Fields, once thought of us as Externals, Vital Organs, Absentees and Goners. But in the world according to Garp, we are all terminal cases.” That’s where I assumed Marty was leading us with the extended denouement: to the terminal case of Frank Sheeran.

And that’s the one he doesn’t give us. He shows Frank buying a coffin. He shows him estranged from his family—his four girls—one of whom tells him that growing up they could never come to him with a problem. If they did, he would overreact and hurt people. Scorsese shows us FBI guys visiting Frank, trying to get more details on the Hoffa case. But then this too goes away. Everything goes away. The nurse taking his blood pressure (Dascha Polanco) doesn’t know from Jimmy Hoffa. Frank is more and more irrelevant, more and more alone, until he asks the departing nurse to leave the door open to let a little light in.

And that’s where Scorsese leaves him: an old man in a wheelchair, alone, with no connection to anyone or anything. He leaves him in purgatory.

Love that. As for the movie itself?

Not Irish enough
I had trouble getting past the CGI and (believe it or not) the casting. De Niro’s the reason the movie even got made—he’s been pushing to do it, with himself in the lead, since the book was published—but he’s wrong for the role. It’s not just that Sheeran was 6’4”, 250, and De Niro isn’t, and Sheeran was Irish while De Niro, while part Irish, is the most iconic Italian-American actor of his generation. It’s that Sheeran was Irish among the Italians. He was an enforcer for the Italian mob in Philly, so you really want to feel that ethnic difference: How he is one of them and not; how he’ll never be one of them; and how maybe he has more in common with Teamsters boss Jimmy Hoffa, who was, after all, half Irish. But we don’t get this. It’s the “Raging Bull,” “Goodfellas” and “Casino” crew, but with one guy pretending—kinda—to be Irish-American.

What could someone like Liam Neeson have brought to the role? That’s what I kept wondering. Neeson is also 10 years younger than De Niro, who’s 76, so the CGI wouldn’t have had to work so hard. Here, it works way too hard. Things happen when you age that CGI can’t erase. Your lips get thinner; your mouth may curl inward; you lose any spryness in your step. We watch Frank, a 20-something WWII vet, moving like a 70-something worried about breaking a hip. It takes you out of the film. The farther back we went, the worse it got. At time, he looked like Robin Williams, other times Kevin Kline. At one point, so much of De Niro’s age and humanity had been erased that I flashed on Tom Hanks in “Polar Express.”

The production values, on the other hand, were amazing. Did our mob visit any business that’s still in existence? It was all Stuckey’s and Howard Johnson’s and Sunoco. It was famous mob-hit locations: Umberto’s Clam House in Little Italy, where Crazy Joe Gallo (standup comic Sebastian Maniscalco) bought it; the Red Fox restaurant in Bloomfield Township, Michigan, the last place Jimmy Hoffa was seen.

There’s a scene in 1975 where Frank is driving through Detroit neighborhoods to the house where Hoffa will get whacked. I came of age at that time, in Minneapolis, and goddamn if it didn’t feel like a Midwest neighborhood in 1975. But perfectly. The Coens were able to do the same with a 1960s lake in “A Serious Man.”

The early stuff—how, as a trucker, Frank met Russell Bufalino (Joe Pesci), delivered stolen, cut-rate meat to Felix DiTullio (Bobby Cannavale), and got in good with those boys—was OK, even if the CGI was distracting, and even though we’ve kind of seen it before. But I like how characters came and went. They seem central until they’re not. Like when was the last time we saw mob boss Angelo Bruno (Harvey Keitel)? At the testimonial?

It’s once we’re introduced to Hoffa, and get into national politics with the Kennedy boys, or at least Bobby (Jack Huston, sounding just like him), that I became truly interested. Has Scorsese done this before? Brought us the national and international import of the mob? In the past, he’s stayed in the neighborhood.

Pacino’s still got energy, and he’s paired against up-and-comer Anthony “Tony Pro” Provenzano (Stephen Graham, Al Capone in HBO’s “Boardwalk Empire,” and Graham goes head to head with Pacino like not many can. Their argument in prison was riveting. BTW: Is it an agreed-upon fact that Sam Giancana helped elect Kennedy in ’60 or is that still supposition? Feels like supposition, and the why of it here feels shaky. Giancana wants the mob back in Cuba, now run by Castro, so he needs the attempted coup that Kennedy launched in April 1961—the disastrous Bay of Pigs operation. Sure. Except that was planned in Ike’s term; Kennedy just came in at the tail end, then launched it without air cover. Are the theorists claiming Nixon wouldn’t have launched it against Castro? Tricky “Pink down to her underwear” Dick? President “Sure, let’s go into Cambodia” Nixon?

The movie has Frank running guns down to Florida for the operation, where he briefly meets David Ferrie (Louis Vanaria), weird eyebrows and all. First thought: Hey, Pesci’s character from “JFK”! Second thought: So is this their linkage between the mob and the assassination? When we get the assassination again, we get it the way most people got it in 1963—on television. Frank, Hoffa and others are at a diner when we hear the “flash out of Dallas” and Walter Cronkite’s heartbreakingly professional reporting. Everyone’s shocked and distraught except for Hoffa. He’s quiet. He seems to be ruminating. Did he know? Did he know who knew? Was he in the room where it happened?

Not ‘Goodfellas’ enough
I could’ve done without some of the daughter stuff. Leave in Frank busting the grocer’s hand in front of Peggy (Lucy Gallina, eventually Anna Paquin), but take out the stuff about her not liking Russell and liking Hoffa. Pesci’s cast against type here—he’s calm, wise and understanding—but his fixation on the kid is a little weird. You need to know why the Frank is estranged from his daughters and that’s it.

I also would’ve trimmed down some of Frank’s attempts to get a post-prison Hoffa to back off from trying to regain control of his union. These are interminable. Of course, since all of this is being filtered through Frank’s mind, maybe he’s constantly replaying those scenes to justify what he did—killing his friend the way he did—but it doesn’t mean they don’t get dull. And was anyone else confused by the slow-mo assassination of one of the union/mob guys by the nondescript black guy? It seems like we’re in the early-to-mid 1960s, then we get this, and everyone in the scene is dressed like early ’70s, and ... I don’t quite get what it connects to.

I’m glad I saw it. It’s not “Goodfellas” but it adds to the pantheon. Leaving the theater, I even thought what a double-bill it would make with “Goodfellas.” Same director, same stars, but an old man’s pace rather than the cocaine-fueled rush of “Goodfellas.” That said, tough to watch any three-and-a-half hour movie on a double bill. Particularly at my age.