“The Campaign” made me laugh out loud but so do cartoons.

There’s a scene where Cam Brady (Will Ferrell), the incumbent Democrat from the 14th district in North Carolina, and his Republican challenger Marty Huggins (Zach Galifianakis), having just finished a televised debate, push and pull and shove one another on the path toward, in the political tradition, a baby ripe for kissing. As they get close, Marty improbably has the upper hand, which so infuriates Cam he decides to coldcock his opponent from behind. But Marty senses this, moves at the last instant, and, in slow-motion, with the horrified faces of everyone in the room reacting, Cam decks the baby instead. In the face, as they say. 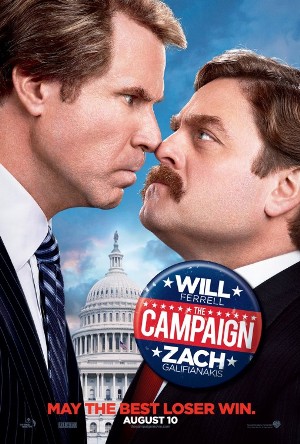 I roared when I first saw this scene on “The Daily Show”—and again during the film—but afterwards I couldn’t shake a disquieting thought. Well, that’s the movie then, isn’t it. What candidate can recover from punching a baby in the face in front of the entire press corps?

This one can. Because we’re watching a cartoon. If Jerry drops a safe on Tom’s head, Tom doesn’t die. He just gets back up for the next round. Same here.

Cam, who usually runs unopposed, first gets into trouble when he leaves a sexually explicit message on a family’s answering machine, indicating frequent infidelities, and, rather than wreck him, his numbers simply plummet from 62% to 46%. That’s how Marty, backed by the Koch-inspired Motch brothers (Dan Aykroyd and John Lithgow), joins the race. He’s tubby and fey, with a bad moustache, but he comes from a connected family (Brian Cox is his disappointed father), so he’s tapped for the campaign.

The two trade stupid insults for a few weeks (“He has Chinese dogs”/”He believes in Rainbowland”). Then the Motch brothers send a diabolical campaign manager, Tim Wattley (Dylan McDermott), to shape up the Huggins family and sharpen Marty’s claws. We get tit for tat. Cam punches the baby, then Uggie the dog from “The Artist.” Marty gets Cam’s son, who never sees his father much, to call him “Daddy” on tape. In response, Cam screws Marty’s wife and builds a campaign commercial around it. In response, on a hunting trip, Marty shoots Cam in the leg. He gets Cam drunk then calls the cops. Cam steals the police car and crashes it. Etc.

Back and forth they go, Tom and Jerry, forever dropping safes on one another and surviving. Some of it is funny, most of it is dumb, but all of it bears only the slightest resemblance to any kind of political reality. Just as Tom approximates a cat, and Jerry a mouse, so Cam and Marty approximate modern American politicians.

Ferrell is basically filtering his W. shtick through a John Edwards filter and turning it up to 11. Galifianakis is reprising his fey “Due Date” character with a touch of sweetener. The Democrat sleeps around (you know), and the Republican is backed by powerful, moneyed interests (you know), who want to make the 14th district a province of China, import cheap Chinese labor, ignore environmental regulations, and thus save on transportation costs. That’s why they’re backing Marty. Of course they don’t tell him until the 11th hour, and of course he rejects their plan. Which means they shift their money and support to Cam. Because it’s all the same. It doesn’t matter. Dem, Repub, whatev. You know. Besides, the electronic voting machines are manufactured by the Motch brothers so they can’t lose. Unless Cam and Marty somehow team up for the greater good of the 14th district...

The movie can’t even get its epigraph right:

“The Campaign,” directed by Jay Roach (“Austin Powers”; “Meet the Parents”), and written by Chris Henchy (“The Other Guys”) and Shawn Harwell (“Eastbound and Down”), is political comedy for morons. It wants to show us how dumb the political process is, but, in dumbing down everything, particularly Cam and Marty, they show us how dumb we are. We need characters this stupid in order to be able to laugh at them.