There’s a moment in “The Assistant” when I lost a little respect for our title character.

Jane (Julia Garner of “Ozark”) is a quiet, nervous assistant—one of three, and the only female—to a powerful unseen boss (voice: Jay O. Sanders) in a New York-based film production company. Halfway through the film, after a helluva day, she goes to see the head of HR, Wilcock (Matthew Macfadyen), in the gloom of his small, dim office. Most of the offices in the company are small and dim. Assuming you even have an office. Everyone there feels broken. They suck up to the people above them and bully those below, but no one seems to want to leave. They want to stay close to power even as it breaks them. It’s a company of quiet desperation.

We assume we know why Jane is at HR. Her unseen boss seems like a Harvey Weinstein type and we figure she’s going to lower the boom. The movie has been called a #MeToo movie but it’s really a #PreMe movie. It’s about everything that’s suspected but isn’t said. But we figure our girl has the goods.

She doesn’t. She blows it. 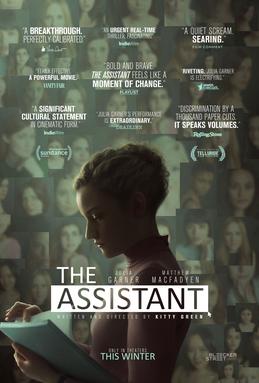 This is how she begins:

“Uh, there’s this girl who arrived here today. She’s from Boise. And she’s very pretty. And she’s young.” Wilcock, taking notes, seems confused, and Jane continues. “She was waitressing in Sun Valley when she met him. And he liked her, apparently, and just gave her an assistant job.”

What’s her second salvo? Reiteration of the first salvo. Boise girl, no experience, he flew her in and put her up in a hotel. “She’s very young,” Jane adds, as if that seals the deal.

It doesn’t. Wilcock doesn’t even know—or pretends not to know—what’s she’s implying. He asks, “Has this girl done something to harm the company?”

Some part of the movie loosened for me there. I lost interest. I was thinking maybe Jane wasn’t a character worth following around.

Couldn’t she have said something like this? “OK, this is a film production company, and so I get that there are young, good-looking girls hanging around all the time, but I keep coming across a weird vibe with it all. I have to stock the Boss’ desk with drugs and hypodermic needles? And I find used hypodermics in the carpet? I find other things in the carpet, too. A hair tie. An earring. The girl who owned the earring came by today and she seemed despondent, broken, and I don’t know why. Maybe the interview didn’t go well? Or is it worse? I don’t know. But the vibe is not good.”

Own up to the ambiguity. Again, I was hoping she would shed light. For us. Doesn’t she look at the drugs she stocks in his desk? Is he a diabetic? It’s possible. We could be condemning a man who simply has a problem with his pancreas.

Check out this dialogue from “The Assistant”:

She: What can we do?
He: Do about what?
She: About the girl.
He: OK, let’s … bear with me here. … So a new assistant arrives, from out of town, and she’s being put up at The Mark. And your boss at some point left the office.
She: To meet her at The Mark, yes.
He: Yes, according, apparently, to the jokes at the office.
She: Yeah, I guess.
He: So … that’s it? That’s why you came in?

Here’s the thing: Are we supposed to sympathize with her here? Because she annoyed me. She kept fumbling. At the same time, her most egregious error, her great missed opening, is still coming up.

L’espirit de l’escalier
By this point in the conversation, Wilcock (surely a loaded name) feels like the enemy. He turns from open and sympathetic to closed and harsh. We assume we know why. We assume he’s in on it, part of the boys club, forever talking about the New York Rangers. But we don’t really know. He could be someone who’s simply tired of vague accusations.

And he begins to ask Jane about herself. First one in in the morning, last one out at night, right? Northwestern? Smart. On the fast track. Where do you want to be in five or 10 years? Oh, a producer? He has to stifle a laugh at that. As I did. A producer is a ruthless SOB who gets things done and she’s not that. She can barely open her mouth. But he placates her. He says that we need more women producers. He tells her she’s smart. Then he begins to drop the hammer.

He: So why are you in here trying to throw it all away with this bullshit?
She: Sorry?
He: This. Whatever it is.

He makes veiled threats. He assumes (or pretends to assume?) that she was disparaging the Boise girl because she was merely a waitress. What was Jane, after all, when she first arrived five weeks ago? What was her experience? “Couple of internships, am I right? You know how many people want to work here? I’ve got 400 resumés teed up for your position alone. Ivy League grades, 4.0 GPAs. And here you are, sitting in my office, stressed out, jealous of some new assistant who’s getting more attention than you.”

Except this is the point when she nails him. “If you have 400 resumés from 4.0 Ivy League grads teed up,” she asks, calmly, but with steel suddenly showing in her eyes, “why did he hire the waitress from Boise?”

And there's silence. And … I’m kidding. She doesn’t say that. It’s what I thought she should say. Maybe it’s what she thought later in the day? Yeah, that probably would’ve been me, too. L’espirit de l’escalier, right? We think of it later, not in the moment. Even so, I wanted more from this scene. I wanted more from Jane. I wanted her to be worthy of our attention.

Instead, Wilcock of the loaded name uses the lingo of feminism to condemn Jane. Jane says she’s concerned for the girl and he snaps, “She’s a woman. She’s a grown woman. You think a grown woman can’t make her own choices? Because she’s a waitress?”

It’s not a bad scene—you could dissect it forever—but I could feel my attention wavering. I knew we would get no resolution now. “The Assistant,’ written and directed by Kitty Green, is atmospheric and ominous. A critic on IMDb says it’s like a movie about an assistant to Dracula in which we never see Dracula, just the vague evidence he leaves behind. That’s a good description. Moira Macdonald in The Seattle Times says the movie shines a light “on a malevolent shadow.” That’s a good line. Its score on IMDb, by the way, is 6.0, which is way, way low, which makes me think there's been a deliberate attack on it. It's much better than that.