And he’ll do this even if, in that first act, the mere idea of it is dismissed by a veteran cop. “You know how fast a bullet travels?” Vic Manning (Dave Bautista) asks his Uber driver, Stu (Kumail Nanjiani), who’s broached the subject out of nowhere. “I guess I didn’t really think that through,” Stu replies in that halting, “Gee, I guess I’m not that smart after all” tone Nanjiani has perfected. Great scene. I laughed.

Then they have to get all Chekhov on us. Stu jumps in front of a bullet to save Vic’s superhot daughter, Nicole (Natalie Morales), and ... we can see where this is going. You see, Stu is also coming to realize that the woman he’s had a crush on for years, Becca (Betty Gilpin of “GLOW”), isn't worth it. And a man breaking up with the wrong girl in the first act will find the right girl in the third. That's a Hollywood rather than a Chekhovian principle. 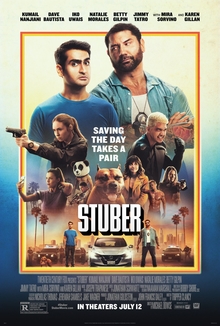 I laughed a lot during “Stuber” and don’t recommend it. The idea is fine—a cop who’d just had lasik eye surgery relying on his Uber driver to get him from place to place in LA to take down the bad guys—and the casting is fantastic. Nanjiani is my man, while Bautista, who plays Drax in the “Guardians of the Galaxy” movies, is that rare musclebound WWE guy with good comic timing.

Despite this, the movie keeps failing. And flailing. I’d watch scenes and think, “Yeesh, this is not working at all.” They’d go on too long, the timing would be off, the dialogue or language or violence would be too over-the-top. Sometimes over-the-top works, sometimes it just feels desperate. Here, it mostly felt desperate.

With a plot this contrived, you really need to make it make sense. Why does Stu stick around besides passivity and politeness? Why does Vic keep putting Stu and others in danger besides blind dedication to the job? The filmmakers make it too complicated—something we have to revisit every 10 minutes. Stu says he’s finally leaving (to go schtup the wrong girl); Vic says no, or makes a threat. Often the threat involves giving Stu a one-star rating. This works until it doesn’t. And of course, in the third act, when he’s finally allowed to go, he spots the clue that necessitates a return to save the day.

All the clichés are here:

Everyone’s a douche. Stu works days at a sporting goods store managed by the douchebag son of the owner (Jimmy Tatro), and he’s the one who gives Stu his nickname and the movie its title: Stu + Uber = Stuber. Ha ha, yeah no. He’s stupid, it’s stupid, and yet they made it the title of the movie. The movie’s a douche, too.

One star
Who do we blame for this hot mess? It was written by Tripper Clancy, whose credits are few and unreleased (“Four Against the Bank," “Hot Dog”), and it was directed by Michael Dowse, who’s mostly done Canada-related comedies: “Fubar,” “Goon,” “Fubar: Balls to the Wall.” Not a winning combo.

The editing didn’t help. Afterwards, I assumed it was two hours and told my wife, “They really should’ve edited it down to like 90 minutes.” It’s 93 minutes.