I’ve been hearing end-of-the-year buzz that “Popstar: Never Stop Never Stopping” is  a way underrated movie; that it’s actually, you know, good. Some go further: Some suggest it’s this generation’s “This Is Spinal Tap.”

If so, pity this generation.

I know it’s unfair to compare a contemporary with a classic. But since others raised the issue...

Why ‘joke’ is less funny 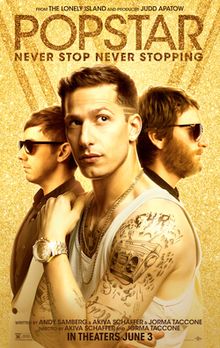 “Spinal Tap”’s humor grew out of the conventions of real music documentaries, while “Pop” feels as if it’s riffing on copies of copies of copies of copies. “Tap” is grounded. Its cities on the tour are real. Its main characters may be idiots but there’s something human about them. They’re half caricature/half character, while “Pop”’s Conner4Real (Andy Samberg) is all caricature. There’s no there there. Conner is just a joke, and the movie treats him as a joke. When you do this, ironically, you remove a lot of the funny.

There’s a trajectory to Tap’s downfall, and it follows their American concert tour—east coast to west coast. Their humiliations start small but grow: a canceled date in Boston (“I wouldn’t worry about it, though, it’s not a big college town”), a misplaced hotel reservation in Memphis, flak over the album cover. For a time, Tap seems oblivious to it all; they still think they’re on top of the world. Then the humilations deepen: second billing at a Holiday Inn, a no-show album signing, playing an Air Force Base. Their onstage humiliations are human-sized and serve to prick their pomposity: Nigel can’t stand back up again after bending back in classic rock-out pose; Derek’s “pod” doesn’t open; they get lost beneath the arena in Cleveland and the Stonehenge props are tiny rather than towering.

Conner’s humiliations are outsized and less funny. To jazz up his act, he goes for a quick-change bit, but has to hide his junk to make it work, and a wardrobe malfunction reveals him to be seemingly dickless. (I like that, backstage, his handlers try to assure him that no one noticed.) To bury that story—as if it wouldn’t be a meme forever—his publicist (Sarah Silverman) suggests he propose to his girlfriend (Imogen Poots), which he does, with Seal singing her favorite song and her favorite animals (wolves) nearby. But the singing upsets the wolves, who attack the guests and turn the garden party into bloody chaos.

Meanwhile, his opening act, Hunter (Chris Redd), eclipses him in popularity, not to mention vindictiveness. But when Conner asks his manager, Harry (Tim Meadows), to kick him off the tour, he discovers Hunter is Harry’s client, too. It’s Conner who goes back home, the tour a failure, his career seemingly over.

So what happens? He becomes a better person, of course. He once fronted a boy band, The Style Boyz, and he reconciles with the estranged members he screwed over: DJ Owen (Jorma Taccone), and lyricist Lawrence (Akiva Schaffer). All along, we’ve been following the latter, who, after a stab at a solo career, has been farming and woodcarving in Colorado. Both are treated as jokes—as if anyone could enjoy such things, so far away from the limelight—with the former having a typical comedy punchline: he’s been farming weed, yo. All three reunite on the “Poppy” awards, and are back on top. Added bonus: Hunter is a dick to Mariah Carey onstage, so no one likes him anymore. Because it’s never enough for you to succeed; your enemies have to fail.

‘I feel young again! I feel ... 38!’
It’s interesting to note the need for a villain. Does “Tap” have a villain? You could argue the Yoko-Ono-ish Jeanine Pettibone (June Chadwick), who controls David, and causes the riff with Nigel, and who takes over from their seemingly incompetent manager, Ian Faith. She has a bit of a comeuppance as well: Ian returns, and in Japan, where Spinal Tap is resurrected, the two eye each other warily. But all of it is much subtler than “Popstar”'s disimissal of Hunter.

You know what’s amazing to me? Andy Samberg is actually older in “Popstar” than Michael McKean and Christopher Guest were in “Spinal Tap”: 38 years vs. 37 and 36. I still think of Samberg as the next generation but “Lazy Sunday” was more than 10 years ago.

The Lonely Island guys give us a few good parody songs: “Finest Girl (Bin Laden Song),” along with Conner’s would-be testimonial to gay marriage, “Equal Rights,” in which he continually insists, “I’m not gay.” But there’s nothing as clever as marrying the bombast of gangster rap with a very ordinary, very white Sunday afternoon.

One of the biggest problems for me is that “Popstar” doubles down on the very thing it should be satirizing: celebrity culture. 50 Cent, Carrie Underwood and Simon Cowell, as the mockumentary’s talking heads, act like they’re in the on the joke, when, to me, they’re part of the problem. But the movie sees them as part of the solution.

A few years ago, Samberg co-starred as the son of Adam Sandler in the dreary comedy, “That’s My Boy.” Not yet, but he’s becoming dangerously close.

Tags: Movie Reviews, Documentaries, Mockumentaries, Movies About Music, Andy Samberg, Spinal Tap, Adam Sandler
Posted at 07:18 AM on Monday January 09, 2017 in category Movie Reviews - 2016
« What Liberal Hollywood? Part 94   |   Home   |   What I wouldn't give for a large sock with horse manure in it »