This may be my favorite Almodóvar. He’s usually too quirky or pungently sexual or something for me, but this one hits home. Because it’s a portrait of the artist in winter and I’m a writer in autumn? Because the artist, director Salvador Mallo (Antonio Banderas), has a sense of failing his dying mother, and I’ve been probing that wound since my own mother died last August? The movie is Almodóvar’s, specifically his, but it doesn’t feel narrow. It’s as wide as life. It forgives everything but bad art.

It’s Almodóvar’s “8 ˝”—and not. Early on, Salvador talks about how his film career made up for what he missed in his secondary education. That bit is actually worth a sidebar in itself. His mother, Jacinta (Penelope Cruz), wants her son to be educated—to have the opportunities she and her husband (a mostly absent, near-Joseph figure) never had—so she works hard and admonishes young Salvador (Asier Flores) and sucks up to the local Catholic hierarchy to get him into seminary. There, they discover he’s got a beautiful voice, make him choir soloist, and totally neglect his other studies. He never gets the superior learning his mother desired. Almodóvar doesn’t underline this irony, he leaves it for us to connect the dots. 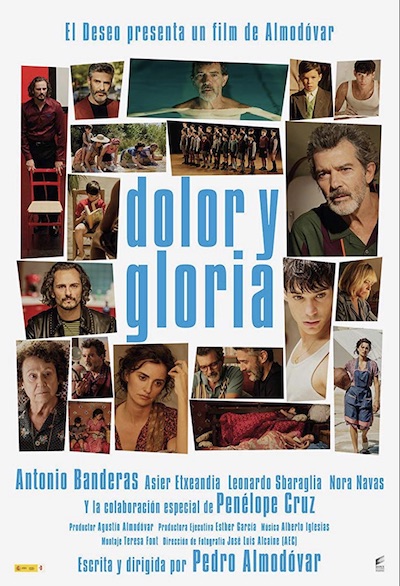 The point is there’s a lot he doesn’t know. Early on, Geographia is splashed across the screen and in voiceover he tells us his knowledge of that subject is limited to where he wound up in the world while promoting his movies. Cue cartoon airplane landing on a cartoon map of the world. Then we got the title card Anatomia, and I smiled, thinking of the obvious Felliniesque pleasures there. But this is how the movie is not “8 ˝.” Since he was 30, Salvador has suffered chronic pain. We get a list of his ailments, some of which are also mine: acid reflux, asthma, tinnitus, headaches. His back pain has gotten so bad he’s actually stopped working—to the surprise of everyone. An actress-friend tells him she thought he’d be the last of them to quit work; he nods. A doctor asks him if he misses the work and his eyes turn hard. “Not a day goes by that I don’t think of it.”

Has Almodóvar read Philip Roth’s “The Anatomy Lesson”? Or is it common for artists to give their alter egos chronic pain? Maybe it’s partly wish fulfillment. “If only there was something that could stop me from doing this every fucking day.”

In Antonio’s eyes
I assumed, early on, we were watching a long, slow suicide, but it’s the opposite. It’s about forgiveness and redemption and the long way back.

The movie opens with Salvador in a pool, doing underwater therapy, and flashing back to his mother and three other women talking men and singing while washing clothes in the river. The song ends “That’s how my blindness started,” and we cut back to Salvador and wonder if we’re going to find out how his blindness started.

Kind of. Did he seek out Alberto (Asier Etxendia) to clear away the clutter in his life—their 30-year feud—or was heroin the true motivation? I lean to the latter. On the set of an early film, “Sabor” (“Flavor”), Salvador, on coke, hated the way Alberto, on heroin, interpreted his character. They fought over it, and Salvador dismissed him in the press and maybe truncated his career, and you can see the pain and anger in his eyes when Salvador has the audacity to show up, unannounced, at Alberto’s home after all these years. But their interaction is glorious. Salvador is apologetic (sorta), his eyes holding a playful “I’ve been bad” look, and Alberto softens when he sees how frail he is and after Salvador smokes heroin with him. Seemingly hours later, but maybe days, he shows up at Salvador’s door, enthusiastic. He thinks they’re best friends now. He’s a sweetheart with bad taste—his clothes are a horror show—but he knows art. While Salvador sleeps, Alberto snoops, and finds and reads a Word doc, addicion, which begins in lovely fashion:

“My idea of the movie theater was always linked to the breeze of summer nights. We only watched movies in the summer.”

It’s a story about Salvador’s first love, Federico (Leonardo Sbaraglia), and Alberto wants to turn it into a one-man theater piece, but Salvador says no. Does he not trust him? Probably. Does he not want to accede control over his own story? Definitely. But eventually he acquiesces. Why? It’s another peace offering. The two are supposed to be publicly reunited at Cinematheque for a showing of a new print of “Sabor,” but they never make it. They do heroin instead, and Salvador feels he’s too stoned to be articulate and artistic before a crowd. The desperate event planner, however, phones him, and holds up the phone to the audience, and now he has to be on. In order to clear his mind, Salvador does coke again. Which is when the old Salvador emerges.

He’s trying to explain the feud from from his older, wiser perspective, but the more he talks about it, and the more coke kicks in, the less forgiving he becomes. With Alberto standing off to the side, mouth agape, completely betrayed, Salvador talks about Alberto’s “tediousness” and “lethal rhythm” for the character. Finally Alberto slaps the phone away and yells at him. Up to this point, the scene is hilarious, but now we fear a bit for Salvador. He’s slighter and frailer, after all, and Alberto is enraged. Then, in a flash, there’s a look of hard anger in Salvador’s eyes, and you see the director there. You see the imperiousness. Alberto backs off. So  much of the movie, truly, is in Banderas’ eyes.

Of course, Salvador still needs heroin; thus Addicion as peace offering. And it leads to Salvador’s second reunion—one that, admittedly, requires some suspension of disbelief. We have to believe that the real Federico was finally back in Madrid, and in that neighborhood, and just happened to see the sign advertising Alberto’s one-man play and checked it out on a whim. And there, tears in his eyes, he sees his own story unfold before him.

The addicion of the title is two-fold—love and drugs—and Federico and Salvador ended badly:

“I believed the strength of my love would defeat his addiction. But that didn’t happen. Love is not enough. Love may move mountains, but it is not enough to save the person you love.”

So we get our second reunion, late at night, at Salvador’s place. It’s a charming scene. As the two talk, Salvador seems smitten again, and steals glances over at Federico. Federico wants to stay the night (you can tell), and Salvador wants him to (you can tell), but also doesn’t want him to, and in the end doesn’t wins out. But it rekindles something in him. The flame of love? Not giving into it but holding onto it? Afterwards he doesn’t return to heroin. He picks it up and puts it down. He begins to try to get it together again.

From Paterna, with love
I think I was right about the suicide, by the way. At one point, we see Salvador reading in bed:

“Life disgusts me as a useless medicine. It is then when I clearly feel how easy it would be to get away from this tediousness if I had the simple strength to want to really push it away.”

He highlights this part. I love the highlighting. Me again.

Throughout the movie, we get flashbacks to Salvador’s childhood in Paterna, and the beautiful cave-like apartment by the sea. There, a young Salvador teaches an illiterate laborer, Eduardo (Cesar Vicente), his ABCs, while Eduardo, probably without knowing, teaches Salvador who he is. At one point, Eduardo showers naked, beautifully naked, in a bucket in the kitchen, while Salvador throws himself onto his bed, hot and flushed. During Addicion, we saw flashes of classic Hollywood movies from the period—Marilyn, Liz Taylor, “Splendor in the Grass”—and that’s what this reminded me of: Natalie Wood trying to satisfy her desire for Warren Beatty by tossing herself onto the bed.

The movie’s third reunion is more tangential than the others and requires another grand coincidence. A flyer the adult Salvador receives for an art gallery includes a painting/sketch of a small boy—him—and he visits and inquires about its author. It came from a Barcelona flea market but it’s anonymous, though there is a message on the back. He buys it and reads it. The message is from Eduardo, to him, thanking him for teaching him to read and write. He sent the sketch when Salvador was in seminary but his mother never passed it along. Because she was busy? Because she feared what it meant? “Every time I write,” Eduardo wrote, “I think about your hand guiding mine.” The adult Salvador reads this and his eyes fill. Then we see him at his computer, writing “El Primer Deseo.” He’s working again.

“Dolor y Gloria” swept the recent Goya Awards. It was nominated for 16 and won seven, including film, director, screenplay, actor, and supporting actress, Julieta Serrano, who plays Salvador’s mother late in life. She tells him how she wants to be buried, admonishes him, hands him the egg with which she uses to darn socks. Their conversations are serious, and humorous, and heartwarming. “Have I failed you just being the way I am?” he asks.

Serrano is apparently a legend in Spain but my immediate thought was dismissive. “That’s supposed to be what Penelope Cruz ages into? I don’t think so.” But it all fits. All those flashbacks to Paterna? They’re not flashbacks. At the very end, after the adult Salvador undergoes surgery, we see, for a second time, young Salvador and his mother forced to sleep in the train station to Paterna. But this time the shot widens, and we see the boom mike operator, and the clapperboard holder, and finally Salvador, still alive and directing “El Primer Deseo.” At first I thought he was finally filming what he’d been remembering. But then I realized, no, he hadn’t been remembering it. All that time, during his inactivity and time of dolor, he’d been filming the movie in his head. “Not a day goes by that I don’t think of it,” he’d told the doctor. Exactly.

I’ve seen this movie twice now and could watch it again. Each time, I leave it with my heart less empty. 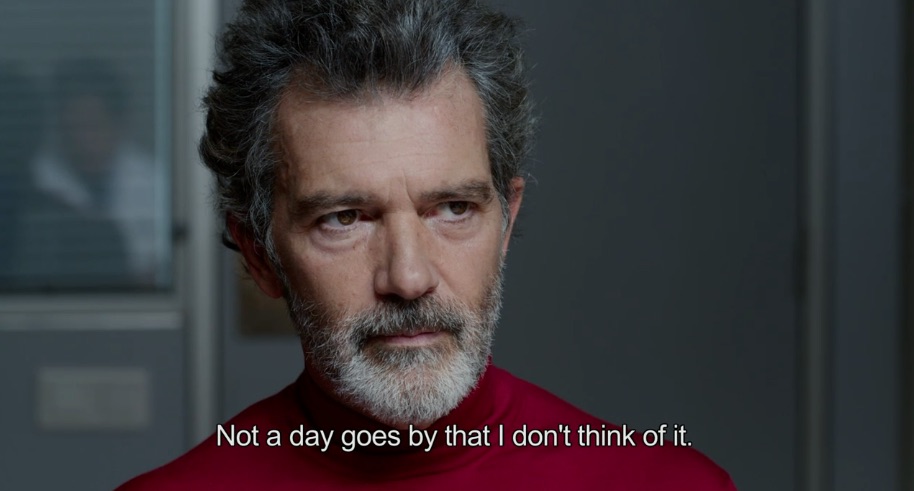