“No Time to Die,” the 25th James Bond movie, and the fifth and last to star Daniel Craig, has a lot of problems, but at least it's unintentionally ironic. It was scheduled to open in April 2020 but was delayed by … what was it again? … oh right, a global pandemic that shuttered theaters, restaurants, everything, and, as of this writing, per Johns Hopkins, has killed 5.4 million people worldwide. As a result, distributors decided to delay release by a year and a half. They figured April 2020 was no time to die. Or at least no time to gross a billion dollars.

More, the movie’s maguffin, the thing that causes Bond to travel around the world and battle the bad guys, is in fact a virus—the manufactured, nanobot kind—which can be programmed to kill a person or family, or entire races, and once it’s in your system you can never get rid of it. The filmmakers seem to go out of their way to explain what this means. “You infect enough people…” Q (Ben Whishaw) begins, “… and people become the weapon!” Bond finishes. Yeah, don’t need to underline that one anymore, guys. It’s 2021. We get it. 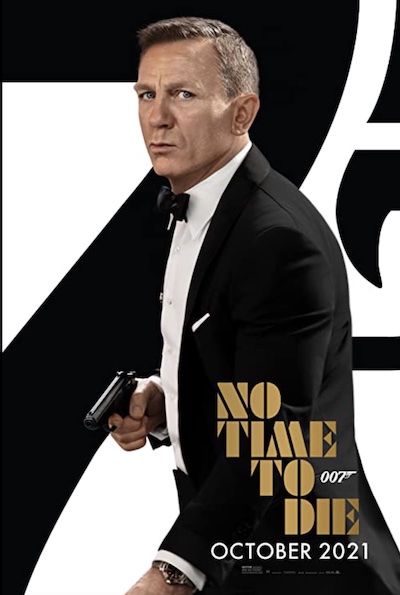 But to me the movie’s greatest irony is this. For decades, James Bond has been one of the ultimate male wish-fulfillment fantasies—a superspy with supersexy women literally at his feet, but you always had the sense it was kind of necessary for the job. He had to be coldhearted to be clear-eyed to win the day. But increasingly Bond was seen as clashing with his times. His own boss, played by Judi Dench, called him a “misogynistic dinosaur,” and that was a quarter century ago. So with the Daniel Craig iteration, which began in 2006, they’ve made him less of a lothario. The three Bond girls per flick? Gone. This Bond actually falls in love: with Vesper (Eva Green) in the first film, and now with the Proustian-themed Madeleine Swann (Lea Seydoux), the first official Bond girl to appear in more than one film. Bond loses her in the beginning, gets her back in the middle, and near the end discovers they have a kid together—a 5-year-old girl named Mathilde (Lisa-Dorah Sonnet). That’s right, James Bond is a dad. He’s a caring family man, an upstanding, sensitive role model for the 21st century.

And it kills him.

007s
I guess that’s the big reveal: James Bond dies in this one. We get a lot of deaths: Bond, Felix Leiter (Jeffrey Wright), Blofeld (Christoph Waltz), most of SPECTRE. They’re cleaning house before the reboot.

The movie also introduces a new 007 and this time she’s Black. At one point, M (Ralph Fiennes) says “Where’s 007?” and we cut to Bond on a sailboat off Jamaica. But that’s misdirection. M is really talking about Nomi (Lashana Lynch, Maria Rambeau in the Marvel Universe).

Question: Why did they make her so obsessed with the number? She’s constantly throwing it in Bond’s face:

I assume they did this to piss off the racist, sexist trollers of the world who can’t imagine a Black, female 007, but it doesn’t make much sense in their reality. Does Bond really care about his employee ID? Plus it makes her annoying as fuck. And of course, at the 11th hour, she gives it back anyway.

Three male writers worked on this—Neal Purvis, Robert Wade and director Cary Joji Fukunaga— and though they added Phoebe Waller-Bridge of “Fleabag” fame, they’re not great with the female characters. OK, I liked wide-eyed newbie agent Paloma (de Armas), wearing a dress to knock your socks off, and Naomie Harris’ return as Moneypenny, flirtatiously flipping Bond’s visitor ID badge at MI-6. Both were fun. But they’re minor characters. The movie’s biggest problem is its biggest female character. Madeleine Swann is weak. As in weak-willed. She’s just a weepy, uninteresting thing.

As a child, she witnesses the murder of her mother at the hands of the Noh-masked and ridiculously named Lyutsifer Safin (Rami Malek), this movie’s baddie, who then saves her life when she falls through the ice. So is she SPECTRE? That’s what we think, and that’s what Bond thinks when he’s attacked while vacationing with Madeleine on the coast of Italy. Cyclops (Dali Bennalah), the movie’s henchman, is in the midst of being strangled by Bond when he manages to gasp out “Madeleine is a daughter of SPECTRE”; then Blofeld phones her to thank her for helping them. Bond overhears and glares. Does she protest her innocence? Kinda. Weepily. Guiltily. So Bond puts her on a train and out of his life.

Later, the incarcerated Blofeld tells Bond that she was innocent all along—that he did it to break Bond’s heart. “My poor little cuckoo,” he says. “You were always so very, very sensitive.” That’s a good bit, and too true in this iteration, but when does he say it? Right before Bond kills him. And how does Bond kill him? Unknowingly, via Madeleine. It’s so stupid. She’s Blofeld’s shrink, his only contact, so Safin re-enters her life to give her a perfume laden with the nanobot virus targeting Blofeld, and threatens her child unless she uses it. So she does. But then she can’t go through with it. And Bond grabs her wrist and gets the virus on him.

I don’t get her relationship with Safin at all. He saves her life … and then disappears for 25 years? And then shows up and demands the Blofeld thing? And then he sends his team to Sweden or wherever to bring her and her child to his private island? And in one of those dull “We’re not so different, you and I” moments with Bond, Safin says he loves her, too?

Check out this exchange between Madeleine and Bond. We’re an hour and forty minutes into the thing and our hero finally hears about the villain.

What does the guy want? That’s the fundamental question of drama, but after Safin kills most of SPECTRE—to avenge his family’s death at their hands—we have no fucking idea what he wants. So the filmmakers make it all about a vague revenge. And [shrug] her.

I don’t get Madeleine’s relationship with Bond, either. It’s not just that Craig and Seydoux have zero chemistry, she’s given nothing to do. She succumbs to the subterfuge that she betrayed Bond in Italy, she succumbs to Safin’s demand that she kill Blofeld; and when Bond shows up in Sweden or wherever, and sees the quiet, despressive child with the startlingly blue eyes, she lies to him. She tells him it’s not his. Twice. This is the love of James Bond’s life? The woman he’s willing to kill himself over?

Remember how cold-hearted and clear-eyed Bond used to be? This is what he tells Madeleine in Sweden:

I don’t know if you wanted me to come here, or why you tried to kill Blofeld, or who gave you the poison to do it, or how long you’ve been working for them…

Our action hero, ladies and gentleman.

Poor little cuckoo
At least we get some nice homages. The hall of Ms, for example, with its paintings of Judi Dench and Bernard Lee. Bond tossing his ID badge into Moneypenny’s wastebasket the way Connery used to toss his fedora onto Moneypenny’s hat rack. Winding up alone in the life raft after Felix’s death, the way the early Bonds wound up with the Bond girl. Shooting the unseen baddie in the tunnel and making it look like the gun barrel sequence. “James Bond will return” after the end credits.

I liked seeing a bit of Q’s life. I liked when Bond tries to reenter MI-6 for the first time since retirement, and we get a different kind of “Bond, James Bond” line. The security guard asks his name, he says “Bond,” the security guard looks blank, so he adds, annoyed, “James Bond?” Fun. Smart.

But why give up the sexcapades and keep the bad puns? “It was an eye-opening experience.” Oof. Stop it already. Why keep the idiocy of the villain’s island hideout, with its industrial lair, security guards, and bowing serfs? Didn’t the “Austin Powers” movies kill off those conceits? Why go Jack London for the post-mortem toast? What, no good British writers to choose from? And why not end it there—with M saying “Back to work”? That’s a good end. Why cut to Madeleine and Mathilde driving along some seaside road, and Madeleine saying she’ll tell her a story about a man, James Bond, and Mathilde smiling her sickly smile? Why hire that girl to play Mathilde in the first place? She brings nothing. Why end with a Louis Armstrong song like it’s a Nora Fucking Ephron movie?

Above all, why did you ruin James Bond?

This is how they kill off the world’s greatest secret agent. After putting the women, including Nomi(?), into a boat to safety, he stays behind on the island. “I have to finish this,” he tells Madeleine. “For us.” For us? No longer for England and freedom and all that? Since the island is a nanobot virus farm, the Brits are going to blow it up, and Bond has to make sure the bloody blast doors are open. And he does. But then Safin shows up, blah blah, and speechifies before Bond tackles him into a fountain and brutally breaks his arm. Ah, but Safin has been carrying a vial with the nanobot virus targeting Madeleine’s and Mathilda’s DNA, and it gets in the water and on Bond. Now, if he ever sees them again, he will kill them. Ha ha ha ha.

(Aside: Why did Safin tell Bond all this? If he’d said nothing, Bond would’ve killed the woman and daughter he loved. Surely that would’ve been more painful. For that matter, why is MI-6 so sure blowing up the island will destroy the nanobot virus? I thought it lived forever?)

Anyway, after Bond realizes he can never see his woman and child ever again, he basically gives up. He just kills Safin and hauls his sorry ass to the rooftop. He doesn’t try to get away. They might as well be playing Harry Nilsson’s “Can’t live/Living is without you” on the soundtrack. It would’ve been better than the dialogue we got:

Bond: You have made the most beautiful thing I have ever seen. She’s perfect. Because she came from you.
Madeleine: Oh my god, the vial! You have been poisoned. There has to be a way.

There isn’t. They say their I love yous and Madeleine finally admits the child is his.

Madeleine: She does have your eyes.
Bond: I know.

He watches the rockets coming toward him.

When they reboot this thing, I beg them to bring back the frivolous sex and the cold heart. James Bond can’t be us. They turn him into us and he dies. But first they make him dull.