OK, if you’re going to do a male-female body-switch comedy, wouldn’t it be funnier if each gender started as, you know, a typical or extreme version of itself? Like Sofia Vergara and the Rock? So you can play off that once the switch is made?

In “Never Say Die,” the male lead, Ai Disheng (pronounced “Edison,” and played by Allen Ai), supposedly an ultimate fighter with the UFK, is thin, untoned and not particularly macho, while the female lead, Ma Xiao (Ma Li, so outstanding in the 2015 sleeper hit “Goodbye, Mr. Loser”), an award-winning TV reporter, is short, squat, and looks like someone who can throw a punch. She looks like she could take him from the start. 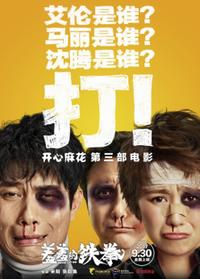 Thus when the switch is made, and he suddenly starts acting feminized, and she’s all tough guy, it’s not ... particularly different. Or logical. Or funny. Although I did laugh when, trying to get something from her boyfriend, he (inner she) resorts to a little sa jiao, freaking the dude out.

And if you’re doing the gender switch then get into it. I.e., What would you want to explore if suddenly you became the other gender? She (inner he) visits the women’s locker room, and of course it’s as sexy as in any teenage boy’s imagination. But what if it weren’t? What if it were boring? I like that they start out enemies—she’s the award-winning reporter that ruined his career three years earlier, while he’s managed by the father she hates—so they each do things to try to ruin the other. He (inner she) runs around the fight ring like a coward; she (inner he) files idiot reports and gets suspended. The former isn’t a bad bit but the latter is either unfunny or doesn’t translate well.

Sadly, per the rom-com rules, they have to fall in love with each other, but how weird is that? You’re falling in love with you. That’s way creepier than the movie lets on.

It all leads to a championship fight. And man does it miss an opportunity there.

Yo, Adrian
The UFK champ is Wu Liang (Xue Haowen), to whom Edison lost the big match three years ago, after which it was revealed—via Ma’s intrepid reporting—that he took money to throw the fight. It ruins Edison’s reputation and his career. Kinda sorta.

There's immediate problems with all that. First, Wu looks like he could take Edison with one punch. In other words, what odds are you getting on Wu to win? Also, Wu turns out to be Ma’s boyfriend. She's exposing the corruption of ... her boyfriend’s opponent? And no one thinks this odd? Does she at least give full disclosure?

It's no surprise that Wu turns out to be our villain: corrupt, manipulative, and cheating on Ma. She finds this out when he brags about it all to Edison, but with her mind/soul inside. More, Edison never threw that fight. He actually won that fight (on points), but the results were skewed by the UFK commission, which is run by Wu’s father. It's a crooked family affair.

All of this leads to a big rematch. But since Edison’s body now houses Ma’s untrained instincts, they have to go to the Buddhist mountains to train. Some of this isn’t bad—particularly when a Buddhist master flies off a balcony, robes fluttering in the Hong Kong movie manner, and stumbles on landing. I also liked the two of them being trained in dexterity by shooting Buddhist fliers into passing cars. But the whole thing isn't far removed from “Rocky IV“ and all the rest. It's ”We‘re gonna need a montage."

As for the missed opportunity? Ma is now in Edison’s body about to fight the ex-boyfriend who cheated on her. She’s got her inner toughness and his muscles—such as they are. She’s the woman scorned with the power to throw a punch. She should be a rage machine. She should slaughter him. But we don’t get a glimmer of that. Instead, in the second round, they switch bodies back again so Edison can be the hero who never says die and wins the championship and gets the girl.

That's what never dies. That storyline.

What Never Dies II
“Never Say Die” was created by the same production company, Happy Mahua Pictures, that made “Goodbye Mr. Loser” two years ago, and the two films share characteristics: low budgets, no stars, an easy route to magic realism. There, he time-traveled by getting drunk; here, they switch bodies when they’re hit by lightning.

Both are also box-office smashes. “Loser” was anything but, becoming the highest-grossing comedy in Chinese history: $226 million. “Die” swamped it: $320 million and counting. So expect more of the same. That's also, sadly, what never dies.