“Monos” (“Monkeys”) is a beautifully shot movie about human ugliness. It’s about the thin veneer.

Which is why, I suppose, our team of eight young rebels winds up betraying the Organization. Put your team in the jungle without an overarching ideology and their ideology becomes the law of the jungle. It becomes about survival—not against the government, who can’t reach them, but against you, who can. 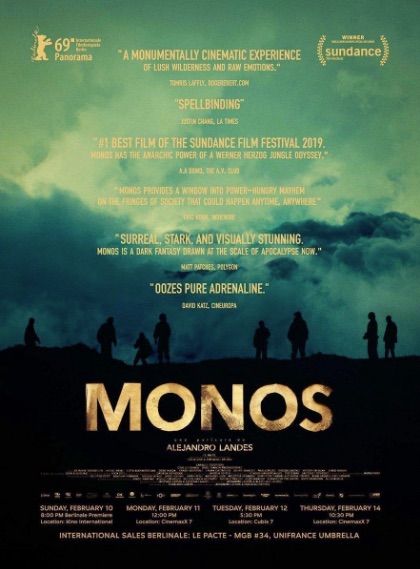 The kids start out blind, playing a blindfolded game of futbol in the mountains, in order to, one assumes, attune their senses as well as their sense of teamwork. One assumes a lot in this, by the way, since writer-director Alejandro Landes doesn’t give us much or any exposition. We never find out anything about the eight kids, for example, beyond their code names and personalities. Where are they from? Why did they get involved? Were they kidnapped? Do they have family?

Or take Doctora (Julianne Nicholson). We first see her with the girls, Lady (Karen Quintero) and Swede (Laura Castrillon), by a mountain lake, with Swede insisting on braiding her hair. Doctora is older, and Anglo, and slightly off, and after a time we assume she’s a hostage, but it’s only by and by that we know this with any certainty.

Was she always there? Even during the blindfolded futbol game? It certainly adds to the world without end quality. There’s always a government, always being defied by rebels, who always have a hostage.

What we do see introduced to the group is a cow. Messenger (Wilson Salazar), an indigenous dwarf who shows up periodically as the Organization’s voice, presents it to the group with this caveat: It’s borrowed from a sympathetic farmer and must be returned to him after hostilities are over; if it isn’t, they will pay.

They pay. The morning after celebrating the wedding of the team’s tall, handsome leader, Wolf (Julian Giraldo), to Lady, the boys wake up late and shoot off their machine guns. A stray bullet from Perro (Paul Cubides), kills the cow. Distraught, Wolf kills himself, and Bigfoot (Moises Arias) takes defacto and then sanctioned control of the team, rallying it and protecting it with this lie: It was Wolf who killed the cow. Why not? Wolf is already dead, Perro gets off, the team continues. But the lie is the snake in the garden; if it was ever a garden.

We knew Bigfoot was trouble from the get-go. His eyes burned with anger, there was a slyness in his manner, a jealousy and need in his soul. Watching, I was thinking, “He looks like a scarier version of that American actor who was in ‘Kings of Summer’ and ‘Ender’s Game’ a few years ago.” Turns out it’s him. One wonders how his Colombian accent was. Or are they even in Colombia? Either way, he is by far the most veteran actor among the kids. For the rest, save Swede/Castrillon, this is their debut.

It’s a bit that but it’s more an internal collapse—the team eating itself. Suspicions and jealousies mount. The smallest, Smurf (Deiby Rueda), isn’t paying attention and lets Doctora escape. By this time they’re in the jungle and she has a tough time of it, and anyway since the camera follows her we assume she’ll be recaptured. She is. Messenger shows up again, and during a group confessional, a kind of struggle session, secrets spill out. Some are petty (“Lady only sleeps with powerful men”), but they keep getting worse until it’s revealed that Perro killed the cow and Bigfoot orchestrated the cover-up. Taken by boat back to Organization HQ, Bigfoot shoots Messenger in the back and returns for revenge against his betrayers. In the chaos, Doctora kills Swede and escapes, as does Rambo (Sofia Buenaventura), who looks a bit like a girl because he is. Was he supposed to be a girl? Or trans?

One of my favorite moments: Rambo holes up with a family living on the edge of the forest but with all the amenities—house, electricity, TV—and on television they’re watching a report/documentary about Beethoven. “Ah, civilization,” I thought. Then it quickly becomes about the mass production of gummy bears. “Right. Civilization,” I thought.

We get some gorgeous shots in “Monos,” but do we learn much about humanity that we don’t already know? The descent isn’t particularly interesting to me; it’s the natural way. The true interest, the true struggle, is in the ascent.