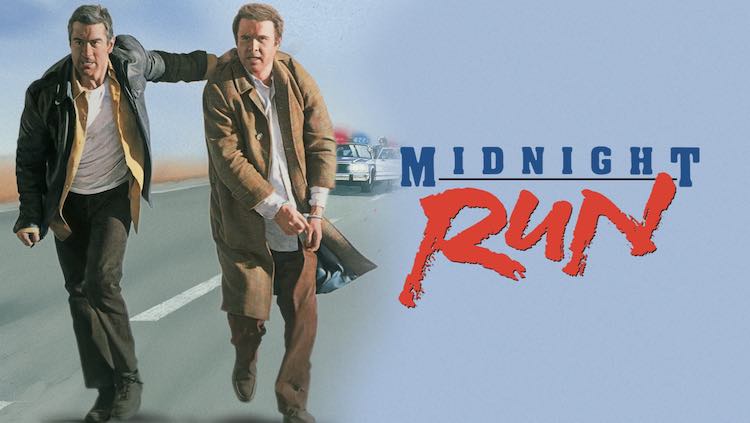 Robert De Niro plays Jack Walsh, a bounty-hunter who is offered $100,000 by his bail bondsman (Joe Pantoliano) to bring in Jonathan Mardukas (Charles Grodin). Unfortunately Mardukas embezzled $15 million from noted wiseguy Jimmy Serano (Dennis Farina) and is in hiding. Walsh has his own past with Serano, which we learn by and by, but he tracks down Mardukas fairly quickly. The trouble is transporting him from New York to Los Angeles. Mardukas refuses to fly--has a phobia--and after an incident the two board a train. Good thing, too: since the bondsman's phone has been tapped (by the FBI) and his assistant is a fink (for the mob), both the FBI and the mob were waiting for them at LAX. Meanwhile, the bondsman, worried because he hasn't heard from Walsh, sends another bounty hunter after them--John Ashton as the hilariously dimwitted Marvin Dorfler.

Misadventures multiply. Mardukas keeps initiating dialogue, hoping to get to know Walsh. Walsh, of course, wants part of no conversation, and De Niro and Grodin play off each other hilariously here. One of my favorite moments is Walsh on the phone threatening the bail bondsman. “If I find out you sent (Dorfler) after me I'm going to break Mardukas' neck and throw him in a swamp where no one will ever find him!” Mardukas, next to him, gives a start, but Walsh shakes his head slightly, scrunching his nose. Beautiful.

There's great support, not only from Ashton but Yaphet Kotto as FBI agent Alonzo Mosely, whose badge Walsh has swiped. Kotto plays it straight, as a competent officer who is repeatedly made to look the fool by Walsh. His “slow burn” is one of the best in recent years.

Grodin is the real find: the way he balances the inner-strength of his character with his almost womanly predicament--not to mention the lackadaisical, humming way he pesters Walsh. De Niro is De Niro and gives us--even in a comedy!--another uncomfortable, seat-shifting scene. Penniless and on the lam in Chicago, Walsh is forced to revisit his ex-wife whom he hasn't seen in nine years. While they argue, his daughter shows up, looking thin and vulnerable, very much an adolescent girl. The mother goes to get money and car keys and Walsh and the girl are left to fend for themselves. “So what grade are you in now?” he asks. “Eighth grade,” she tells him. “The eighth grade, really,” he says, nodding, before lapsing into a most uncomfortable silence--interminable for all that is left unsaid.