“Me and Earl and the Dying Girl,” from first-time director Alfonso Gomez-Rejon (“Glee,” “American Horror Story”), and based upon the young adult novel by first-time novelist Jesse Andrews, won both the Grand Jury Prize and the Audience Award at the 2015 Sundance Film Festival, and will draw comparisons to “The Perks of Being a Wallflower.” Both are coming-of-age stories set in Pittsburgh that make great use of the city and its bridges. Both feature nerdy guys as narrators fixated on adorable girls.

The thing we don’t want to happen 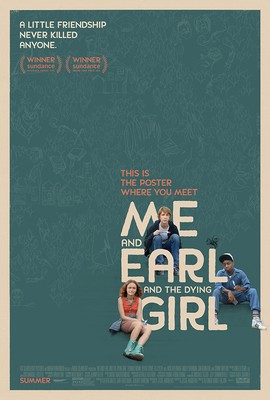 The nerdy guy here is Greg (the imposingly named Thomas Mann), who begins the story by telling us he has no idea how to tell us the story. “Bad start,” I thought. Then he tells us he made a film so bad it literally killed someone. “That’s better,” I thought.

A senior in high school, Greg has figured out how to maneuver through the various cliques by having “low-key good times” with everyone but being friends with no one. He only truly clicks with Earl (RJ Cyler), with whom he make short movies: parodies of classic world cinema, including:

So that’s me and Earl. The dying girl is Greg’s classmate, Rachel (Olivia Cooke, quite good), who has been diagnosed with stage-4 leukemia. Greg’s mom urges him to visit her. She pesters him until he does. That’s a good scene.

He and Rachel hit it off, of course. He jokes around in his goofy, adolescent way, and she appreciates the effort. She doesn’t want the deep conversation, the air heavy with import, the insulting palliative that “God has a plan.” She likes what Greg, and then Earl, have to offer. And she becomes the first regular viewer of their Criterion homages.

I related in a lot of ways to Greg—and not just for his love of movies. To write his college essay, he adopts the nihilistic tone of Werner Herzog narrating a documentary, and I actually did something similar. In these essays, you’re supposed to speak about yourself in superlative terms and I couldn’t do it (Minnesotan/Scandinavian), so like Greg I resorted to satire. I made myself ABC News’ “Person of the Week.” (I didn’t get in.)

A few things in the film don’t quite work. Rachel’s mom is played by Molly Shannon, and she goes over-the-top in that Molly Shannon way. Her comic creepiness doesn’t mesh with the film’s deeper, quieter sensibility. I also don’t get how Greg’s relationship with Rachel dooms his veil of invisibility at school. Yes, he makes enemies, but just Ill Phil and Scott Mayhew, and both dudes are already ostracized. To most everyone else, he’s still invisible.

Greg gets off some good lines (To his mom about prom: “Have you seen me in a tux? It’s like when they make a dog wear human clothes”), but a lot of his humor is, well, adolescent. Plus he can be a pill. When Rachel gives up on chemotherapy, they argue, they fight, he leaves. Then he fights Earl. Then he fights with his mom. He isolates himself from everyone because he can’t deal with what’s happening to Rachel.

The first time he says it I was relieved, because we like Rachel. A second later, I realized the movie would suffer as a result. This is true of almost every movie: The thing we don’t want to happen is what ultimately makes the movie a better movie. But for most of its history, Hollywood has given us what we want, which is why we keep getting lesser movies.

“Me and Earl” isn’t that. Its last 15 minutes are almost silent.

Death lessons
I saw the film at the Seattle International Film Festival with Gomez-Rejon in attendance, and he said that in the end, originally, as in the book, Greg gave a big speech about Rachel before the high school. It was the moment when he decided to become visible. It was, in fact, the speech that everyone who auditioned for Greg had to recite. And it was a great scene. But Gomez-Rejon felt it disturbed the mood and rhythm of the ending. It disturbed the silences, the processing, and so it had to be cut.

Question: Even though “Me and Earl” gives us what the movie needs rather than what we want, is its lesson about death still wish fulfillment?

The lesson is first relayed by Greg’s cool history teacher (Jon Bernthal), who tells him that when his father died he kept learning about him—from family and friends—so it was as if he continued on. “Life can keep unfolding itself to you as long just as you pay attention to it,” he says. Initially, Greg dismisses the lesson, as he dismisses most things; but then he experiences it.

After Rachel’s death, he returns to her room, where he discovers, on the wallpaper, little squirrels she’d drawn hopping from tree to tree. He’d noticed the tree wallpaper before but not the squirrels, and it recalls something Rachel told him about how she and her father used to take walks and count squirrels. (Greg had dismissed that story, too, with a one-liner.) Greg also discovers, in the books in her room, little dioramas she’d created out of their pages. He keeps finding out things about Rachel. She keeps unfolding, even in death.

I liked that thought when the lights went up. An hour later, I realized it was almost the exact opposite of the lessons I’ve taken from death.

For me, the death of a loved one, particularly a contemporary, forces you to deal with a heartbreaking, absolute finality. You will never see this person again. Whatever you go through in life, you will never be able to share it with them. Life may keep unfolding but they don’t. Their story ends. The movie’s lesson is nicer; I just wish it felt truer.