It gives us the superhero movie as grim, dystopian fable. Our hero is bruised, dissipated, scarred, drinking heavily. He’s a dying Johnny Cash song—as in the trailer—and doesn’t save people so much as get them killed. It’s an “end of the superhero” superhero film, as the western had its “end of the west” western, and it’s certainly the end of the Wolverine character. Well, in this timeline/incarnation anyway. Reboots sold separately.

This isn’t my kind of thing, by the way—the sad, gritty romance of all of the above—but writer-director James Mangold, and screenwriters Scott Frank and Michael Green, handle it well. Mostly. “Logan” is what “The Dark Knight Returns” wanted to be but wasn’t. It also ends with a grace note that’s really quite lovely. 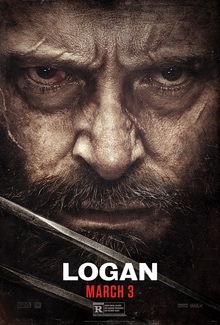 Watching the end of things, I couldn’t help but flash to the beginning of them, Bryan Singer’s “X-Men” from 2000, which jumpstarted not only this series (nine “X-Men” movies and counting), but the modern superhero genre.

Before “X-Men,” meaningful superhero movies had been the province of “Superman” (1978) and its diminishing-returns sequels,  “Batman” (1990) and its diminishing-returns sequels, and that was it. “X-Men” introduced us to the Marvel universe, computer graphics, Hugh Jackman. Back then, in both voiceover prelude and Jean Grey’s speech before Congress, mutants were seen as “the beginning of another stage of human evolution.” Great concept, but the series spent years squashing it. In last year’s “X-Men: Apocalypse,” we find out that the most powerful mutant of all was actually born millennia ago in ancient Egypt, so our X-Men were hardly “the beginning.” They were hardly a “next stage,” either, since here we discover that, a la “Children of Men,” no new mutants have been born for nearly 20 years, and the rest have been wiped out. It’s the year 2029 and we’re down to three: Logan/Wolverine (Hugh Jackman), who is slowly being poisoned from within by his adamantine skeleton; Professor X (Patrick Stewart), who is suffering various stages of dementia, and who has killed off most of his students with a mental attack/seizure a year earlier; and Caliban (Stephen Merchant), whose mutant power is to sense other mutants—a useless power in this now mutant-less world.

Logan spends most of the movie fighting its plot. His initial plan is to make enough money as a limo driver in Texas to buy a boat, “the Sunseeker,” and sail away with Prof. X forever. We’re never sure why this is the plan. So he can leave the dust of Tex/Mex? So he can get the addled, dangerous Xavier away from as many people as possible? Because it sounds cool?

Either way, when the linchpin to the story, Gabriela (Elizabeth Rodriguez), approaches him at a funeral (he’s under a tree, drinking, in the rain), he angrily dismisses her, and only agrees to drive her and her 11-year-old daughter to “Eden,” North Dakota when he’s offered $50k. Then she shows up dead in her motel room and the daughter can’t be found; but even then Logan doesn’t get involved. He’s only pulled into the plot because the daughter stows away in his limo, and a corporate, proto-military security force, led by Pierce (Boyd Holbrook of “Narcos”), follows him back to Mexico.

I’ll cut to the chase: The girl, Laura (Dafne Keen), isn’t Gabriela’s daughter but Logan’s. She was bred in a lab with his DNA, as others were with other mutant DNA. She’s angry, fierce, deadly, snkt. You’d think it would be love at first sight, but Logan spends most of the movie complaining. He’s always been a reluctant hero but his obstinance here is annoying. He resists when he shouldn’t (going to “Eden,” when there’s no good alternative), and acquiesces when he shouldn’t. On a freeway in Oklahoma, for example, a family’s horses get loose, and Prof. X convinces Logan to help out. Sure, why not? Then he convinces Logan to accept dinner and lodging with the family. Um, you do realize people want to kill us? These people could get hurt. Guess what? They do. Father, mother and son are all killed—because of our heroes. Prof. X also buys it (his last lines are about the “Sunseeker”), while Caliban, tortured into tracking Logan/Laura, blows himself up. Then it’s off to Eden.

Should I bring up “Shane” here? The 1953 western makes several appearances in the film: Prof. X and Laura watch the movie in an Oklahoma City hotel room, and Laura recites its dialogue over Logan’s grave at the end. We get it. It’s Logan as modern (or futuristic) western hero. But here’s the contrast: Shane actually saved the Starrett family; he wasn't the instrument for their deaths. Worse, no one comments upon their deaths; there's no mea culpa. Once they're out of the picture, well, they're out of the picture.

Logan, come back
“Logan” has other problems, too. For one, the whole “recreating/controlling mutants in a lab” thing. Here's a list of ways humans have dealt with “the mutant problem” over the years:

The scheme of Dr. Rice (Richard E. Grant) in “Logan” is most like Stryker the Younger, but more idiotic. Apparently Rice thinks that by using dictatorial powers and corporal punishment, he can raise super-powered children in small, fluorescent-lit rooms and they’ll do whatever he says. Maybe he should’ve checked first with, I don’t know, every parent who’s ever existed.

As for the final battle along the Canadian border: Pierce’s paramilitary force, known as “The Reavers,” is pursuing the mutant kids, little versions of Ice Man and Storm and Magneto, through the forest. But aren’t these kids like 100 times more powerful than their pursuers? So why don’t they just turn around and fight? Which they do, eventually. It just takes time. Meanwhile, everyone in the audience is thinking what I thought.

What works? The acting is top-notch, particularly Stewart. Merchant makes a sympathetic Caliban, Holbrook a good nasty-piece-of-work, and newcomer Keen is a startling good 11-year-old Wolverine. Not a fan of Logan’s full beard (too latter-day Mel Gibson), but the dialogue is sharp throughout. It's got a soul amid all the skewerings. I also like the use of the “X-Men” comic books as 21st-century versions of the pulp novels of 19th-century western heroes: real people, exaggerated exploits. You could say that when legend becomes fact, Marvel printed the legend and Mangold filmed the fact.

Most dystopian stories, too, rely on a central government that’s either omnipresent (the totalitarianism of “1984”), or non-existent (the anarchy of the “Mad Max” movies), while  this one seems based on economic inequality. Poverty is everywhere but fratboys and bachelorettes can still hire limos to whoop it. The police don’t seem to be around but corporations can hire well-armed, cybernetically enhanced security forces. The center hasn’t held.

Wolverine, of course, eventually comes around and goes out in a blaze of glory. The grace note for me is at his gravesite, where, with the other mutant kids heading north to Canada (and future movies?), Laura remains momentarily behind; then she lifts out their handmade cross, two thick twigs tied together, and places it back at an angle: less cross now than “X.” A fitting end for a beloved character.