So was the point that the movie contained some of the tropes of movies—awkward romance, crazy escapades—but was as plain and pointless as life? The dude in the 12 jersey isn’t like Altman’s assassin in “Nashville” or Scorsese’s in “Taxi Driver”; he’s not anything. He’s just standing there or sitting there. Our aimless heroes aren't quite Brad and Angelina and they never quite find aim; they just find each other, finally, running around Encino searching until they literally run into each other’s arms like in a movie—even meeting in front of a movie theater playing “Live and Let Die” and “The Mechanic”—but unlike in a movie, or unlike a romance but definitely like a comedy, they crash and fall into a heap. And then he blows it again at his blowout pinball-arcade opening by introducing her as his wife—her first name, his last—and she insults him and storms off. But no, this time they kiss and make up. This time they kiss. Hey, they kiss! And so it begins.

That’s part of the controversy of the film, I guess, and obviously it wouldn’t even have been made if you’d reversed the genders; but watching, it doesn’t feel controversial. Maybe because the actor playing the 15-year-old is closer to 20, and looks it, and the actress playing the 25-year-old, while closer to 30, could easily pass for early 20s.

On our last episode… 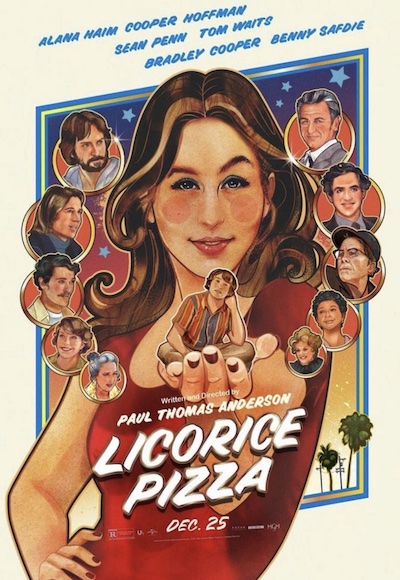 It’s episodic, that’s for sure. How would you break down the film?

Each episode kind of relates to the others. He’s a successful child actor until he isn’t. Then he’s an entrepreneur. He sees a waterbed in the back of a wig store and starts his own business. Then at a teen fair he’s arrested for murder? And released? And nothing? Then it’s the gas crisis and, oops, their waterbeds are petroleum-based. So much for that. Then it’s the coked-up Jon Peters crisis and its various hijinks. Then she gets into politics and he pinballs.

And thanks for coming.

You can unpack the oddness of this movie forever. One small example from the above: What is a waterbed doing in the back of a wig store? And how the hell does he spot it from the street outside? And what’s going on with the sales technique of Wig Shop Brenda—an impossibly hot Iyana Halley doing a Claudia Lennear thing? Or is that the way waterbeds were sold back then? The sex, or intimations of sex, are free-flowing throughout the movie in a way that’s false like a movie trope (hot girls coming onto schlubby guys) but also feels correct for the period. It's the messy aftermath of the sexual revolution. Before the reign of terror.

I assumed this was autobiographical by time and place—the older auteur recalling his youthful craziness—but it’s set in 1973 and Paul Thomas Anderson was born in 1970. This isn’t his time. He was 3. But it is his place. The movie’s got all the weirdness and aimlessness of the San Fernando Valley between Manson and Moon-Unit Zappa.

Is there anything to the unfamous actors with the famous names? Is that a Valley thing? The cast list includes DiCaprio, Spielberg and Nicholson, but it’s George (Leo’s dad), Sasha and Destry Allyn (Steven’s kids) and Ray (Jack’s son). We get Tim Conway Jr. in a small role. And in the leading role, making his motion picture debut, is Cooper Hoffman, the son of Philip Seymour, playing 15-year-old Gary Valentine. He’s quite good. So is rocker Alana Haim playing 25-year-old Alana Kane, whose cinematic family is her real family. Mother, father, two sisters: all Haims.

Many of the actors looked familiar, too. I kept thinking, “Where do I know that dude from? Can’t wait to IMDb him.” When I did, I didn't know him. Is that what it’s like growing up in the Valley? You think you know that dude but you don’t. But everyone you meet is related to someone more famous.

If there’s any kind of connective tissue to the episodes, it’s that she keeps meeting men who drive her back to Gary: the ass-slapping photographer, the atheistic Jewish kid actor (Skyer Gisondo, good), the drunk matinee idol (Sean Penn, fantastic), Jon Peters (Bradley Cooper, SAG-nominated), the closeted politician (Benny Safdie). Every time, she’s like, “I’m ready to become an adult finally,” and then they use her. Even the gay one. “I don’t need you, I need a beard.” Whatever their game is, she’s a pawn in it, while she’s Gary’s world. After the drunken motorcycle stunt, everyone runs to see if the former matinee idol is OK but he runs to her. He’s the only one who runs to her. He keeps running to her. He keeps running. So does she. There’s a lot of running in this, until, pop, they run into each other.

I’m not looking anything up—interviews with Anderson in which he says “Oh, I did this for that reason, and that for this reason.” I like living in the questions. Begin with the title. What does it mean? Is she licorice and he pizza? Why would you put them together? They shouldn’t go together. But there they are.

Down in the valley
Anderson doesn’t make many contemporary movies, does he? “Magnolia,” “Punch-Drunk Love” and maybe “Hard Eight.” Otherwise he’s turn-of-the-last-century (“There Will Be Blood”), post-WWII/1950s (“The Master,” “Phantom Thread”) and various versions of the Valley in the 1970s (“Boogie Nights,” “Inherent Vice,” this one). That’s a helluva oeuvre, by the way. There’s oddities there but not one movie where you thought it was a waste of time.

I’d like to see “The Master” again. I’d like to see “Inherent Vice” again. Those are his lowest-rated films according to IMDb users. Which I kind of get. Like this one, they don’t quite cohere in any familiar way. I wonder how they cohere in Anderson’s mind? Or if he thinks cohering is the opposite of the point.