We know going in that Kurmanjan Datka (played by the lovely Elina Abai Kyzy for two-thirds of the movie) will unite the 40 tribes of modern-day Kyrgyzstan and become legendary. But as the movie begins, our heroine is just a small, unwanted girl in a 19th-century, mountainous, patriarchal society who doesn’t even get to choose her own husband. So how does she do it? How does she attain power?

Turns out the way Corazon Aquino and Isabel Peron attained power: through the death of their husbands. 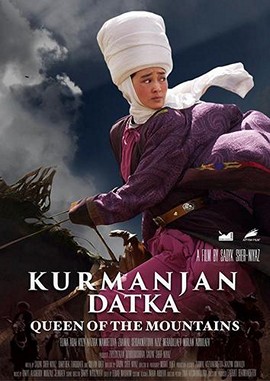 Second question: What does she do that’s so legendary? According to the film:

That’s about it. According to the film.

Hold ‘em, fold ‘em
I mostly went to see “Kurmanjan Datka: Queen of the Mountains,” which played at the 2015 Seattle International Film Festival, because I knew so little about the country.

Kyrgyzstan is, to put it mildly, interestingly situated. Its people look like Asians, dress like Mongols, practice Islam, and are forever menaced by Russia. According to title cards at the beginning of the film, the country was united in the 9th century but slowly broke apart. It took Kurmanjan to unite it again. I think.

There’s still a lot of things I don’t quite get. Her arranged marriage turns out to be with a weakling, who .... can’t seal the deal on honeymoon night? Is that the implication? And does he send Fatty to take over or does Fatty do this on his own accord when hubby can’t break a stick by the fire? And does Fatty rape her, or is he stopped when she throws water in his face?

The real Kurmanjan fled to China, initially, but in the movie she simply returns to her family, who are ostracized for her impertinence; tribal chiefs are summoned to pass judgment. The local feudal lord, Alymbek Datka (Aziz Muradillayev), also arrives, and he passes judgment: He likes this feisty woman; he takes her for his wife.

But everyone’s got a boss. Apparently the Datka reported to the Kokand khanate, which was made up of the modern-day stans: Kyrgyzstan, Uzbekistan, Tajikistan and southern Kazakhstan. When Alymbek tries to unite some of the Kyrgyz tribes, he’s assassinated. Then Kurmanjan rallies the troops and they win independence. Then the Russians arrive and they lose independence.

That’s pretty much the movie, and from an outsider perspective it doesn’t quite gel. Kurmanjan is legendary because she allowed Russia to annex their land? But it makes sense in this way, and please forgive the puny analogy, but it’s all I’ve got. For me, whenever I’ve been promoted in a corporate environment, it often feels like I have less power. I should feel the opposite but don’t. The higher I go, the weaker I feel. Maybe here, too. She rose to a level where the opposition was Russia, and to fight Russia was to invite extermination. So she didn’t. She knew when to hold ‘em and when to fold ‘em.

How a country portrays itself
“Kurmanjan Datka” is not a very good movie but you admire the effort it took to make it. (The Guardian has a good article on why “Queen of the Mountains” was made and the controversies surrounding its production.) And its two leads do have a movie-star presence. Elina Abai Kyzy is beautiful, while Aziz Muradillayev has something of Chow Yun Fat in his calm manner and amused eyes.

Plus it’s always interesting to see how a country portrays itself—particularly one that has had little opportunity to do so.