The Hulk is the ultimate fantasy figure of the weak and average. One moment he’s a normal dude, Bruce Banner, a scientist; the next moment, he’s a huge, muscle-bound, inarticulate rage machine that can destroy anything in front of him. He is rage personified. He is how we like to envision our own rage. We like to move through the world thinking, “Don’t make me angry; you wouldn’t like me when I’m angry,” when, let’s face it, almost no one is scared if we become angry. Our rage is generally impotent. We destroy nothing in front of us.

So if you’re going to create a movie that taps into the Hulk fantasy, under what circumstances would you have Bruce Banner hulk out? When provoked by bullies? Criminals? Authority figures?

Here’s what causes Bruce Banner (Eric Bana) to morph into the Hulk in Ang Lee’s “Hulk”:

Only 2) comes close to what we want.

That’s not even the worst part. Here’s the worst part. Between incidents 2) and 3), Talbot, as battered as Evel Knievel after a bad jump, returns to provoke Banner again in the hope of finding out more about the Hulk gene. He tasers him—once, twice, five times. Then he decks him. Nothing. “Consciously you may control it,” Talbot tells Banner’s supine figure. “But subconsciously? I bet that’s another story.”

Consciously you may control it? The whole point of the Hulk is that you can’t control it. If Bruce Banner could control it, you wouldn’t even have a story. 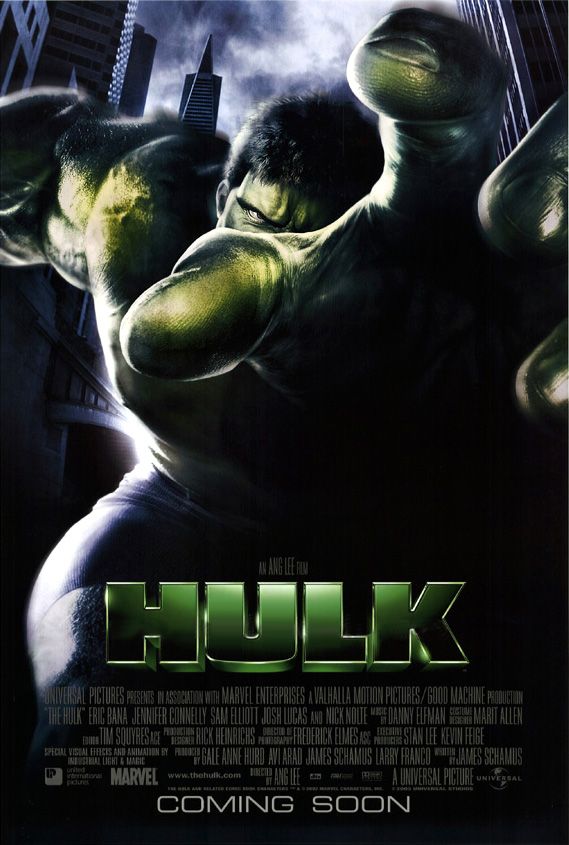 I’m sorry to harp on this, but of all the stupid ways a modern superhero movie has deviated from the source material, this is one of the stupidest. I’d call it the second stupidest—right after the way filmmakers exonerated the Burglar for the murder of Uncle Ben in “Spider-Man 3” and thus ruined Spider-Man’s whole raison d’etre. Don’t get me started on that one.

I watched Ang Lee’s “Hulk” again recently with the thought that maybe we were all being harsh when we dismissed it back in 2003. It was the movie Lee made between “Crouching Tiger, Hidden Dragon” and “Brokeback Mountain.” How bad could it be?

Awful, it turns out. Horrible. Lee takes a fairly simple story and complicates it with angry, unforgiving fathers, a nothing romance, a non-entity for a protagonist, and zippy split-screens and quadruple screens, popular in 1960s art-house cinema, but here representative of comic panels. Except they just get in the way.

We begin in the mid-1960s with military scientist David Banner (Paul Kersey), against orders from Gen. “Thunderbolt” Ross (Todd Tesen), intent on manipulating the human immune system. After he experiments on himself, his wife tells him she’s pregnant. Oops. And yes, he passes the genetic modification on to his son.

The sins of the father grow worse. He treats little Bruce like a science experiment. He takes away his binky and watches his skin turn vaguely green when he bawls. WHAT HAS BEEN PASSED ON? he writes. He gives him monsters to play with then studies his blood. CONFIRMS MY WORST FEARS, he writes. Before he can cure him, though, Ross fires Banner for ignoring protocol, and in response Banner ... launches a gamma bomb? Is that right? How does a scientist get the authority to do that? And what does that green mushroom cloud have to do with anything? Is it to distract everyone so Banner can return home and kill his son? Instead he knifes the mother right in front of the son. “It was as if she, and the knife, merged,” the older, more bat-shit Banner (Nolte) says, later, in one of the film’s good lines. “You can’t imagine the unbearable finality of it.”

But Bruce, already a bottled-up child, represses the memory (we don’t see the knifing until the third act), gets adopted, and becomes a scientist like the crazy dad he doesn’t remember. We’re nearly 12 minutes in our seats, our popcorn nearly gone, before we see the adult Bruce shaving in his mirror, biking to work, and remaining emotionally unavailable to the best-looking scientist who ever walked the planet, his ex, and lab partner, Betty Ross (Jennifer Connelly at her most smoking). Yes, “Thunderbolt” Ross’ daughter. Small world.

Smaller world: They’re trying to improve the human immune system, too! Just like David Banner! He killed a monkey in the process, they explode a frog or two. Then Banner’s assistant stumbles, sets off the gamma radiation, and Bruce purposefully takes the brunt of it. Cue muffled g-bomb explosion inside him. Nice effect, actually.

In the hospital, Bruce has two visitors: Betty, who cries, and complains, and doesn’t acknowledge his bravery (which would totally suck); and the new janitor with his crazy hair and mean dogs, who turns out to be Bruce’s biological and bat-shit dad (ditto).

For some reason—repressed memory of the killing of the mother?—Bruce gets really pissed off by the presence of bat-shit dad. In fact, back in the lab, it pisses him off so much he turns into a giant green monster. This occurs without any provocation from anyone and 42 minutes into the film. Talk about a downer.

It gets worse. The crazy father who wanted to save his son from genetic mutation has become the crazier father who wants to save the genetic mutation from his son. In this endeavor he sees Betty as an obstacle (he’s right: she can tame the Hulk) and so sics giant dogs, including a giant French poodle, on her. But Bruce hulks outs and battles them. Then in a quiet moment in her battered car, Bruce, not the Hulk, but Bruce almost chokes her. Nice. Is this why she betrays him to her father (now Sam Elliot), who locks him up? But Talbot’s dickish ways unleash the Hulk again, who escapes and goes bouncing around the American southwest pursued by army helicopters. He winds up in San Francisco, where the battle between a giant green creature and the U.S. military draws many onlookers, zero news cameras and one hot female scientist. When Hulk sees Betty, he goes from a huge, engorged creature to something small, limp, and vulnerable. It’s the anti-Freudian stance. Hulk is angry but innocent. The monster inside us is actually sweeter than we are.

This sets up the final, crazy showdown between the Banners, and the epilogue in Central America. “No me hagas enfadar; no te va a gustar cuando este enfadado.” These 30 seconds are the best part of the movie.

“Hulk” isn’t all bad. I like Bruce’s early admission to Betty, “You know what scares me the most? When it comes over me, and I totally lose control... I like it.” Connelly is good, too. Her flirtations with Bruce are fun, but they run into the blank wall of his character and dissipate.

Other than that, “Hulk” is an overlong, poorly edited, poorly directed, pointless mess. It wants to say something deep and winds up saying nothing.

Even the writing team of James Schamus (“Crouching Tiger, Hidden Dragon”), Michael France (“Goldeneye”) and John Turman (uh... “Fantastic Four: Rise of the Silver Surfer”) disappoint. Early on, before anyone Hulks out, Talbot wants to buy (take over) Bruce and his research team. Bruce refuses. They lock eyes. Then they have the following exchange:

Talbot: You know, someday I’m going to write a book. And I’m going to call it ‘When Stupid Ideals Happen to Smart Penniless Scientists.’
Bruce: Wow, that’s a shitty title.
Talbot: No, the point is—
Bruce: Why not “Smart Scientists, Stupid Ideals”? Isn’t that simpler?
Talbot: Listen, I’m—
Bruce: You call yourself a businessman? You don’t even know how to sell anything.

Kidding. That’s my rewrite. Here’s how the scene really played out:

Talbot: You know, someday I’m going to write a book. And I’m going to call it ‘When Stupid Ideals Happen to Smart Penniless Scientists.’
Bruce, fuming, stares at Talbot, who leaves.