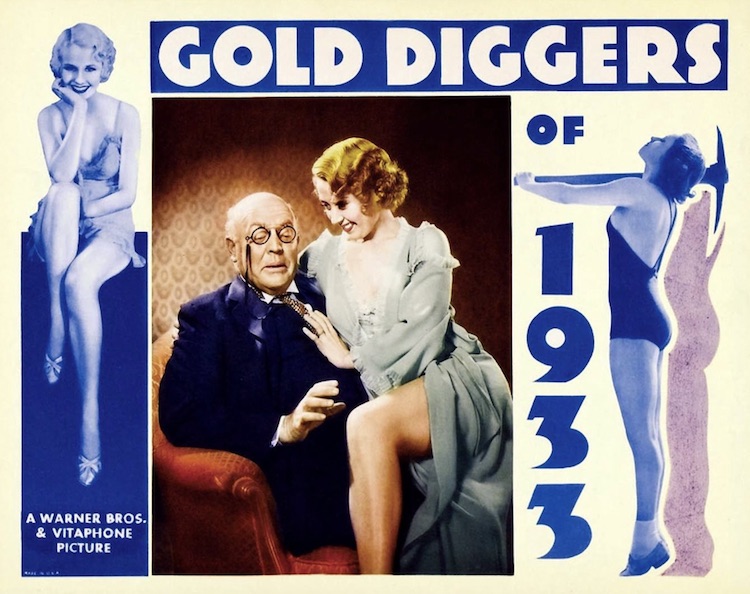 Oddly, Blondell and Kibbee are never canoodling, but if it‘ll sell tickets...

Over the years, I must’ve seen the musical number “Remember My Forgotten Man,” which plays at the end of “Gold Diggers of 1933,” half a dozen times without ever seeing the movie itself. It’s a Busby Berkeley paean to Great War vets, unneeded and dismissed in the early years of the Great Depression, and the woman (Joan Blondell) who stands by them. I’ve seen it so often because it’s one of the musical numbers Martin Scorsese talks up in his great 1995 BBC documentary “A Personal Journey with Martin Scorsese Through American Movies.” He talks about different genres (western, gangster, musical), and he's not exactly an MGM man. Plus the themes of the “Forgotten Man” are similar to the themes in another movie he talks up, Raoul Walsh’s “The Roaring Twenties,” where the forgotten man is WWI vet, ’20s gangster and ’30s hobo Eddie Bartlett, played by James Cagney.

All of this got me thinking about the concept of the “Forgotten Man,” particularly as it related to WWI vets. When did it take hold? I searched for mentions in The New York Times archive and came away with this. It’s the number of mentions in each year:

What happened? FDR happened. Running for president, he mentioned it in a speech in April and it took off:

These unhappy times call for the building of plans that rest upon the forgotten, the unorganized, but the indispensable units of economic power—for plans like those of 1917 that build from the bottom up and not from the top down: that put their faith once more in the forgotten man at the bottom of the economic pyramid.

Interesting that initially it’s not specific to Great War vets. Imagine what would happen today if a politician tried something similar: the howls of protest from the right (“How can Roosevelt stoop so low as to politicize our war vets?”) and from the left (“What about forgotten women?”). Maybe there was a bit of that then, too.

Barney & Friends
Anyway, I enjoyed “Gold Diggers of 1933.” It's zippy and brassy and risque. They’re not really gold diggers, by the way, just accused of it. The poster implies that they’re scantily clad and on the prowl when really they‘re scantily clad and perpetually underestimated.

It opens with a big musical number at odds with the times, “We’re in the Money,” focusing on lead singer Fay Fortune (Ginger Rogers), which is at odds with the movie. Fay is not one of the three we root for; she’s the snooty fourth. But she was dating director Mervyn LeRoy, and she had the pipes, so she sings the opener. It’s absurd and fun: Near-naked women wear big coins in strategic spots. At one point, Fay sings the song in Pig Latin. But then the cops arrive and shut down the show because producer Barney Hopkins (Ned Sparks) hasn’t paid the bills.

Cut to: Our three girls lazing in bed rather than rising for another day where nothing happens because none of them can get jobs. Trixie (Aline MacMahon) is the cynical grifter who steals milks from a neighbor’s windowsill. Polly (Ruby Keeler) is the doe-eyed singer in love with Brad Roberts (Dick Powell), the smiling piano-playing songwriter across the courtyard. And Carol King (Joan Blondell) is the tough leader.

Soon they hear a big producer is putting together a new show, and they all get excited. Which big producer? Barney. Me: Wait, isn’t he the guy who couldn’t pay the bills on the last show? Why would this one be any different?

And it isn‘t. He says they’ve all got parts (yay!), and now if he could only get the money together (huh?). As they complain about the letdown, Brad across the courtyard begins playing his piano and Barney immediately recognizes his talent. He wants him to create songs for the show—and sing in it, too! Me: Wait, Barney didn’t even have songs for the show? What exactly did he have?

Brad’s cool with the songwriting gig but draws the line at performing. He won’t say why. Oh, and he can bankroll the production, too. In cash. $15k. Here you go.

Immediately Trixie thinks he’s a bank robber—that’s why he has dough and doesn’t want to show his face. Polly isn’t sure what to think but stands by her man. As often happens in’30s musicals, on opening night the nondescript and lame-ass male lead can’t go on (here: lumbago), so Brad has to take over. And he’s a sensation. And he becomes known. Turns out he isn’t a bank robber but a Boston blueblood, and before you can say Jack Robinson his older brother, J. Lawrence Bradford (Warren William), and their lawyer Fanuel H. Peabody (Guy Kibbee), descend on New York to make sure young Brad isn’t taken for a ride by any of these floozies. So of course both men get taken by these floozies. First they assume Carol is Polly and try to put a stop to their relationship. Instead, J. Lawrence falls for Carol (and she for him) and Fanuel/Fanny falls for Trixie (and she … ?).

Several weddings, implied and otherwise, and then the big “Forgotten Man” musical number to remind theatergoers the world they live in. The End.

So we go from “We’re in the Money” to “Remember My Forgotten Man.” Ain’t that America? 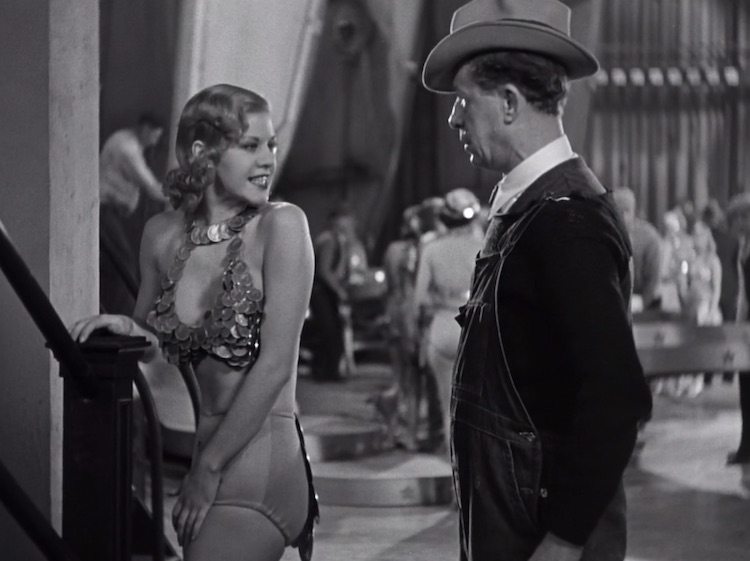 Rogers, losing money: “You could at least leave me car fare.”

This is still pre-code Hollywood, not to mention Busby Berkeley, so there’s a lot of titillation—including a sheriff’s deputy taking most of Ginger Rogers’ costume; the girls in the “Park” number protected by a metal swimsuit until Dick Powell gets out the can opener; and Blondell near-naked before the dressing mirror.

The “Pettin’ in the Park” number includes an interesting sweeping shot that takes in other canoodling couples besides Powell and Keeler. For the time, it’s a rather diverse bunch:

Sadly, the Asian couple is way in the background while the black couple is comic relief. An older couple has a baby in a stroller (Billy Barty) who shoots peas at the man (Fred “Snowflake” Toones), who reacts all bug-eyed. The woman, concerned, remains classy; she’s Theresa Harris, whom I wrote about 10 years ago, looking as stunning as ever.

The Barty stuff is weird, and echoed in the later James Cagney vehicle, “Footlight Parade”: a lot of leering and eye-rolling. Sterling Holloway has a short, comic walk-on as a messenger. And Jane Wyman, Ronald Reagan’s first wife, is apparently one of the gold diggers. Not sure if there’s a lesson there. 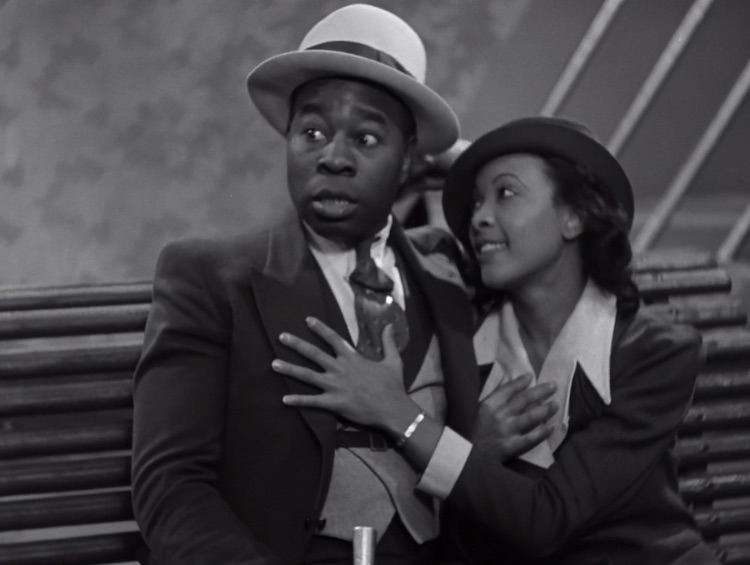