I don’t know about God but godawful is very much alive.

Haven’t heard of this movie? It’s already grossed $33 million against a budget of $2 million. Conservative Christians are out in force. Too bad. There are better movies for them to see. Pretty much anything, to be honest, but if they’re looking for something Christian-y, then “Noah” isn’t bad. If they want to be stunned by spirituality and artistry and beauty, then, you know, the usual recent suspects: “The Tree of Life,” “Rust and Bone,” “L’heure d’été.” But these are movies that raise questions rather than give self-satisfied answers. They embrace the mystery rather than have a college freshman solve the origins of the universe. 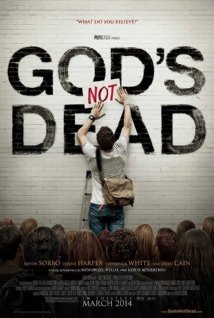 On the first day of college, freshman Josh Wheaton (Shane Harper), a tall, bland, nothing of a kid, greets his hot blonde Christian girlfriend as asexually as possible, then heads to Philosophy 101, where Prof. Radisson (conservative Christian, and former Hercules, Kevin Sorbo), he of the Mephistophelean goatee, shows the kids a list of famous philosophers, including Bertrand Russell and John Stuart Mill, and asks what they all have in common. Answer? They’re all atheists! So is Radisson! He’s such an atheist he demands that each student write on a piece of paper “God is dead,” and sign it, or they’ll get a failing grade. After some vague screwing up of his face, Josh politely refuses. He feels like it’s wrong. So he strikes a bargain with Mephistopheles. If he can convince a majority of the class, in three presentations over the next three weeks, that God is not dead, he’ll be allowed to continue the class. If he doesn’t, he’ll fail, and his dream of law school will go up in fire and brimstone.

This is the main, awful plot of “God’s Not Dead.” But don’t worry: there are other, awful subplots, too.

For example: A conservative Muslim father makes his super-pretty daughter, Ayisha (Hadeel Sittu), wear a hijab to school, which, when he’s out of view, she takes off and exhales like she’s just been given a new life. Which she has. A year ago, she accepted Jesus Christ as her Lord and Savior. She lays in bed and listens to Corinthians on her smartphone. How to tell this to Dad? She doesn’t. Kid brother blabs. At which point, amid great histrionics and crying jags, Dad physically beats his daughter and throws her out of the house. Because you know Arabs. I mean the Muslim ones. Not the super-pretty ones who have already accepted Jesus Christ as their Lord and Savoir.

There’s also a nerdy Chinese guy named Martin (Paul Kwo). He’s in the same class as Josh, or “Mr. Josh,” as he charmingly calls him in the manner of the backward Oriental. He, too, likes Jesus, despite, you know, growing up in communist China—represented here by his businessman father riding in the back of a limo. But eventually Martin tells his father about Jesus. He does so in Cantonese even though his father speaks Mandarin. I guess the Lord speaks in many tongues.

Let’s get the rest of this out of the way quickly, shall we? So Prof. Radisson’s put-upon girlfriend, Mina (Cory Oliver), his former student no less, is Christian, too, but her Mom’s in a home with dementia and her older brother, Mark (Christian conservative, and former Superman, Dean Cain), is too busy being an asshole of a lawyer to care. Plus he’s dating this ... entertainment blogger? I was never sure. Her name is Amy Ryan (Trisha LaFache), and she’s, you know, rude and late in the manner of non-believers, and has bumper stickers on her car reading things like “Meat is Murder” and “American Humanist.” (Right? Because I see that “American Humanist” bumpersticker everywhere.) Plus she engages in ambush journalism like Bill O’Reilly but from the left. She tries it, for example, on Willie Robertson of “Duck Dynasty” fame, who is just trying to worship at the local mall Worship Center. But Willie’s cool with her rudeness. He can take it. He’s also cool with Jesus Christ, the Lord, which she totally doesn’t get. Until, that is, she’s diagnosed with inoperable cancer. At which point her asshole boyfriend dumps her, she can’t write for crying, and, when she tries ambush journalism on the Christian rock group Newsboys, they pray for her and convert her backstage. Then they put on a show before Mina, Ayisha, Josh and Martin, and dedicate their song, “God’s Not Dead,” to Josh, “the defender of God,” while they encourage everyone to text “God’s not dead” to all of their friends, even as, across town, Prof. Radisson lays dying in the street after being hit by a car.

Josh vs. Aristotle, Darwin, Hawking
So ... a philosophy professor who makes his students write and sign “God is dead” pledges? Is this based on anything anywhere? Wikipedia calls it a popular urban legend, but I might dispute both “popular” and “urban.” To me, it feels like projection. Philosophy is generally about the search for truth, not shutting down that search. The shutdown comes from absolutists.

The final credits suggest the movie is based upon many legal cases supported by Alliance Defending Freedom (formerly: Alliance Defense Fund), most of which, apparently, it lost.

Josh, of course, doesn’t lose. He defeats his Mephistophelean professor. How? By taking on Aristotle, Darwin and Stephen Hawking single-handedly—like Daniel in the lion’s den. By offering the students, as God offered humanity, free will.

He also uses science to his advantage. Josh says the Big Bang is like “Let there be light” more than scientists will admit, while the creation of life on Earth is more like Genesis 1:21 than Darwin’s evolutionary theories. After that, it’s mostly gotcha moments. Sure, Hawking said what he said about religion, but he also said, “Philosophy is dead,” which totally burns the philosophy professor. The biggest gotcha, though, is personal. Why does Prof. Radisson feel how he feels about God? Because when he was 12, his mom, a believer, died of cancer, so he cursed God, and has kept on cursing God, and wants the world to curse God. Josh, in fact, gets his professor to admit, in front of everyone, that he hates God. Which leads to Josh’s final trump card:

How can you hate someone ... if they don’t exist?

That’s the final straw for the straw man. He folds. And that’s when the class, in a “Spartacus” moment, all stand and say the film’s triumphant title: “God’s not dead.” Then they all go to the Newsboys’ concert and party while, nearby, Prof. Radisson dies after being hit by a car. No, it’s not vindictive. At the last moment, Radisson is converted by Rev. Dave (Christian movie staple, and bad hair-dye model, David A.R. White). Radisson accepts Jesus Christ as his Lord and Savior. Because there may be atheists in college classrooms, but there are none on deathbeds.

Nice and comfy
What a sad thing this is. I’m agnostic but this will convert no one. It’s a tepid bath for true believers.

I did like one scene. Near the end, the asshole lawyer, Mark, finally visits his addled mother in the old folk’s home, and wonders aloud why he, who is the worst person he knows, has a great life, while she, the most devout, has been turned into a living vegetable. At which point she suddenly starts talking:

Sometimes the devil allows people to live a life free of trouble because he doesn't want them turning to God. Their sin is like a jail cell, except it is all nice and comfy and there doesn't seem to be any reason to leave. The door’s wide open. Till one day, time runs out, and the cell door slams shut, and suddenly it’s too late.

She says all of this staring straight ahead. When she’s done, she blinks a few times, then her dementia returns. “Who are you?” she asks her son.

But think about how her words relate to “God’s Not Dead." The movie is popular with Christian conservatives because it’s their wish-fulfillment fantasy. Within it, secularists are awful and tyrannical but are punished, while believers are victimized and humble but prosper. No wonder they're going in droves. It’s a nice, comfy vision from which there doesn’t seem to be any reason to leave.