At first I didn’t understand that Amin (our real-life protagonist, under an assumed name), laying on a couch and talking with his friend and filmmaker Jonas Poher Rasmussen, was a bit of an unreliable narrator. Like when he said he had no family left. That’s the lie the human traffickers—the good human traffickers—told him to say when he arrived as a teenager in Copenhagen; it would help him remain there.

What I never quite got, though, was how much of his story Amin was keeping from himself. Obviously he knew he had family. He visited some of them in Sweden. So when he was on the couch, was he just so used to the lie that it came more naturally? Or was he still afraid of being sent back to Moscow? Or Kabul? Or was it deeper than that?

Told via animation and historic footage, “Flee” depicts three ways Amin comes out: as a refugee from Kabul, Afghanistan shortly after the mujahideen took over; as a young gay man in Copenhagen, Denmark; and revealing his true story to Rasmussen, and to us, and maybe to himself. 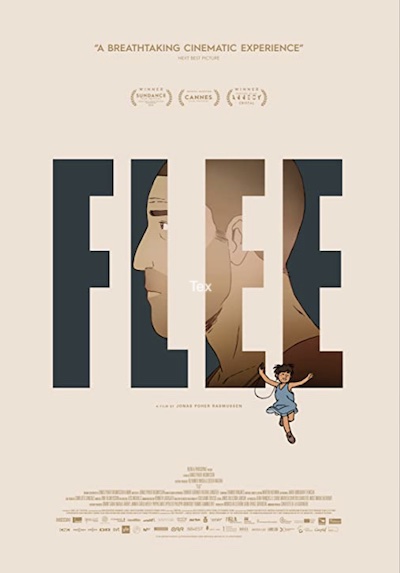 Chronologically, it begins with Amin as a young boy, wearing a dress while running around Kabul as A-Ha’s “Take on Me” plays on the soundtrack and on his walkman. It seems to be the last days of the Soviet occupation—a time of promise, one would think. But then the mujahideen, who mostly fought in the mountains, take over Kabul, and Amin’s father, a military officer, goes into hiding. At one point, Amin’s older brother is conscripted/shanghaied. Isn’t that him looking forlorn in the back of the military truck? Yet when Amin returns home, he sees his brother there. Mistaken identity? Unreliable narrator? Or just the sense that, growing up as Amin did, nothing is reliable.

It certainly isn’t when mother, brother and Amin escape to Moscow. There, as undocumented refugees, they hide out in small rooms watching Mexican soap operas while they make enough money to pay traffickers to take them to Sweden, where Amin’s older older brother lives. Or … could they work? I guess that’s murky, too. Maybe the money came from the older older brother.

But finally they go, in the middle of the night, being herded along with a large group by a man with a brutish face. In Estonia, the march is long and an old woman is slowing them up; she can’t make it. Will she be shot? No, several refugees carry her in a blanket to the port. But each step in the journey carries its own dangers. And in the ship they’re locked in the hold like in a metal tomb.

OK, up to this point, I thought the movie was fine if unspectacular. The animation was a bit crude, the story a bit familiar. Even this part was familiar. It’s how Ivan Reitman and his parents escaped Czechoslovakia after the Soviet Union took over, for example. They were placed in the hold of a ship and a floor was placed/screwed in above them. Can you imagine? The trust you’d need in people who weren’t trustworthy? He told this story on Marc Maron’s podcast in 2014, which I heard recently when Maron rebroadcast it after Reitman’s passing, and I flashed on it here. I also thought of the holds of slave ships. And seasickness. Wouldn’t they get seasick? I thought of my own struggles with that, and how, the best thing to do is keep watching the horizon. They couldn’t do that, of course. They were below, in the dark, packed together. And as the ship was buffeted about, yes, they got seasick; and I’m sure the retching of some led to the retching of others; and the smell of the vomit led to even more vomiting. And this is where the movie began to hit me on a gut level. Is it because it’s where I began to identify? Where I stopped thinking of the characters as “other” and thought of them as “me”?

Water begins to pour into the hold, so the refugees escape, see they're in the midst of a storm, and begin to bail water. Is there a crew at this point? I never got a sense of it. After the waters calm, they’re basically adrift until a huge Norwegian cruise ship is spotted and pulls alongside them. All the refugees cheer. All except Amin, who looks at the well-dressed vacationers, staring and taking pictures, and feels shame and embarrassment. Or maybe he senses what’s to come next? They’re not taken aboard. The cruise ship captain announces that the Estonian border police will be by to pick them up. And they’re returned to Estonia. And from there to Moscow. All that horror for nothing.

The week I saw this film I was also reading and listening to coverage of Putin’s invasion of Ukraine; and in one podcast, talking up all the U.S. companies pulling out of Russia, the guest, an expert in Russian affairs, reminisced about that moment of hope when the first McDonald’s opened in Russia. Well, we get that here, too, but it’s not a moment of hope. A crowd is drawn, including Amin and his older brother, who are distracted enough that they don’t see the cops until it’s too late. Money is demanded. Amin’s watch, a family heirloom, is taken. Then they’re tossed into a police van with a female refugee. She turns out to be their means of escape but not in a good way. The boys are let go so the Russian cops can rape her in private. Amin looks back to see the doors close, and his adult self, on the couch in Copenhagen, berates himself for doing nothing—when, obviously, he could do nothing. Or anything he could’ve done would’ve been a suicide mission. “It’s one of the most horrible feelings I ever had,” he says. You can’t help but wonder what happened to that woman. Amin’s story is horrific but he got out. He got to tell it.

Wheel of fortune
Amin’s refugee journey is occasionally interrupted to show us his current adult life in Copenhagen. He’s an academic, there’s talk of Princeton, he’s got a Danish fiancé named Kasper. They visit a house but something’s missing. I thought Kasper was distant but it’s actually Amin. He’s not quite there.

We also get glimpses of Amin’s budding sexuality throughout, and these tend to be the most humorous aspects of the film—such as when his Kabul-era poster of Jean-Claude Van Damme winks at him. Or when, in Copenhagen, with, I believe, his adoptive mother, he says he wants medicine so he’ll stop liking men. This is when we realize that there’s an element of good fortune to Amin's story, too. He landed in one of the most progressive cities in the world. Just imagine the reaction if he’d been in Alabama or Kansas. Imagine him under the Taliban.

Coming out to his family occurs in Stockholm, as his older older brother talks up the girls in Denmark, how pretty they are, and why doesn’t he have a girlfriend? Amin comes clean: He’s gay. Everyone is quiet. His sisters are shocked. Finally his older older brother takes him in a car to a nondescript part of town, hands him money and tells him to have a good time. There’s a neon rose above the door. We assume it’s a brothel. The animators misdirect us further by showing us a heavily made-up woman inside. But past some curtains we discover it’s a gay disco. And the beefcake bartender, like Jean-Claude, winks at him. And my heart filled.

In 2019, “Honeyland” and “Collective” became the first films to be nominated both Best Documentary andBest International Feature by the Academy Awards. “Flee” did them one better: It’s also nominated for  Best Animated Feature. You figure it’ll win something. No story feels more relevant. Although I guess there are few moments in history when it doesn’t feel relevant.

Tags: Movie Reviews, Danish Films, Documentaries, Animated Movies, Jonas Poher Rasmussen, Afghanistan, Denmark, Russia, Homosexuality in Cinema
Posted at 07:19 AM on Wednesday March 16, 2022 in category Movie Reviews - 2021
« A 'Known For' Quiz   |   Home   |   The World As We Know It Will End Because of Fossil-Fuel Interests, Joe Manchin and the Republican Party »