The hearing daughter of two deaf parents—fisher folk along the coast of Massachusetts—must navigate a crush on a cute boy, music class, and the needs of her family during her senior year of high school. Does the boy like her? (He does.) Is she a good singer? (She is.) Will she get into that prestigious music school? (She will.) Can her parents let her go? (They can.) Thanks for coming. 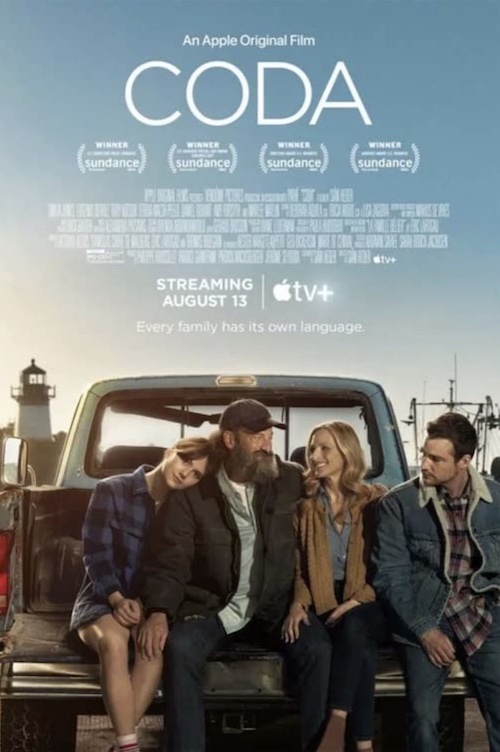 I will say this: Even when I anticipated what would happen, I was moved. Her parents, Frank and Jackie Rossi (Troy Kotsur and Marlee Matlin), don’t know from music, though Dad likes to turn up his gangsta rap full volume to feel the throbbing bass. So they wonder: Is their daughter, Ruby (Emilia Jones), a good singer? How can they tell? I assumed there would be a music pageant of some kind, and they would see the delight on the faces of other audience members, and that would be that. Which is what happens—though writer-director Sian Heder, adapting the 2014 French film “La Famille Belier,” adds a nice touch: halfway through the song, she eliminates the sound. We hear what Frank and Jackie hear, which is nothing. We, too, rely on the faces of others.

Then there’s the moment when Ruby auditions at Berklee College of Music in Boston, singing Joni Mitchell’s “Both Sides Now,” and her parents and her older brother Leo (Daniel Durant) sneak into the balcony to support her. I told my wife, “She should sign the lyrics. That would bring her family into it.” A few seconds later, that’s what she does.

“You were right,” my wife said.

“Not me,” my wife said. She’s made of sterner stuff.

We root for Ruby throughout because she’s cute but not too cute, tough but not too tough, and bears everything with an equanimity most of us didn’t have in high school—if ever. She gets up at 3 AM to fish with her father and brother because they need a hearing person on board, then, smelling of fish, bears the scorn of the mean girls in school. Because she has to act as interpreter between her family and the rest of the world, she’s often the adult in the room, but the movie doubles down on this conceit. Her dad listens to too-loud gangsta rap and her parents have too-loud sex, etc. It’s supposed to be funny and mold-breaking—they’re rebels, damnit—but they often come off as irresponsible and selfish. The movie’s title stands for “Children Of Deaf Adults” but her parents don’t act much like adults. I’m curious if anyone in the deaf community has objected.

The movie’s main conflict—can the family’s fishing business survive without Ruby?—is resolved at the 11th hour, all but off-screen, and the mother, who’d always felt out of place among hearing contemporaries, suddenly gets along with them, and her older brother finds his place, too.

Kotsur has won every prestigious award he can carry—BAFTA, SAG, Oscar—but some part of me wonders if he’s the best supporting actor in this movie. At the least, I was more intrigued by Durant as the brother. He’s got something. A certain cool. Will be interesting to see what else he does.

I also liked seeing Mexican comedian/actor Eugenio Derbez as Bernardo Villalobos, the demanding music instructor who takes Ruby under his wing. Sadly, we lose the thread of that relationship. She keeps showing up late to his private instruction because of family obligations but he thinks she’s a typical spoiled teenager who can’t tell time. Me, watching: “Tell him. Tell him your parents needed someone to interpret during a TV interview for their new fishing collective. Tell him that’s why you’re late.” But she doesn’t. She doesn’t say the obvious true thing. Instead, she offers vague excuses. And oddly, we never see them reconcile. There they are at the high school music pageant. There he is accompanying her on the piano during her Berklee audition. There they are celebrating when she gets in. Thanks for coming.

Record-breaking
According to Nathaniel over at Film Experience, “CODA”’s best picture win set some records:

So I guess the stats didn’t really see best picture, either.