Aliens attack the earth, superheroes beat them back, we’re saved. Then superheroes are blamed for the destruction. Then they fight each other.

That’s the plot for both this movie and “Batman v Superman: Dawn of Justice.” This one is “Citizen Kane” in comparison.

Example: During the Berlin airport fight scene halfway through the movie, Ant-Man (Paul Rudd, a standout in a small role) gets inside Iron Man’s suit and begins to cause damage:

Ant-Man: You’re going to have to take this to the shop.
Iron Man (startled): Who’s speaking?
Ant-Man: Your conscience. We don’t talk a lot these days.

At another point, Ant-Man morphs into Goliath, freaking out the other superheroes, and leading Iron Man to tell his team: “OK, anybody on our side hiding any shocking or fantastic abilities they’d like to disclose?” 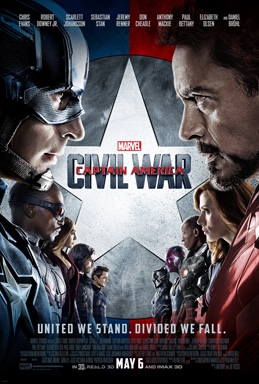 Or this: To defeat Goliath, Spider-Man (introducing: Tom Holland) wraps his webbing around his legs to topple him. It’s a rip-off of Luke Skywalker toppling the Imperial Walkers in “The Empire Strikes Back.” What’s cool is he acknowledges it. He references it. And it’s the way he references it: “Hey guys, you ever see that really old movie, ‘Empire Strikes Back’?” Leading Rhodey (Don Cheadle) to ask, “Jesus, Tony, how old is this kid?”

You in
“Captain America: Civil War” is based upon the landmark 2006 comic series by Mark Millar and Steve McNiven, in which, post-9/11, superheroes were forced to register with, and reveal their identities to, the federal government. Tony Stark said yes, Cap said no. Battle lines.

Since secret identities aren’t much of a thing in the Marvel movie universe (“I’m Iron Man,” etc.), they needed a new issue. But the replacement doesn’t quite resonate. The issue has issues.

In the aftermath of Avengers battles in New York (“The Avengers”), Sokovia (“Avengers/Ultron”), and Lagos (here), U.S. Secretary of State Thaddeus Ross (William Hurt), informs our heroes that 117 countries have signed an agreement putting the team under the control of the United Nations. Essentially the Avengers can only assemble when it gets agreement from the U.N. Security Council.

Before, the Avengers assembled at the behest of S.H.I.E.L.D. and Cap never objected. Here, Cap says it’s a matter of choice, which he didn’t really have before, and which is an odd thing for a soldier to want anyway.

Meanwhile, Tony Stark, the former weapons manufacturer, who is berated by a woman (Alfre Woodard) who lost her son in Sokovia, is compliant. He’s all in. Downey does a not-bad job of selling the U.N. resolution, but he’s got the inferior product.

Then it gets personal. A U.N. conference in Vienna is blown up, the father of the Black Panther (introducing: Chadwick Boseman) is killed, and Cap’s friend, the brooding Winter Soldier, the former Bucky Barnes (Sebastian Shaw), is fingered. Cap discovers that the Winter Soldier was framed but Iron Man won’t listen. So we get the big Berlin airport battle. Essentially:

Then it gets more personal. Rhodey, War Machine, is a victim of friendly fire from the Vision and may be paralyzed for life.

Then it gets less personal: Iron Man realizes Cap was right and the Winter Soldier was framed for the Vienna bombing.

Then it gets the most personal: Iron Man discovers the Winter Soldier, as a brainwashed Soviet spy in 1991, killed his parents in order to get five samples of the supersoldier formula.

So now Winter Soldier has two superheroes trying to kill him. And Cap keeps defending him. Which is a bit tiresome. I liked it better in the ’60s and ’70s when Bucky was just dead.

A machination too far
He’s Zemo (Daniel Brühl), formerly Baron, who lost his family in Sokovia when the Avengers saved the world. Now he wants revenge. Here’s how he goes about getting it:

But ... weren’t they already doing that? Without his help? And didn’t his final move—showing Tony Stark evidence that the Winter Soldier killed his parents—depend upon Iron Man actually showing up in Siberia? That’s a fantastic coincidence to begin with. It depends upon Tony: 1) listening to the frame-up argument from Natasha (Scarlett Johannson), 2) finding evidence that confirmed this, 3) flying to Siberia at just the right moment.

How great if it had just been Cap and WS in Siberia. Zemo makes his big reveal, looks around: “Wait, where’s Iron Man? Seriously, this thing really depends upon Iron Man being here.”

Too much heavy lifting, Zemo. Just show Tony that footage in Vienna. Siberia shouldn’t enter into it.

Make Mine Marvel
I admit I’m a little tired of superhero movies. We’ve had 13 of these things since “Iron Man” in 2008—and that’s just the Marvel Cinematic Universe. Doesn’t include X-Men (Fox), Spider-Man (Sony), Batman/Superman/Green Lantern (Warner Bros.). Poor Chris Evans has been Captain America every summer but one since 2011.

But if you’re going to have them, this is the way. Just look at the great scene where Ant-Man meets Captain America. How fun is that? That’s what you want: wit, personality, continuity. Don’t be like Zack: be smart.

But a little smarter would be nice, Marvel.