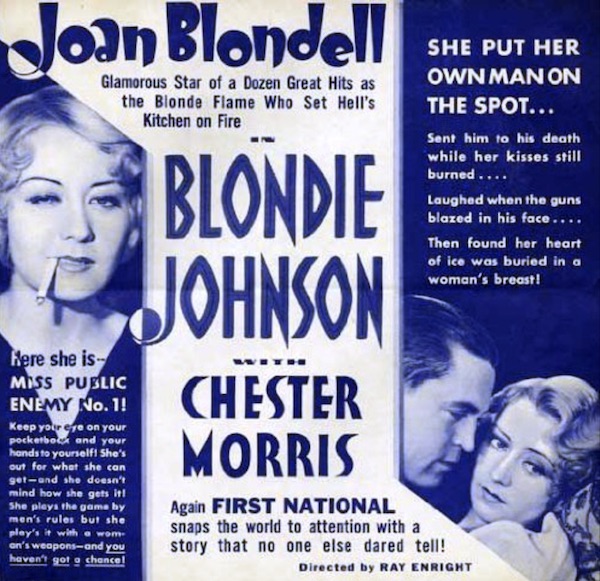 In the early ’30s Edward G. Robinson played gangsters who were Italian, (“Little Caesar”), Greek (“Smart Money”) and Chinese (“Hatchet Man”), and if he’d been believable as a woman they probably would’ve given him this role, too. Thankfully it went to Joan Blondell.

It’s a traditional ’30s Warner Bros. story but interesting for its gender reversal. Our title character rises on the wrong side of the law only because the right side ain’t right. In the midst of the Great Depression, Blondie is trying to get welfare for herself and her sick mom but the welfare man sticks to the rules. She’d quit her last job at a laundry because the boss wouldn’t let her alone but the welfare man only hears quit. “That's all for now, Miss Johnson,” he declares coldly. Then Blondie returns home to find her mother dead. So she declares the following to the world:

“This city’s going to pay me a living—a good living—and it’s going to get back from me just as little as I have to give!”

It’s a bit like Scarlett’s “As God is my witness” declaration six years before Scarlett, isn’t it? Just not in Technicolor. And at the beginning of a Warners quickie rather than halfway through a Selznick epic.

Hattie’s brother
Her first con is a damsel-in-distress thing that works well but also ensnares a low-level gangster, Danny Jones (Chester Morris). Unabashed, she uses her smarts to rise with him. She figures out the power struggle within the gang, sides with Danny and Louie (Allen Jenkins) over Max (Arthur Vinton), and outsmarts them all. Now it’s Danny’s gang. But he’s interested in Blondie romantically—or sexually—and she wants to focus on business. So he opts to get hitched with Gladyss (Claire Dodd), whom Blondie had dismissed as “the dame with the platinum chassis.” But Blondie outsmarts him again, and takes over the gang, along with her female friends Mae (Mae Busch) and Lulu (Toshia Mori). The 1930s had tons of “smart chick” flicks—more than today, really—but the three of them hanging and plotting in the big office still feels revolutionary.

Unfortunately, the movie makes her have a thing for Danny, and unfortunately there has to be comeuppance for her lawless ways. So she’s sentenced to six years hard labor. Outside the courtroom, she and Danny meet—he’s about to get sentenced himself—and they promise to wait for each other. Yay.

Blondell is by far the best thing in the movie. Morris isn’t much and the usually reliable Allen Jenkins exudes little. Dodd is good as the smirking minx who will try to steal your man—she could do it in her sleep—while Sterling Holloway has a nice turn as Red Charley, a cabbie who haplessly helps her with her first scam and her last ride. Her girls aren’t given much to do. There’s also a short scene with a moon-faced Pullman porter who looked familiar to me. Turns out he’s Sam McDaniel, who played a waiter in “The Public Enemy” with James Cagney. That’s why he was familiar. On IMDb he also has 221 credits to his name, including 60+ where he’s a Pullman porter. He was born in 1888, kept working until 1960, died in 1962. He was also Hattie McDaniel’s brother. There’s a story there, but his IMDb bio is skimpy. Wiki is better but not by much. He had no obit in The New York Times.

Blondes, blondes, blondes
Ray Enright directed “Blondie Johnson,” with story and screenplay by Earl Baldwin (“Devil Dogs of the Air”). He pens some not-bad put-downs, and Blondell makes the most of them:

Danny: If you was my dame I’d break your neck.
Blondie: If I was your dame I’d deserve it.

Danny: What are you trying to do? Put ideas in my head?
Blondie: There's certainly plenty of room for ’em.