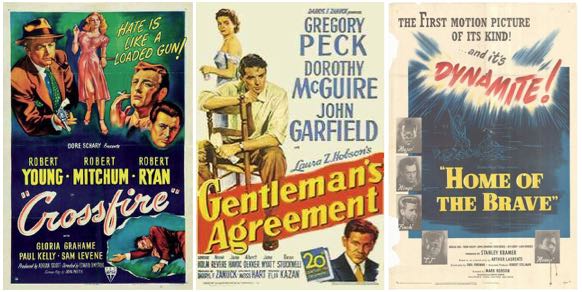 Homophobia, exit through the gift shop.

I'm reading the Hollywood/Broadway memoir “Original Story By Arthur Laurents” right now, to calm myself between maddening excursions into Jane Mayer's expose of the Koch brothers (a.ka. why you no longer live in a democracy), and came across this interesting Hollywood “message movie” shell game.

Laurents' first theatrical play, “Home of the Brave,” was made into a movie in 1949. The play was about anti-Semitism but Hollywood made it about racism: a black soldier rather than a Jewish soldier was attacked. Why the switch? Because both “Gentleman's Agreement” and “Crossfire” had been released in 1947, so it was felt that anti-Semitism “had been done.”

Interestingly, “Crossfire” had originally been about homophobia but of course that wasn't commercial in 1947. So...

No surprise, I'm sure, to Laurents, who is both gay and Jewish, and who had written the following earlier in the memoir, which was published in 2000:

I believed most Americans were prejudiced against homosexuals, Negroes and Jews, in that order. I still do. It's somewhat less overt now because it's somewhat less sanctioned, but bigotry is still alive and killing in the U.S.A.

And here's his take on the switch, not to mention “Gentleman's Agreement”:

In the screen adaptation produced by Stanley Kramer, the Jew was changed to a Negro. When I asked why, Stanley replied: “Jews have been done.” He was referring to the movie Gentleman's Agreement, in which Gregory Peck played a gentile (no stretch) pretending to be a Jew (only in the movies). The picture's moral was Be nice to a Jew because he might turn out to be a gentile. The film version of Home of the Brave was highly acclaimed and was a commercial hit. Not a critic, not a vocal soul was bothered that there were no racially integrated units in the Army like the one in the picture. It was a movie.

It's a good memoir. So far a swirl of wit and drink and sex in New York in the 1940s. Haven't gotten to the blacklist yet.