“Inception” was the no. 1 movie for the second week in a row, grossing an estimated $43.5 million. The initial interest in Christopher Nolan's dream thriller is apparently carrying over into either repeat viewings (to doublecheck one's own theories, or the theories of others) or new viewers (because they heard).

Its second weekend drop is, in fact, the lowest drop of the year for any no. 1 movie not named “Avatar”: 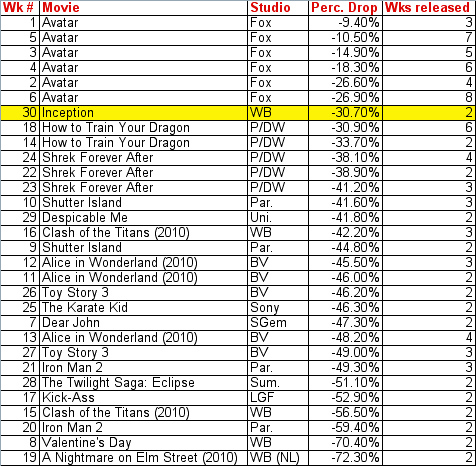 Either way, it's a triumph for originality and creativity in the heat of summer. Now watch studio execs attempt to duplicate that originality.

Of the new films, Angelina Jolie's “Salt” finished close to “Inception” with $36 million, while Fox's “Ramona and Beezus,” which I've barely heard about, finished no. 6: $8 million in 2,719 theaters. Not good.