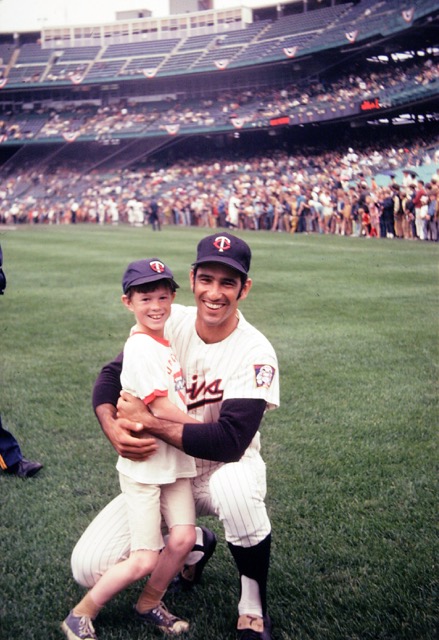 Frank Quilici and my brother Chris on Camera Day, 1970.

When I was a kid, and time went slowly, second baseman Frank Quilici seemed a mainstay on the Minnesota Twins. If you'd asked me last week how long he'd played for them, I would‘ve guessed seven years. Something like ’67 to ‘73. Maybe longer.

Nope. He was a semi-regular for only three seasons: ’68-‘70. His last game was the third game of the 1970 ALCS—a few months after the above photo was taken. The Orioles, who had swept the Twins in the ALCS the previous year, were already up two games to none, and were beating my boys soundly 5-1 in the top of the sixth when Rich Reese drew a two-out walk against starter Jim Palmer. Twins manager Bill Rigney, hoping to get something going, subbed in former star Bob Allison for light-hitting second baseman Danny Thompson. Allison popped to short. Now Rigney needed a new second baseman, so Quilici came in. (Why not Rod Carew? He had been injured halfway through the ’70 season and was used only twice in the ALCS—both times as a pinch-hitter.) Later, when it was Quilici's turn at bat, in the top of the ninth with one out and Rich Reese again on first, Rigney brought in Danny Alyea as a pinch-hitter. He struck out. Then another pinch-hitter, Rick Renick, grounded out and there went the season.

That was Quilici's last appearance as a player on a Major League field: as a defensive sub who was subbed for a pinch-hitter.

I also assumed Quilici was fairly solid but his career numbers are as follows: .214/.281/.287 hitter. That's why he only lasted parts of three seasons. But I have fond memories. The above photo was taken on Camera Day, 1970, at Met Stadium in Bloomington, Minnesota. The kid with him is my older brother, Chris, who was wearing a Camp Kichi Yapi t-shirt. Apparently Quilici's son went there? That's in my head anyway. They spoke, and it led to this great photo.

Two years later, in the summer of ‘72, I was at a different camp, Cathedral of the Pines, when I heard Quilici was replacing Bill Rigney as the Twins manager. That made me happy. Rigney was grumpy-looking and at the helm when the Twins began their downhill slide, so I blamed him. I thought Quilici would turn things around. He didn’t. In 3+ years, the Twins went 280-287 under his leadership. That's actually not bad, considering the core of our team was dropping like flies: Killebrew old, Tony-O injured, Tovar traded. Only Rodney Cline kept coming through.

After Quilici was replaced by Gene Mauch, he became a broadcaster for a time. Here's his obit in the Star-Tribune. Strib sportswriter Patrick Reusse has a good remembrance, too.