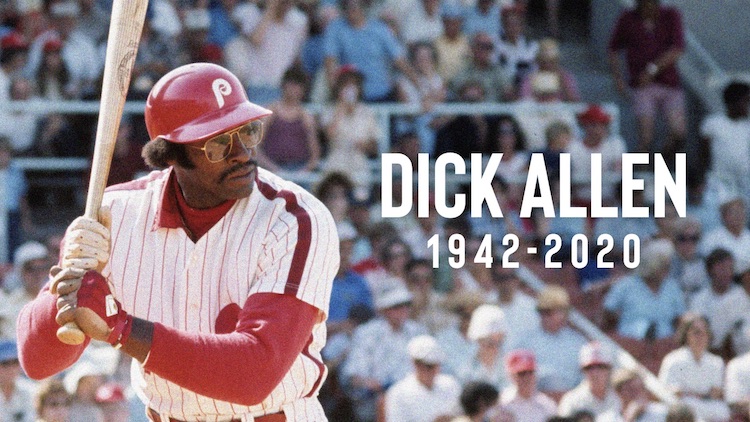 He was the badass of baseball when I was a kid. He held the title before Reggie, who held it for a while. I believe he was also the the highest-paid player for a time. Baseball Ref has him at $200-$250k in 1973, which seems about right for highest-paid back then. I vaguely remember my 4th grade math teacher breaking down his salary to a per-game payout, and eventually to a per-second on the field payout. How much did Dick Allen make every second he was on a baseball diamond? This. It was a math lesson but it was also a vague ethics lesson. As in, “Who could be worth so much money?” Even then, though, the ethics felt shoddy to me. We didn't do this with others, just with this man playing a boy's game. A Black man. A Loud Black man. Made me feel uneasy, though I could not articulate why.

If he was highest paid he was worth it. Look at that '72 season with the ChiSox. Led the league in HRs, RBIs, walks, slugging percentage. Led the Majors in OBP and OPS and OPS+. Nearly won the triple crown. His .308 batting average was 10 points behind Rod Carew, with Lou Piniella at .311 between them. But he wasn't a unanimous MVP. Three votes shy. One writer went with Joe Rudi of the division-winning (and eventual World Series-winning) Oakland A's as his No. 1 pick. I assume the guy thought, “Well, Rudi's team won, his batting average is close to Allen's, Rudi's the better fielder.” But that misses so much. Two other sportswriters chose pitchers, and neither was the pitcher that won the Cy Young that year—Gaylord Perry. I suppose Mickey Lolich wasn't a bad choice but he led the league in just one category: homeruns allowed. The other sportswriter went with the Yankees' Sparky Lyle, who had a good season, led the league in saves, but he was still a relief pitcher. Lyle didn't even get any first-place votes for Cy Young. He finished third for MVP and seventh for Cy. Odd.

Allen was the 1964 Rookie of the Year, the NL counterpart to my man Tony Oliva. That's a helluva rookie class, though neither man is in the Hall. Allen's advanced-numbers Hall of Fame case is about as on-the-cusp as you can get. His bWAR is a bit low (58.8 vs. 68.4 for an average HOFer) but everything else is right there. Black ink? Meaning times leading the league? Average HOFer is 27; he's 27. Gray ink, which includes top 10 appearances? Average: 144. Allen: 159. HOF Monitor? Likely HOFer: 100. Allen: 99.

I get the feeling he didn't get in before not only because they didn't break down the numbers this way, and not only because his career counting numbers weren't eye-popping (351 HRs, 1,848 hits), but because of who he was. The Loudmouth. The guy who wrote things in the dirt with his bat. I get the feeling that all of that will actually help his case now—as will his career batting line: .292/.378/.534. How many guys with a .900+ OPS over 15 seasons aren't in the Hall? Hell, maybe he should get in just for that Sports Illustrated cover. This is the badass I was talking about.

If you want more on Dick Allen's story, his turbulent career, the abuse he endured, and the horrible history of the Philadelphia Phillies when it came to integrating the game, Joe Posnanski is your man.