Captain America: From Hitler Puncher to Commie Smasher to Man Without a Country

If you'd asked me in 1974, when I was 11 years old and a year into my serious Marvel-Comics-collecting phase, for the names of my two favorite superheroes, I would've immediately given you Spider-Man; then after some thought, after mentally sorting through Superman and Batman (the only DC heroes worth a damn), and the Hulk, the Thing, Iron Fist and Luke Cage, I would've added, “Captain America.”

Spider-Man is easy to figure. A teenager who feels sorry for himself but has the proportional strength of a spider. Identification and wish-fulfillment in the same package.

Wish fulfillment, sure, but why did I identify? 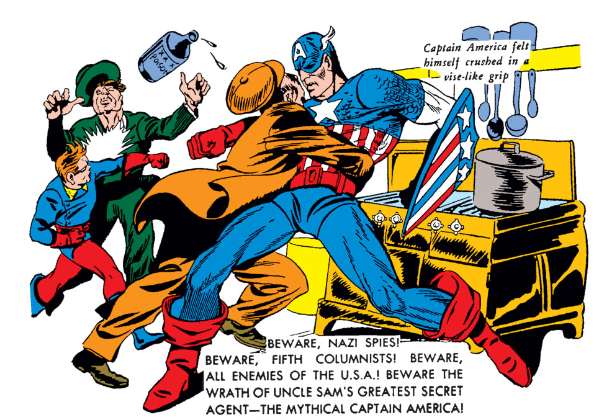 Captain America was created by Joe Simon and Jack Kirby in March 1941, for what was then Timely Comics, and on the cover of the first issue he's seen decking Adolph Hitler—meaning Captain America was fighting the Nazis eight months before America was fighting the Nazis. He was soon joined not only by the rest of us but by many superpatriotic superheroes: The American Eagle, The American Crusader, Minute-Man: the One-Man Army, Major Victory, Man of War, Uncle Sam, U.S. Jones, The Shield, The Defender, The Flag, Super-American, and V-Man, as well as a character named Yankee Doodle Jones, an artificial man, who, in one of the more gruesome origins ever, was created from the body parts of crippled World War I veterans. Then he was injected with a super serum.

This last bit was Captain America's origin, too: scrawny kid, tries to enlist, 4-F, but volunteers to be injected with a super serum from a Professor “Reinstein.” The kid is to be the first of a super army. But the Gestapo shoots Reinstein, his formula dies with him, and we're left with Steve Rogers and the legend of Captain America.

Scan the covers of those early, World War II-era comics and they are, albeit with greater Kirbyesque attention to the energetic motion of the human body, typical of the period: carryovers from the lurid pulps, with damsels or young boys (Bucky Barnes) tied up and imperiled, and our hero decking yet another round of sinister Krauts or buck-toothed Japs or various yellow or green grisly monsters and henchmen. My favorite imperilment may be on the cover of Captain America #9, in which a Mephisto-like creature is painting himself in the act of strangling Bucky Barnes. Jack Kirby's wish fulfillment?

Most of the superpatriots either didn't survive or barely survived the war, and Cap was no exception. Captain America #42 was the first issue where Cap is fighting civilians on the cover—bank robbers rather than Nazi or Jap soldiers—and several issues on you can sense the desperation. Cap's dynamic silent covers suddenly became very wordy. A Clark Kent-like private life for Steve Rogers was created. Women went from being imperiled to being the peril. For a time, as horror comics took over the medium, the magazine was retitled “Captain America's WEIRD TALES.” At the height of McCarthyism, the magazine was retitled “Captain America COMMIE SMASHER!” None of it worked. Captain America #78 was the last issue. 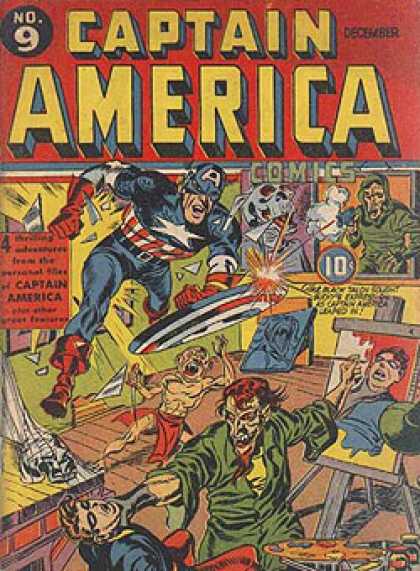 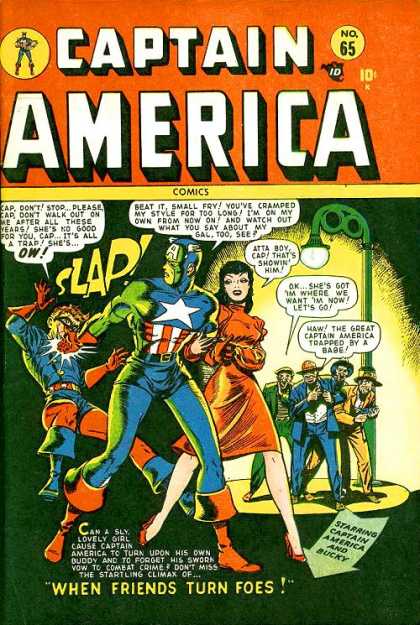 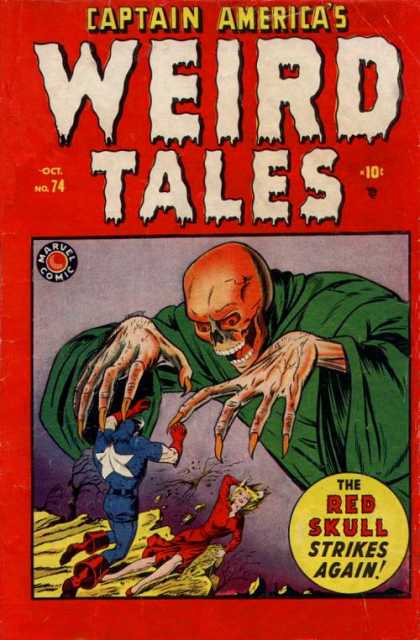 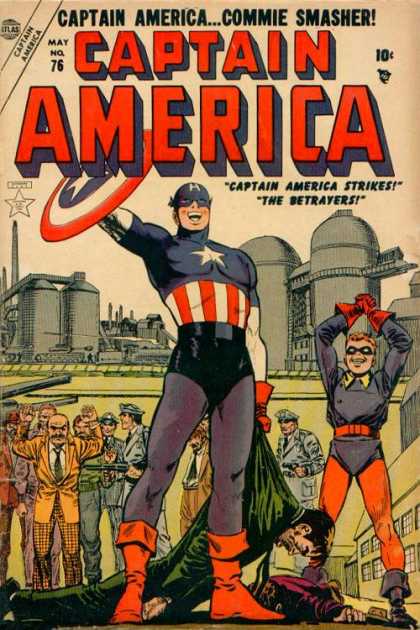 In 1974, I knew none of this history. I merely knew the story Stan Lee created in resurrecting Cap in Avengers #4: How, at the end of the war, as he's fighting Baron Zemo with Bucky, the two climb aboard a missile in flight to redirect it. But Bucky stays on too long and gets blown up, while Cap, screaming “Nooooooo!,” falls in the ocean, is encased in ice, and is thus preserved, World War II-era ready, when the Avengers find him in 1963.

In a way Cap never gets over losing Bucky. He never gets over his lost 19 years. He remains, in the Marvel comics parlance of the time, trapped in a world he never made!

That was part of the appeal for me. In 1974 my parents were already separated and in the midst of a divorce, and I felt trapped in a world I never made. I felt I had lost something, as Cap had lost Bucky, as Spider-Man had lost his Uncle Ben, and I identified with their respective losses.

The storylines in Captain America were also fascinating. I began collecting Cap with #169, which was the first issue of an six-issue arc in which Cap battles a group called “The Secret Empire,” who first besmirch Cap's name via television propaganda (anticipating FOX-News by 25 years), then frame him for murder. But Cap and the Falcon (now with wings!) infiltrate the organization and stop it literally on the White House lawn. 1974 was a very political year and Marvel, to its credit, didn't run from it. They embraced it. Inside the White House, Cap unmasks the Empire ringleader, a man with “high political office,” whose power was “still too constrained by legalities,” who subsequently kills himself. An issue later, in the exact month Nixon resigned the presidency, Steve Rogers, fed up with what his country had become, resigns being Captain America. A few issues later, with the help of Hawkeye, Steve Rogers becomes Nomad, man without a country. That arc lasted for about a year.

My favorite Captain America storyline, though, was one I discovered via back issues at Schinders, a magazine store on 7th and Hennepin in the then-grungy part of downtown Minneapolis. Captain America #s 154-156 would now be called a ret-con storyline: “retroactive continuity.”

Fans, you see, delving into the history, had begun to wonder how Captain America could have been frozen in a block of ice during the 1950s when there were in fact real issues, “Commie Smasher” issues, being created in our world. This was Marvel's solution. Scripter Steve Engelhart and artist Sal Buscema created a second Captain America and Bucky, both injected with the super serum, who became America's McCarthy-era heroes. The original serum, though, included “vita-rays,” which weakened, slightly, the serum but preserved the subject's sanity. McCarthy-era Cap wasn't so lucky, and, like the worst part of his country during that decade, he became an intolerant, racist superpatriot, a commie smasher who, after Nixon opened China in '72, is resurrected by another commie-hater within the State Department. 1950s-era Cap then goes after 1970s-era Cap, whom he doesn't know is the original until it's too late.

Our Cap, the sensitive 1970s Cap, beats the fascistic 1950s Cap in a battle in Miami. But check out the last panels (taken from the original comic book). He wins but he sees himself in the loser. The victory doesn't make him feel good: 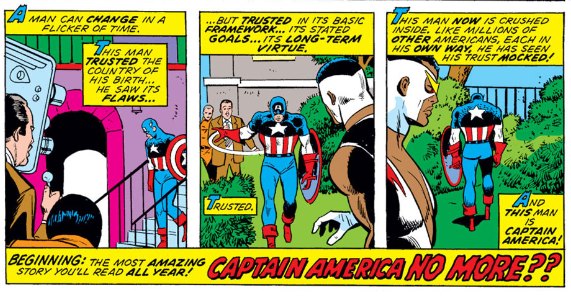 Admittedly Captain America is a cool superhero. He's got a cool name. He's got a shield that, like a bullet-proof frisbee, always returns to him. He rides a motorcycle. Plus he's a tortured soul in the Mighty Marvel Manner. He's suffered a great loss. He has an original sin. He's stuck in a world he never made.

In his post-1963 incarncation, he's also never been a superpatriot. The opposite. He has nothing but doubts about his country. Representing America, he is forced to question it all the more.

But I think the above panels demonstrate Captain America's real appeal to my 11-year-old self. After his incredible victories, against incredible odds, using his incredible muscles, he resembles no one so much as me dragging myself back to my room to mope.