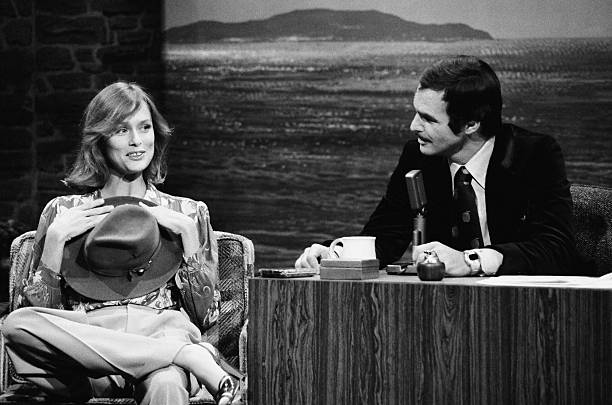 Reynolds hosting “The Tonight Show” in 1976, with his guest, “Gator” co-star Lauren Hutton.á

Here's a not-bad trivia question: The year “Star Wars” was released and remade the movies as we know them, what was the No. 2 box-office hit of the year?

According to Box Office Mojo, “Smokey and the Bandit,” which grossed the equivalent of $526 million during its summer run. Yep, that much. Adjusted for inflation, it's the 75th biggest movie of all time, just behind “Superman: The Movie,” and just ahead of “Finding Dory” and “West Side Story.” That's how big Burt Reynolds was.

According to Quigley Publishing, Reynolds was a top 10 box-office star every year between 1973 and 1984, and was No. 1 for five years straight: 1978-82. (Since then, no one has topped that chart for more than two years in a row.) He was on talk shows all the time. He was so goodùfunny and self-deprecatingùhe was a regular guest host for Johnny Carson. He was sexy. Women loved him and men wanted to be himùor at least hang with him. He was the first movie star I knew who wore a toupee and probably the last white movie star who regularly wore a mustache.

He was also the first big movie star I saw fall from grace. He went from being ubiquitous to being nowhere. To my young self, it felt like an object lessonùLouis XVI for the celebrity age.

In 1973, after breaking through with “Deliverance” and the Cosmo centerfold (which he came to regret, since he felt it kept him away from more serious roles), he alternated between good ol' boy car-chase movies (“White Lightning,” “Gator,” “W.W. and the Dixie Dancekings”) and attempts at respectability (co-starring with Gene Hackman and Catherine Deneuve). He starred in Peter Bogdanovich's 1975 bomb “At Long Last Love,” with Ryan O‘Neal, and the next year, lesson unlearned, they all made the inside-Hollywood period piece, “Nickelodeon.” It bombed, too.

Then Reynolds did “Smokey and the Bandit.” What made it break out the way it did? How did he get people like me to see it? I think I saw it three times in the theater. (It’s the only Burt Reynolds-starring movie I ever saw in the theater.) Was it the whole C.B. radio fad? Maybe his romance with Sally Field? Jackie Gleason chewing scenery as Sheriff Buford T. Justice? I loved Jerry Reed as the good ol' boy sidekick with his basset hound Fred and his great soundtrack song, “East Bound and Down”? The movie had endless car chases and an Evel Knievel-esque jump over the swamp. It had Reynolds breaking the fourth wallùsmiling at the camera as Superman would a year later. It was just fun.á

But Reynolds still kept trying for respectability. He shaved the ‘stache and played sensitive in Alan J. Pakula’s divorce rom-com “Starting Over.” He was in the Broadway hit, “The Best Little Whorehouse in Texas” with Dolly. He played off his imageùBurt Reynolds wants to have your baby in “Paternity”ùand played off of Hollywood top leading ladies: Field, Jill Clayburgh, Goldie Hawn. After that, he'd go and do another Hal Needham-directed car chase flick.

It all worked until it didn‘t.

** all top 20 films highlighted in yellow

Joe Posnanski has written about the end for athletesùhow they seem to be doing OK and then the bottom falls out. This was that for a movie star.áHe had top 10 hits every year until 1983, then never again. Even teaming with Clint Eastwood in “City Heat” in 1984 didn't take. He was never my guy but it was weird coming back from Taiwan in the late 1980s and seeing him on TV, or seeing his films in the straight-to-video bin of the nearest Blockbuster. Where did his fan base go? I guess inside, to watch “Evening Shade.”á