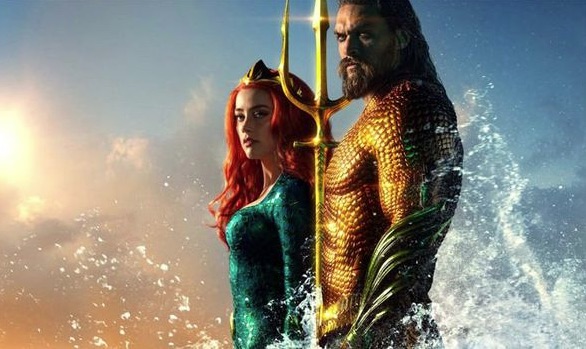 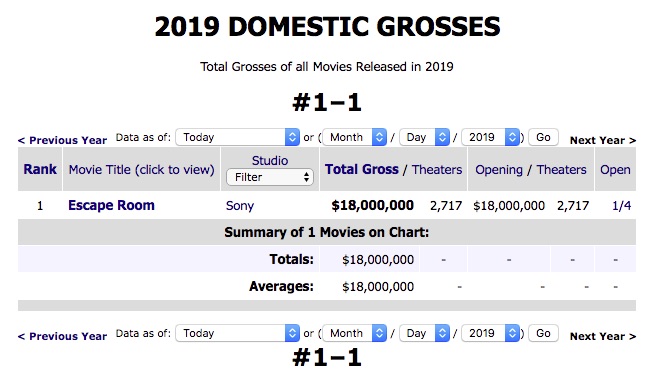 It's a seasonal tradition, like Christmas and bad Mariners trades. For some reason, one horror flick (always just one) is released during the first weekend of the year, so for a week, and sometimes longer, it's the No. 1 movie of the year. “Escape Room” did so-so biz in this regard. A year ago, “Insidious: The Last Key” grossed $29. In 2012, “The Devil Inside” grossed $33. $18 is about average. The one thing these horror flicks have in common is they‘re all forgettable.

“Escape” is first for the year but finished second for the weekend—to the third weekend of “Aquaman,” which added another $30 million to bring its domestic total to $259.7. In the DC Extended Universe, it’s ranked fifth of six, beating only “Justice League.” Domestically, that is. Worldwide it's already No. 1, having grossed $681 overseas for a worldwide total of $970. It's the fifth biggest movie of the year, surpassed only by “Avengers,” “Black Panther,” “Jurassic” and “Incredibles.”

What's not faring well? “Holmes and Watson” at just $29 after two weeks. Odd release date. The weekend after Christmas? At that point, everyone is itching to see the movies that were released before Christmas but everyone was too busy to see. J-Lo's “Second Act,” originally pitched as a you-go-girl job movie, and repackaged at the 11th hour as a rom-com, never had much of a first act: It's grossed $33 after three weekends. And “Welcome to Marwen,” which looked supersappyawful, and whose fucking trailers I had to endure for like six months, wasn't particularly welcome: It's at $10 mil after three weekends.

The movie with the longest legs? “Bohemian Rhapsody,” which, in its 10th weekend, pulled in another $2.4 million for 11th place. It's now at $193 domestic and—get this—$550 internationally, for a worldwide total of $743 million. Holy crap, I had no idea. It's now the 99th highest-grossing film of all time, worldwide and unadjusted, and eighth among 2018 releases. The only movies above it are superhero flicks and action-adventures.