Domestically and unadjusted, that's the 18th-biggest opening ever, and seventh biggest of the MCU—after the three “Avengers” movies, “Black Panther,” “Iron Man 3” and “Captain America: Civil War” (which is really an Avengers movie). Worldwide, that's the sixth-largest debut ever, and second-biggest of the MCU—after “Infinity War,” which is the all-time record-holder at $640 million. 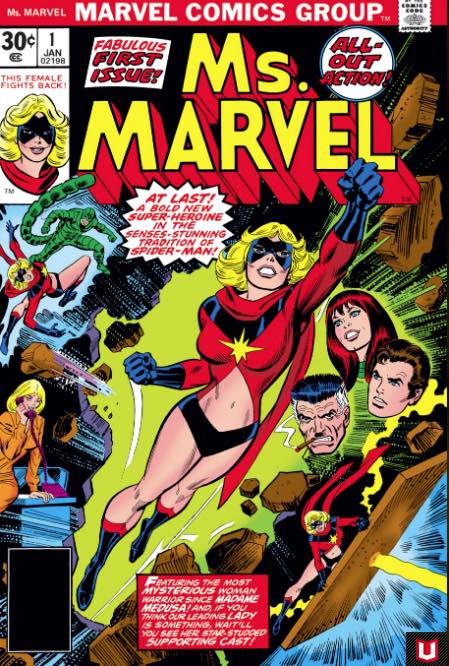 The big question is what kind of legs it will have. I have yet to see the movie, a kind of prequel set in the 1980s/90s, but friends who have mostly shrug when I ask how it is. They say it's OK. It's got an 80% on Rotten Tomatoes but also an audience score of 58%. For the latter number, one wonders how many misogynistic trolls are involved; for the former, how many thumbs ups are accompanied by hapless shrugs.

Me, I'm old enough to remember when Capt. Marvel meant either Shazam! or the blonde-haired astral figure who shared Neutral Zone time with Rick Jones. I also remember the 1977 debut of Ms. Marvel, with her bare legs and midriff and mid-70s coif. I'm pretty sure I bought the issue. I remembering thinking the promise of the cover—“in the senses-stunning tradition of Spider-Man!”—sounded a bit odd. Senses-stunning? Would you want that? How could you even read the comic?

I also don't remember being too impressed with the storyline, or something, but by then I had one foot out the comic-collecting door. Others seemed to feel the same. Ms. Marvel only lasted 23 issues.

That was 40 years ago. One wonders what failed enterprise aimed at kids/teens today will become a billion-dollar blockbuster in 40 years.