This showed up in my in-box the other day: 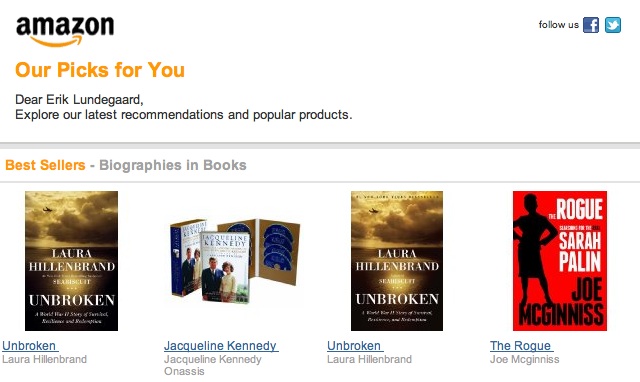 Don't quite get the repetition of “Unbroken” but at least it's correct. And late to the game. I read it earlier this year and recommend it. The others either don't appeal (audio Jackie Kennedy) or only appeal if I want to keep up with the conversations on Andrew Sullivan's blog (“The Rogue”).

But at least Amazon's first row of suggetions made more sense than its second row of suggestions:

“Harry Potter” I haven't seen. “Captain America” made my top 10 for the first eight months of the year (at no. 10). “Fast Five” I dismissed in April. And “Transformers”? I think of that franchise as so stupid and noisy as to be part of the general decline and fall of western civilization.

Someone, in other words, needs to work on their algorithms. Or mine.

When I interviewed Jeff Bezos in October 1996, a lifetime ago, he talked about the things Amazon was working on:

Bezos: We want to set the store up so we can redecorate the store for each individual who walks in...

Me: What do you mean?

Bezos: The whole page would be personally designed for you. So if you said, “I really love literary fiction,” well, here’s a great science-ficton novel that we actually think you'd like based on your preferences in literary fiction. Stuff like that. In case you want to broaden out.

It would all be done automatically. It would have to be. The way it might work is you might come in and we present you with a list of 100 books that are in a particular genre, like literary fiction, let’s say, and you would rate the ones you liked the most and disliked the most, and based on what you liked and disliked the computer would be able to form a profile of your particular tastes, and it might try to match you up with people of similar tastes. You call that your affinity group. What are things you haven’t read that people in your affinity group love? And then it would recommend those things to you.

Still a few bugs in the system.