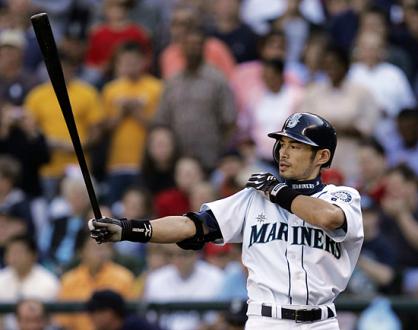 An icon, with an iconic gesture.

This is the first thing I ever wrote about Ichiro Suzuki. It was in the April 2001 issue of The Grand Salami, an alternative Mariners fan magazine, for which I was in charge of player profiles:

Hey, when did we pick up this guy? Just kidding. Ichiro comes to the M's with quite a bit of fanfare, and a playing record whose numerological significance seems something out of folklore: He won 7 straight batting titles with the Orix Blue Wave, 7 straight Gold Gloves, and was named to 7 straight “Best Nine” All-Star teams. And he's only 27. He has a .353 lifetime batting average and Michael Jordan stature in Japan. Yet he's given it all up to try to become the first Japanese position player to make it big in the bigs. Can he do it? That's the question. The U.S. players he's been compared to keeps leveling off: from Johnny Damon (hitting plus power) to Rod Carew (hitting with no power) to Brett Butler (hitting, but not Rod Carew-type hitting). How does .353 translate into English? We hope well.

This is the second thing I wrote about Ichiro Suzuki. It was in the May 2001 issue of The Grand Salami:

Well, that didn't take long. In his first game he looked a little overmatched against Oakland's Tim Hudson—and admitted as much in a post-game interview—but that didn't stop him from dropping a key bunt-hit to help win the game. Four days later against Texas (and You-Know-Who), Ichiro went deep in the 10th inning for the game-winner. The following week against Oakland, he made a throw from right field (now capitalized: The Throw) which defied physics, nailing Terrence Long at third. A week later he robbed Raffy Palmeiro of a homerun at Safeco. What's next? Lightning shooting from his fingertips? Ridding the universe of evil-doers—or at least Scott Boras? And we haven't even mentioned the way he slaps that sweet single between third and short, his speed on the basepaths, and his quiet efficiency in an age of blowhard swagger. To paraphrase an old ad slogan: You Gotta Love This Guy.

On Sunday, the guy we were wondering about in March 2001 and were so amazed by in April 2001, became just the 30th player in Major League Baseball history to join the 3,000-hit club. He did it with a triple—only the second guy to ever do that.

My favorite stat comes via BaseballReference.com, and needs no embellishment from me: 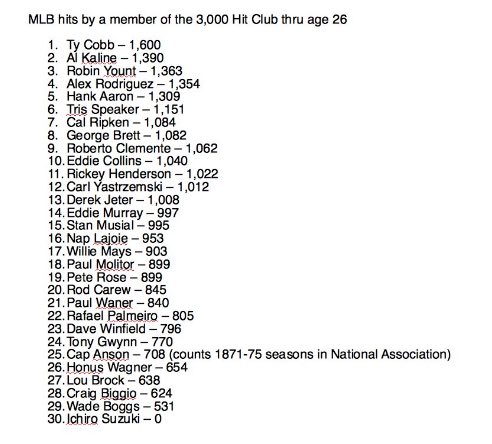