Quote of the Day posts

“The invaders may be full of contempt for a system that they think doesn't represent them, but on Wednesday they managed to prove that it does. The system, which shrugged off their violence like it had been a toddler's tantrum, represents them. It's the rest of us it's failing to protect.”

-- Masha Gessen, “The Capitol Invaders Enjoyed the Privilege of Not Being Taken Seriously,” The New Yorker. Great piece. Why was the Capitol Hill Police unprepared? Gessen thinks it's because they didn't take the protesters seriously. They weren't afraid of them. Because what are we afraid of? The other. “Black Lives Matter protesters are other to the Capitol Police,” Gessen writes. “So are survivors of sexual assault or women who protest for the right to choose. But an armed mob storming the Capitol, and their Instigator-in-Chief, are, apparently, familiar enough to be dismissed as clowns.”

“Every one of the almost 60 Trump challenges to the election has been rebuffed in state and federal courts, including the Supreme Court, involving more than 90 judges, nominated by presidents of both parties. But for scores of millions of mesmerized Trump Republicans, who think the absence of evidence is the most sinister evidence, this proves that the courts, too, are tentacles of the 'deep state.' Hawley and Cruz, both of whom clerked for chief justices of the Supreme Court, hope to be wafted into the White House by gusts of such paranoia.”

-- George Will, “Hawley, Cruz and their Senate cohort are the Constitution's most dangerous domestic enemies,” The Washington Post

After accusing Biden of being on drugs and Bloomberg of bribery, calling for the impeachment of a senator, repeating his usual vague insinuations about ballots and his usual vague promise of an Obamacare replacement, Trump has arrived at his golf club.

“Biden said that the year's events had dismantled a myth deeply embedded in his consciousness. For years, he'd been telling a parable about the morning of Obama's Inauguration: 'I called my two sons and my daughter up, and I said, ”Guys, don't tell me things can't change.“' Hunching forward in his seat, he told me that Trump had made a mockery of that parable. 'I'm embarrassed to say, I thought you could defeat hate. You can't. It only hides. It crawls under the rocks, and, when given oxygen by any person in authority, it comes roaring back out. And what I realized is, the words of a President, even a lousy President, matter. They can take you to war, they can bring peace, they can make the market rise, they can make it fall. But they can also give hate oxygen.'”

--from Evan Osnos' piece, “Can Biden's Center Hold?,” in The New Yorker. Thanks to Adam for alerting me to it.

'Telling Lies in Front of Flags'

“The main theme of the convention seemed to be: telling lies in front of flags. Because it was four days of a full-throated denial of objective reality.” 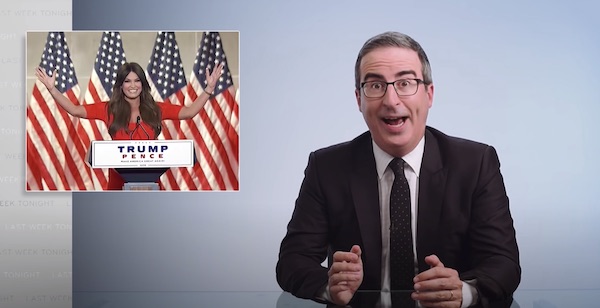 From the column “Trump's Favorite Four-Letter Word” by Brian Stelter in The New York Times.

Donald Trump has shouted “hoax” hundreds of times, about everything from climate change to Supreme Court rulings to impeachment. At this point, his copious claims about hoaxes add up to a hoax. And through the history of his use of this single word, we can see how he has fooled his biggest fans but failed to persuade almost everyone else.

During his 2016 campaign, Mr. Trump didn't rely on the word “hoax.” He didn't even say “fake news.” He called the news media “sick” and biased, but he didn't seriously start to deny its legitimacy until January 2017, when he was confronted by evidence that the Russian government aided his election. That's when he truly needed the news to be fake.

Looking back, Mr. Trump's exploitation of the term “fake news” to smear journalists was the single most consequential thing he did during the transition period. He built the scaffolding for his supporters to reject any and all information that wasn't Trump-approved. ...

The scaffolding line is killer. I assume the article is an excerpt from Stelter's book, “Hoax: Donald Trump, Fox News, and the Dangerous Distortion of Truth,” which I might have to read even though I'm sick of anything Trumpian. But the book also condemns Fox, which will be around, fucking things up, after Trump is gone. With no Fox, no Trump. It's all about Fox. We're the henhouse.

Read to the end of Stelter's column.

!!! Trump is told that QAnon believes he's saving the world from a secret satanic cult of cannibals and pedophiles. He says, “Well, I haven't heard that. But uh, is that supposed to be a bad thing? Or a good thing? If I can help save the world from problems...”

When 2 died of Ebola they said Obama should resign.

When 4 died in Benghazi they said Hillary should go to jail.

When 162,000 died from the Trump Virus, they said put him on Mount Rushmore.

“I spent decades working to elect Republicans, including Mr. Romney and four other presidential candidates, and I am here to bear reluctant witness that Mr. Trump didn't hijack the Republican Party. He is the logical conclusion of what the party became over the past 50 or so years, a natural product of the seeds of race-baiting, self-deception and anger that now dominate it. Hold Donald Trump up to a mirror and that bulging, scowling orange face is today's Republican Party.”

“You know who's at fault? Donald Trump. Because so many other nations have addressed [the Covid pandemic] properly. And this president, for the first six weeks, refused to acknowledge that this was even a serious thing. ... He has not done the things you need to do.”

— Al Franken on MSNBC today. My favorite part is this dig: “You don't see too many people brag about passing a dementia test.”