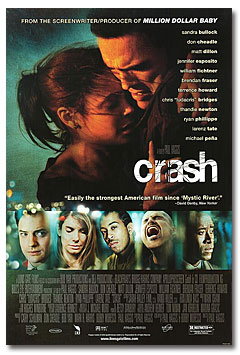 Talk about ruining a perfect evening.

Jon Stewart was funny, George Clooney was sharp, Salma Hayek looked to-freakin’-die-for, Philip Seymour Hoffman won in humble-but-lovable fashion and Ang Lee, the director of one of the best movies of the year, became the first non-Caucasian to win the Academy Award for best director.

But what is it saying?

That we all bear some form of racism. That we all “stereotype” other races. That, when pressured, racist sentiments spill out of us as easily as escaped air.

Here’s my take. Yes, we all bear some form of racism — that’s obvious. Yes, we all “stereotype” other races in some fashion — that’s obvious. (Particularly obvious in the Los Angeles of “Crash,” where so many characters are stereotypes.) But, no, we don’t easily give voice to our racist sentiments. And that’s why “Crash” rings so false.

Last month I wrote an article on the best picture nominees in which I talked about how the most potent form of racism in this country is no longer overt but covert. Once upon a time, yes yes yes, it was overt, which is another reason why “Crash” sucks. It’s doing what simple-minded generals do: It’s fighting the last war.

Here, let’s take a little quiz. Say you’re an Asian woman who has just rear-ended the car in front of you. What do you do? Do you…

How about this one? You’re talking to a bureaucrat on the phone about getting extra care for your father who is having trouble urinating, and she is not helpful. You ask for her name and she tells you: Shaniqua Johnson. You still need her help. What do you say?

One last one. You’ve just been told by your hot, hot girlfriend, with whom you’re lucky to be sleeping in the first place, that she is not Mexican as you presumed; that her mother is from Puerto Rico and her father is from El Salvador. What do you say?

And on and on and on. Every scene. Put a little pressure on somebody and they blurt simplistic racist sentiments. Right in the face of someone of that race.

Worse, none of it feels like sentiments these characters would actually say. It feels like sentiments writer/director Paul Haggis imposed upon them to make his grand, dull point about racism, when a more telling point about racism might have emerged if he’d just let them be. “Crash” is like a Creative Writing 101 demonstration of what not to do as a writer. To the Academy this meant two things: Best screenplay and best picture.

A few readers objected to my column last month — and will no doubt object to this one. They felt “Crash” taught them something important about race. More’s the pity. They said they learned that even good people do bad things, and even bad people have moments of compassion. Sorry they didn’t already know this. They felt like “Crash” was a movie the average person could support. “Average,” I guess, is the key word here.

Some agreed with me that the most potent form of racism today is covert rather than overt; but they added that this was a movie, after all, not a book, and in a movie you can’t show characters thinking.

Ah, but you can. Paul Haggis even did it in “Crash” — in the scene where Sandra Bullock's character grabs her husband's arm as two black men approach. Her move toward her husband is silent and instinctive, and Ludacris’ character suspects she does what she does because he’s black, and she’s scared of him, but he has no evidence. We only get the evidence later, from her, when she argues with her husband about the Latino locksmith. And even this scene is handled ineptly. She should have argued with her husband upstairs, away from the help. But Haggis wanted her to complain about the Latino locksmith within earshot of the Latino locksmith — because apparently that’s how we all do it. Lord knows if I don’t trust someone because of their race and/or class I raise my objection within earshot of them. Doesn’t everyone?

The main point is that you can dramatize our more covert forms of racism. But here’s how bad “Crash” is. Even though the Bullock/Ludacris scene is one of the more realistic scenes in the movie, it is still monumentally simplistic. I have a white female friend who lives close to the downtown area of her city. Usually she walks home from downtown. If she does this after dark, and two men are walking towards her, she’ll cross to the other side of the street to avoid them. But if the two men are black? She won’t do this, because she’s afraid of appearing racist. That’s how much of a conundrum race is in this country. “Crash” didn’t begin to scratch that surface.

So why did it win?

There are rumors that older Academy members shied away from even viewing “Brokeback Mountain” for the usual homophobic reasons. Lionsgate also pushed “Crash” on Academy voters; it handed out a record number of DVDs and advertised heavily. I don’t know which explanation bothers me more. All I know is I feel sick. It feels like the ’72 Olympic basketball finals, when the Russians cheated and won; it feels like the ’85 World Series when a blown call in game six tilted the balance towards the Royals. It feels like the good guys wuz robbed.

My friend Jim is more interested in the Academy than anyone I know who isn’t involved in the industry. (He’s a chauffeur in Seattle.) By early summer he’s already talking up possible nominees. The discussion reaches a fever pitch in November and December when the prestige pictures are rolled out and critics make their “best of” announcements. He goes to see these films. He talks about them. He actually cares.

“Crash’s” win did him in. The Academy, he said afterwards, “is not a serious body of voters who vote rationally. If they’re influenced by a DVD sales pitch, they’re not worth my time.”

Are they worth anyone’s time? Once again, they showed themselves susceptible to something other than a legitimate search for “the best.” Once again, marketing appears to have won. The Academy is 78 years old and acting every bit of it, and last night they took another doddering step towards irrelevancy.