The Hierarchy of Halloween Candy

Ask any kid: there is a definite hierarchy to Halloween candy and what is least desired is often the easiest to acquire. Parents seem to love the triumvirate of Three Musketeers, Milky Ways, and Snickers, but I always thought of them as the barter of Halloween candy: a means of attaining the rarer (and thus more coveted) 100,000 Dollar Bar or Kit Kat.

Even within this candy triumvirate, though, there is a definite order of preference. Snickers Bars are best because they contain the most items within the same small package (chocolate, caramel, nougat, and peanuts). Milky Ways are simply Snickers without the peanuts (a point against them), while Three Musketeers Bars take away even the caramel and leave only the nougat, a dreadful item, which always seemed to me the candy equivalent of mystery meat. Even at the age of eight I understood chocolate and caramel. But nougat? Where did it come from? What was it made of?

Consequently, when forced to retire from trick-or-treating at the age of twelve, I was determined to give out the better, rarer treats. During shopping, my father picked out — you guessed it — Three Musketeers Bars. But I soon found out why 100,000 Bars were rarer finds; they were more expensive. My father refused to buy them.

This particular Halloween was typical. The weather was cold and drizzly, with the smell of burnt pumpkins in the air. My father had gone to a party, leaving my brother and I to hand out candy. Everything went fine until eight o'clock when we realized our supply of treats was dwindling. We viewed it with all of the panic of a besieged fortress running out of ammunition.

I accused my brother of snarfing Snickers behind my back. He accused me of the same. We both condemned our father for being too cheap to buy at least one more package. I was about to suggest that we turn out the lights and hide behind the couch when my brother came up with an alternate plan.

My father, you see, had recently appeared on the TV game show The 25,000 Dollar Pyramid. His partner had been Debralee Scott, an actress who went from her role on Mary Hartman, Mary Hartman straight into oblivion, and she and my father were — how shall I say this? — not exactly compatible. Trying to describe Adolf Hitler, my father came up with the historically accurate but emotionally stagnant clue, “He was Chancellor of Germany during the 1930s!” Of course Debra Lee Scott didn’t help matters. Even after my father gave the clue, “He does the evening news on CBS,” and then offered a passable imitation of an avuncular anchorman, “And that's the way it is...” Debra Lee Scott, rather than crying out “Walter Cronkite!,” simply shook her flustered hands and told him to go on to the next one. “I'm so bad at names,” she said.

As a result no game show money flowed into our house. We did, however, receive a mess of consolation prizes: La Choy Chow Mein, Cepacol throat lozenges, Kaopectate. It was these items my brother suggested we give away when the candy ran out.

“But the kids,” I said. “They're expecting candy.”

My brother — all of fifteen years old — played the parent. “This is better for them,” he said. “It's healthy.” The next time the doorbell rang, he was ready. Two children were on the front stoop: a little boy dressed as a vampire and a little girl dressed as a ballerina.

“Trick or treat!” they shouted.

Whumpf! Whumpf! A can of chow mein was rifled into each sack.

“Thank you!” they shouted, and continued obliviously onto the next house. What must it have been like when they divvied up their booty later that evening? “I got thirteen Three Musketeers, ten Milky Ways, eight packs of sweet-tarts, seven Snickers, four Slo-Pokes, three Milk Duds and...a can of Chow Mein?”

Kids expecting Baby Ruths were treated to Cepacol throat lozenges. Mothers around the neighborhood must have been perplexed. “Who gave you this bottle of Kaopectate?” In a few minutes, our reputation for being a good trick-or-treating house was shattered. “Don't go there,” I imagined some sullen kid saying. “They only give out diarrhea medication.”

Amazingly enough, no one complained. Perhaps parents appreciated the Chow Mein and throat lozenges. But a better explanation may reside in this simple fact: None of the stuff we gave out contained nougat. For this, everyone was grateful.

—originally published in The Minneapolis Star-Tribune and The Seattle Times 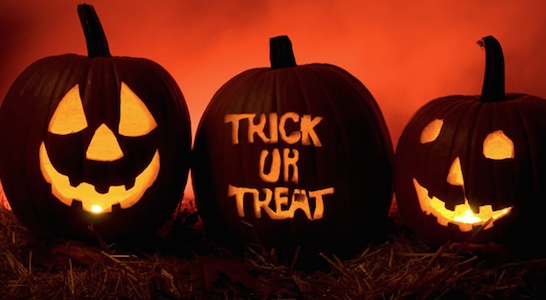