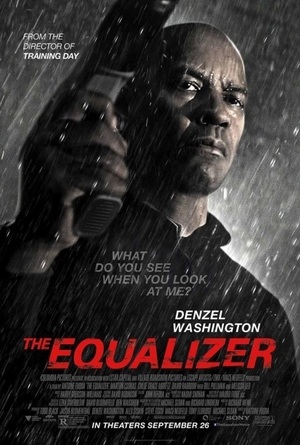 Watching “The Equalizer,” in which Robert McCall (Denzel Washington) helps stock characters (child prostitute, Latina restaurateur and son) with their various problems (beating back the pimps and gangsters and corrupt cops of the world), I began to think of this old Bob Dylan lyric:

And I began to wonder if this wasn’t how our nation went wrong; how we changed from isolationists to what we are today: wannabe nation builders and whoopsiedaisy nation destroyers. Maybe it was good ol’ liberal Hollywood that set us on this path. Maybe the George W.’s of the world think that nation-building is as easy as riding into town, beating back the bad guys, and riding out again. Done and done. Maybe we all long to hear the phrase, “Who was that masked man?”

Something similar is said in “The Equalizer,” the modern, stylized adaptation of the 1980s TV series, but it’s generally said by the bad guys as they’re lying on the ground with fountains of blood leaking from their necks. Shock in their eyes, they manage to gurgle, “Who are you?”

Do we ever find out? Not really. Our heroes don’t need masks anymore to be masked men.

Hemingway and Cervantes
The beginning of the movie isn’t awful. Writer Richard Wenk (“The Mechanic”; “The Expendables 2”) and director Antoine Fuqua (“Olympus Has Fallen”; “Training Day”) build the tension slowly. McCall is a man who dresses proper and helps everyone out at work, which is in a kind of fairy-tale Home Depotish warehouse where no manager is an asshole and the main source of entertainment is guessing what Robert did before this gig. (Cf. “Saving Private Ryan.”) At one point he gives a joke answer. “A pimp?” they say, laughing. “A Pip,” he corrects. Then he does the backing moves for Gladys Knight. Later, before the final battle, we get to hear a bit of “Midnight Train to Georgia” blaring over the loudspeaker. That’s a nice touch. It was nice to hear that.

But despite the smile and the charm, Robert is a haunted man who can’t sleep. So at 2 a.m. he takes his latest book—he’s reading the “100 books everyone should read before they die”—over to the local 24/7 diner, which is a shockingly clean, quiet place despite the fact that it’s open 24/7 and is a hangout for prostitutes. “Go make your living,” the counter-guy/owner tells the child prostitute solicitously when the limo with the fat man pulls up outside. Way of the world, right?

Her name is Teri (Chloë Grace Moretz), and she and Robert develop a kind of rapport. She’s always interested in what he’s reading, and what he’s reading usually reflects on what’s about to happen. “The Old Man and the Sea”? The fish allowed the old man to test himself, to see if he could do what he’d always done. “Don Quixote”? It’s about a man who thinks he’s a knight in shining armor during a time when there are no more knights in shining armor. Etc.

This stuff ain’t bad, and Denzel’s usually fun to watch. He’s sort of the action-hero Bill Cosby here, forever giving advice to the younger, sloppier generation: pull up your pants, quit eating potato chips and processed sugars. “Doubt kills,” he tells Ralphie (Johnny Skourtis), the fat Hispanic dude who wants to be security guard. “You gotta be who you are in this world, no matter what,” he tells Teri.

Teri’s the reason for the slow build-up. Shit keeps happening to her at the local diner at 2 a.m. Another call from her pimp. (Cut to Denzel, brooding.) That car pulls up outside with the fat man in it. (Cut to Denzel, brooding.) The next night she has a bruise on her face, and Robert is walking her home when the bad guys, led by Slavi (David Meunier), a Russian pimp, cut them off and take her away. They give Robert their card: RUSSIAN DOLLS. Not that he needed it to find them. He finds everybody.

After that, she doesn’t show up. She’s in the hospital, beaten to within an inch of her life. Cut to Denzel, brooding no more.

How many white girls has Denzel saved over the last 15 years? When did this become his cinematic lot in life?

Anyway, that’s what starts it. He’s ex-CIA, or some such, and his skills are immense, and he cuts a swath through Slavi and his boys in that “Sherlock Holmes” style: seeing everything relevant in both quick and superslow-mo, then acting. Boom-boom-boom. Dead dead dead. He always offers them an out but they never take it. He does the same with some corrupt cops who are leaning on Ralphie’s mom. He solves everybody’s troubles ’cept mine.

Does this help him sleep? That would be a nice touch. That once he begins to kill again, and be who he is in this world, he can sleep; that it wasn’t past killings that kept him up but lack of killings. Like he’s a vampire who needs blood. But that would make “The Equalizer” a more complex movie than it is. Instead, it’s a sugar rush, a handful of potato chips. It’s a Big Mac. Before you eat it, you think, “Yeah, that sounds good”; afterwards you realize you really should’ve eaten something else. But we keep stuffing our faces with these things. If only Robert had warned us.

The movie quickly becomes ridiculous. Turns out Slavi wasn’t just a cackling, tattooed pimp; he was the Northeastern arm of a Russian oligarch/gangster named Pushkin (Vladimir Kulich), who acts with impunity since he’s got corrupt Boston cops on his side (David Harbour, the poor man’s Peter Krause). So Pushkin sends his man, Teddy (Marton Csokas, the poor man’s Kevin Spacey), to assess and clean up.

Robert gets shot a bit here and there, but nothing that some home-remedy boiled honey or battlefield cauterizing won’t cure. Mostly, grim-faced, he mows guys down, leading to the inevitable showdown at the Home Depotish warehouse. My hope during? That Teddy, the main bad guy, rather than his various henchmen, would get it first. Wouldn’t that be fun? Just for a change? But “The Equalizer” plays it all without imagination. The further we go, the more stylized the violence becomes, until our eyes are as dead as Denzel’s.