How many ways was he a giant? In stature (6' 4“ at a time when most ballplayers didn't reach 6 feet); in San Francisco (of course); and ultimately of baseball. There was a musicality to his name. It rhymed. It's now the name of a cove on the other side of the right-field stands at Giants Stadium. SABR, in its tribute, calls this fitting since ”his ferocious swings always sent ripples of fear throughout the National League.“ 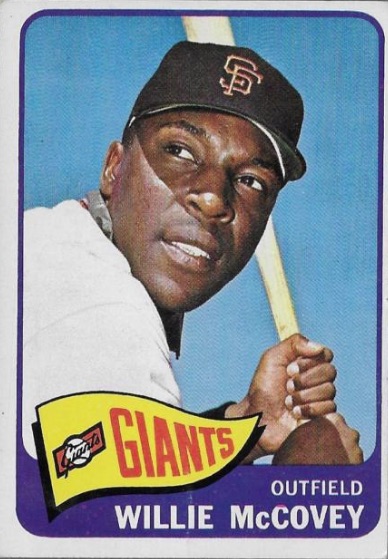 When my guy, Harmon Killebrew, won the Most Valuable Player award in 1969, just as I was becoming baseball cognizant, McCovey was the first baseman in the other league who did the same. There's actually an interesting parallel between the two. Killebrew was a ”bonus baby,“ a player signed north of $4k who had to remain on the 25-man roster for two years, but his first full year in the Majors, 1959, was McCovey's first year overall. He debuted July 30 and went 4-4 with two triples and three runs scored. He hit his first homer, off Pittsburgh's Ron Kline, three days later. He only played in a third of the games that year, 52, but still won the NL Rookie of the Year. Unanimously. Meanwhile, in the AL, Killebrew led the league in home runs.

Then it was McCovey's turn, believe it or not, to fight for playing time. According to Joe Posnanski in his tribute, the Giants were loaded then and didn't have an obvious spot for McCovey. Or his obvious spot, first base, was taken by Orlando Cepda (another musical name), who was NL Rookie of the Year in 1958, and who led the league in homers and RBIs in 1962. Nice problem to have, Giants. McCovey didn't play a full year until 1963 when he was often in left field. He didn't play a full year at first base until 1965.

But McCovey and Harmon? Some kind of synchronicity there. They were mirror images. NL/AL. Black/white. ”Stretch“/”The Fat Kid.“ Both were quiet. Both had the most powerful swings in their league. They were homers/RBIs/walks guys who hit the thing a country mile. For their MVP years, their lines are somewhat similar:

Killebrew hit more homeruns in the 1960s than anyone (393), while McCovey was fifth (300), but that was in part because of limited playing time, a tougher league, and a tougher ballpark to hit it out of. Was this why McCovey seem more respected? He was a first-ballot Hall of Famer while the Hall passed on Killebrew three times before deciding ”What the hell.“

I wish I'd gotten to see McCovey play more. We saw AL teams in Bloomington. But I was certainly aware of him: Topps, NL Leaders, Baseball Digest, and ”Baseball Stars of 196-whatever.“ Not to mention Peanuts. 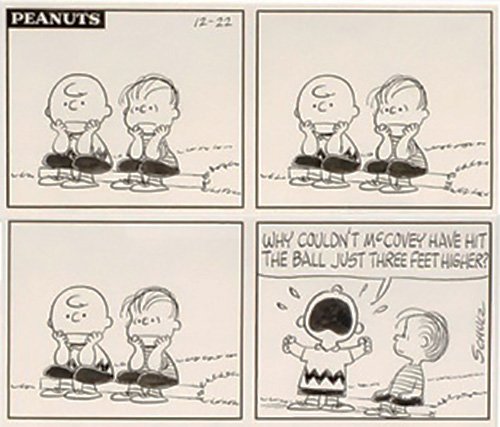 I'd always assumed this was a random game, and the three feet was what was necessary to hit the ball over the wall. I think I was an adult before I realized, no: Schulz, a Minnesota boy now living in northern California and rooting on the Giants, was lamenting the end of the 1962 World Series. The Giants were playing the hated Yankees and losing Game 7 1-0 in the bottom of the 9th when Matty Alou led off with a pinch-hit bunt single. Ralph Terry struck out the next two batters, but then Willie Mays hit a double to right. Some part of me wonders, without seeing the footage, how Alou didn't score on that. Two outs, double to right, speedy baserunner? But he didn‘t. Some part of me also wonders why Terry stayed in, but that was baseball then. He stayed and faced McCovey, who hit a screaming line drive ... right at second baseman Bobby Richardson. Game, series, season over. Cue Charlie Brown’s lament. Was it McCovey's most famous at-bat? Probably. Cue Shelley: Our sweetest songs are those that tell of saddest thought.

Walter Alston: ”When he belts a home run, he does it with such authority it seems like an act of God.”

Sparky Anderson: “If you pitch to him, he’ll ruin baseball.”