I think I started out looking at who led the Twins in bWAR various years, then wondering how often was it Harmon Killebrew (twice: 1961 and '67), or Tony Oliva (three times) or Rod Carew (four). Who's done it the most? Believe it or not, Chuck Knoblauch, five straight years from 1993 to 1997. Then my focus narrowed to the team I grew up on, the 1970s Minnesota Twins. And eventually it led to this question:

I'll start out by saying the 1970s was not a great homerun decade for Minnesota. We had three seasons in which the team leader didn't even hit 20:

Anyway, here are some of the biggest homerun hitters for the Twins in the 1970s:

None of them, though, are the answer. The answer is ... Harmon Killebrew, who hit 113 homeruns in his five 1970s seasons with the Twins—before Calvin let him go and Killer played his final sad season in light blue for the Kansas City Royals. Those homers obviously aren't included here. Neither is his final homerun, #573, September 18, 1975. What's special about that one? He hit it at Met Stadium off the Twins' Eddie Bane in the second inning, and it proved the difference in a 4-3 Royals win. And that was that. He appeared in four more games for KC, went 1-10 with two walks, and retired. 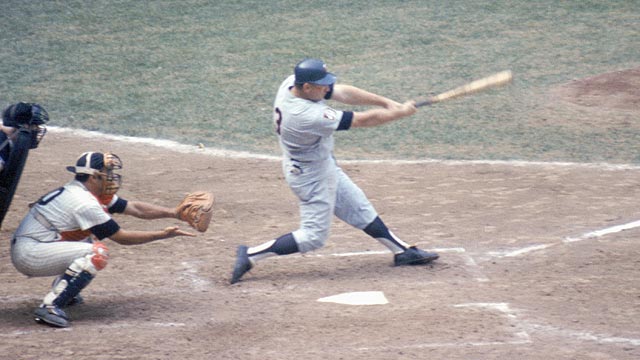