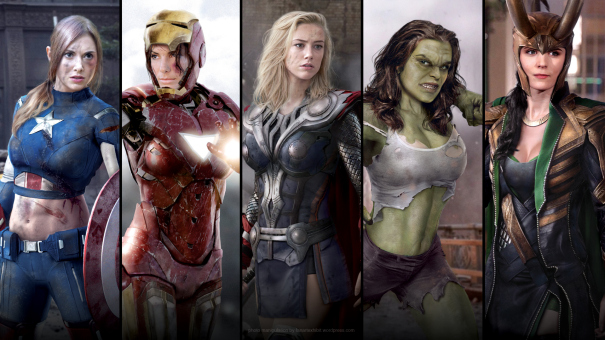 The female Avengers via FanArtExhibit. Missing: Black Widow as a man.

This article by Alyssa Rosenberg, “Legendary Comics Creators Dismiss Sexism Critiques,” in which she confronted comic book creators Michael Kantor, Todd McFarlane, Len Wein and Gerry Conway about sexism in the industry, made the rounds among geeks last week.

Here's McFarlane's response to the charge of sexism within comic books:

As much as we stereotype the women, we do it with the guys. The guys are all good looking, not too many ugly superheroes. They’ve all got their hair gelled back. They have got perfect pecs on them. They have no hair on their chest. I mean, they are Ryan Gosling on steroids. Right? They are all beautiful. So we actually stereotype and do it to both sexes. We just happen to show a little more skin when we get to the ladies.

It’s an ancient canard that male heroes are as idealized as women, an idea that ignores their costumes, the difference between a fantasy of power you want to inhabit and sexual ability you want to take advantage of, and the contrast between admiring what someone can do with their body, and what you can do to theirs.

It's a smart-enough response if a bit dismissive of the effect comic books and superheroes have on boys. Plus it's neither a canard nor ancient.

It also ignores the way power tends to be conveyed in our culture. For men, it's still about what you do; for women it's still about how you look. This has been changing during my lifetime, and unfortunately toward greater shallowness for both genders. The 1970s feminist critique of the objectification of women hasn't led to women being less objectified, but it has created more objectification of men in terms of their looks. (The idea that men were never objectified is incorrect. They were objectified by what they did, and how much they earned. That hasn't gone away.)

What's the endgame in the argument? That's what I'm curious about. Is Rosenberg suggesting that better female superheroes will create greater female readership? Or will empower that female readership? As it's done all these years with boys? Except, right, it hasn't empowered shit, has it? There's no correlation between reading fantasies of superhuman powers and being empowered in the real world. Judging from a typical comic convention, you might say it's the opposite. You might even say girls are better off without this particular superpowered fantasy to contend with.

You want empowerment? Here. Figuring out what's missing in a particular medium is, yes, a sign that there's something wrong with that medium. But if the medium is thriving, and has the attention of the marketplace, it's also a glorious opportunity.

Further reading on the subject: a review of the documentary “Women Women! The Untold Story of American Heroines.”