When Billy and Reggie Met

When the A's came to Minnesota for the first time [in 1969], Billy was irked when Oakland's twenty-three-year-old slugger Reggie Jackson slammed two home runs as the A's built a 7–0 lead. When Reggie came to the plate late in the game, two pitches whizzed by his head. Jackson charged the Twins pitcher, Dick Woodson. The benches cleared.

“That's the kind of manager Billy Martin is,” Reggie said after the game. “If someone is beating his club, he's going to put a little fear in that team's heart. I don't blame Woodson. He was following orders. I blame the manager.”

Billy denied he was throwing at Jackson and said that as the two teams were being separated on the field, Jackson threatened him. “He yelled at me that he was going to get me,” said Billy, not looking overly worried. “I want somebody to write that so that if we ever get in a fight, he won't be able to sue me and say I started it.” 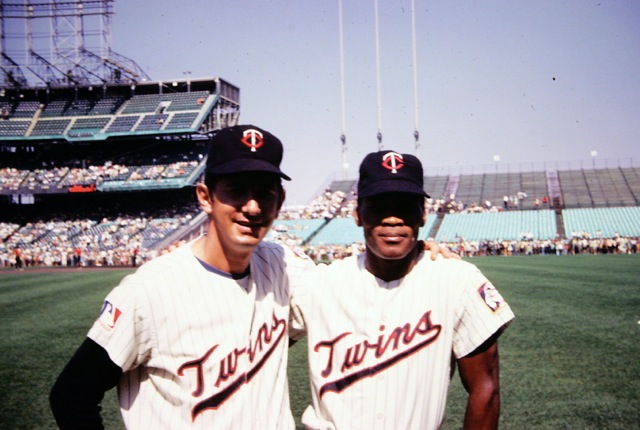 Billy Martin with leadoff hitter Cesar Tovar on Camera Day in 1969. Despite improving the team by 18 games and taking them to the first ALCS, he would be dismissed at the end of the season for 1) getting into bar brawls, and 2) pissing off the owner. Twins fans were pissed off by the dismissal for years.