What's Up with the IMDb Rating of the WikiLeaks Documentary 'We Steal Secrets'?

I never rate movies on Netflix or IMDb or anywhere else. I think it's pointless—it's just a number—but more importantly I don't want to give away that shit for free. Instead I write about it in detail and give it away for free here. Which has the advantage of being here.

But last week on IMDb I rated Alex Gibney’s latest documentary, “We Steal Secrets: The Story of WikiLeaks.” Why? This is why. It’s a screenshot of the doc’s IMDb page from last week. What’s wrong with this picture? 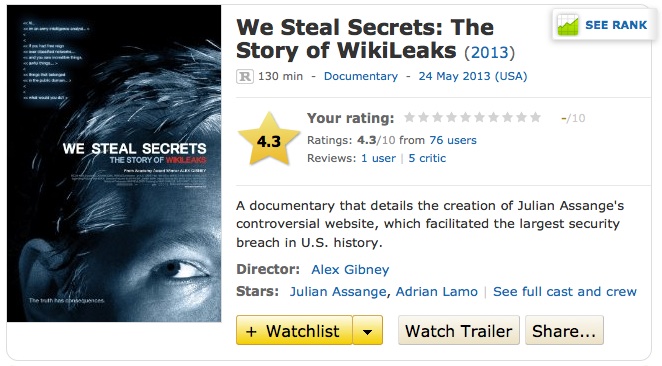 Is “We Steal Secrets” that bad? Not nearly. In my movie-reviewing days at The Seattle Times, I would’ve given it four out of four stars. I keep recommending to people. I recommend it to you now. Here's my review.

So why the low rating? I assume WikiLeaks' supporters are voting early and often against the doc without having seen it. The doc has the temerity to take a nuanced approach to Julian Assange. It suggests that what began with a demand for openness has become a closed society. It tells a tragic tale. The IMDb rating may be part of that tragic tale. What better way to suppress information than to imply it's no good?

A few days ago, out of the blue, I received this odd tweet:

I checked out the links above but couldn't get past the defensiveness. One of the first complaints: “The premiere of 'We Steal Secrets' is opportunistically timed” — I.e., near the Bradley Manning trial. Right. Because distribution companies usually try to open their films unopportunistically. They never take advantage of, say, the holidays or summer vacation.

This line is worse: “The film portrays Manning’s alleged acts as failure of character rather than a triumph of conscience.” Not my read at all. If the doc has sympathy for any of its three main players—Manning, Assange, and Adrian Lamo—it's for Manning. From my review last week:

But it wasn’t until Pvt. Bradley Manning, a nice, fucked-up kid from Oklahoma, who was stationed in Iraq and wondered what to do about the confidential—and to him, immoral—information he had access to, that we all knew Assange’s name.

If WikiLeaks has serious complaints about Alex Gibney's doc, then it needs to focus on them. But focus has never been WikiLeaks' strong suit. They've always been about TMI.

This was the IMDb page of “We Steal Secrets” this morning: 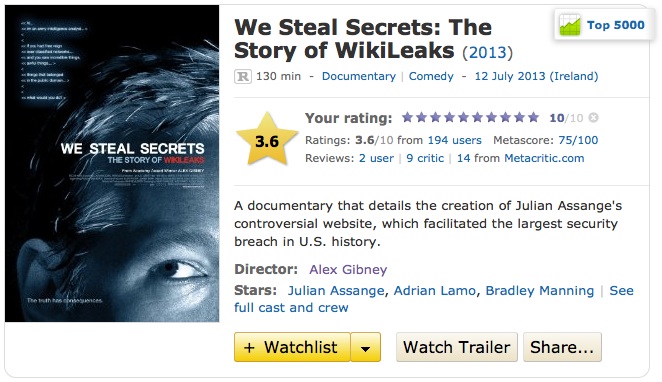