I see the photographs of young people with blood-stained legs, hunched over, and running toward hoped-for safety, and they remind me of photos of recent terror attacks that we've seen in Europe—at the Ariana Grande concert in Manchester, England earlier this year, or during the November 2015 Paris attacks. The culprits there were Muslim extremists. Our terrorism is internal.

This time it was Las Vegas, a country music concert on the strip, where, from the 32nd floor of the Mandalay Bay hotel and casino, another white American man, Stephen Paddock, 64, a retiree who supposedly loved country music and gambling, holed up with 42 rifles and then began raining down terror, killing 59 (as of this writing) and wounding hundreds, before taking his own life. In the days to come we'll sort out why. If there is a why. I doubt it.

Immediately, from the GOP, we got the usual. “Wrong time to talk about gun control.” “We shouldn't politicize the issue.”

Of course, not talking about it is politicizing it, too, probably more so. It's a political calculation. Talking about it now puts the GOP and NRA at a political disadvantage, which they don't want, so they stifle the debate with these comments. And the Dems let them.

But there's something wrong and it needs fixing. You know who didn't want to talk airline safety after 9/11? Terrorists.

I came across this today. It's by Brian Bilston. I like the lack of rhyme, the thud, the dullness, of each fourth line. 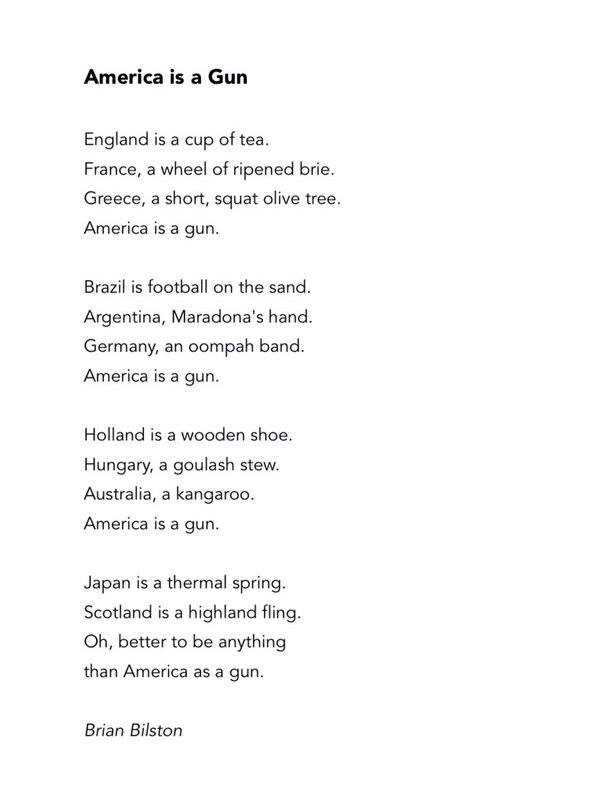