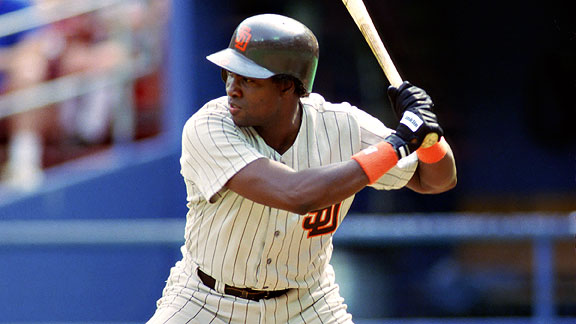 About to put the ball in play.

Tony Gwynn is tied for 18th on the career batting average list with a .338 mark. The main thing you need to know about that is that almost every one of the 17 guys in front of him played in the 19th century. The closest contemporary to Gwynn among the 17 is Ted Williams (.344), who played from 1939 to 1960. Gwynn was born in 1960. Nobody who played later than the year he was born had a higher career batting average than Tony Gwynn.

Tony Gwynn is 112th on the career on-base percentage list with a .388 mark. The main thing you need to know about that is though he was not a bases-on-balls man, he still walked nearly twice as often as he struck out. These days you’d be hard-pressed to find someone who simply walked more than they struck out, but Gwynn’s career walk-strikeout numbers are superb: 790 to 434. That’s actually comparable to Joe DiMaggio’s career walk-strikeout numbers: 790 to 369. Keep in mind: DiMaggio barely struck out in an age when few people did. Tony Gwynn barely struck out in an age when strikeout records were falling left and right. But he was a man who put the ball in play.

Tony Gwynn is 187th on the career OPS list with a .847 mark. The main thing you need to know about that is the guys who are behind him: Reggie Jackson (.845), Carl Yastrzemski (.841) and Roberto Clemente (.834). Gwynn’s secondary numbers might not have been superlative, in other words, but his primary numbers were so good they lifted everything else up.

He led the league in hits seven times and in hitting eight times. Only Ty Cobb led the league more often in hitting. But the main thing I can offer, that you can’t find on baseballreference.com or ESPN.com, is an incident with my friend Adam at the inaugural game at Safeco Field in July 1999.

The Seattle Mariners moved to Safeco mid-season, and chose for an opponent, or had chosen for them, their offical rivals, the San Diego Padres—truly the dullest, most manufactured rivalry in all professional sports. My friend Adam, a magazine editor, was on the field during batting practice. At one point, a batting-practice ball rolled up to him. Instant souvenir! Or was it? Should he, a member of the press, take it or leave it alone? But this was a once-in-a-lifetime chance. So he took it.

Did Adam look up? Did he know the dude was talking to him? Did he assume it was for someone else?

Hey you! Put that ball back!

And Adam looked over to see Tony Gwynn advancing toward him. He was shouting loudly. He was letting everyone know the awful thing Adam, now blushing crimson, had done. It’s pretty funny when you think about it. Balls getting hit left and right. Getting hit into the stands. Getting tossed into the stands by players. And here’s this future Hall of Famer, advancing on poor Adam because of one lousy ball.

Then Tony Gwynn broke into a grin to let him know he was giving him shit. Adam still has that ball.