Tony Curtis, born Bernard Schwartz of the Bronx, died last night of a cardiac arrest at the age of 85. There's an excellent obituary from Dave Kehr of The New York Times here.

A few years ago, to coincide with the release of the Kevin Costner film “Mr. Brooks” (remember that one?), I wrote a piece for MSNBC.com called “When Leading Men Go Bad,” and counted down the top 8 villainous turns of Hollywood heroes. Tony Curtis's Boston Strangler came in at no. 5.

5. Tony Curtis in “The Boston Strangler” 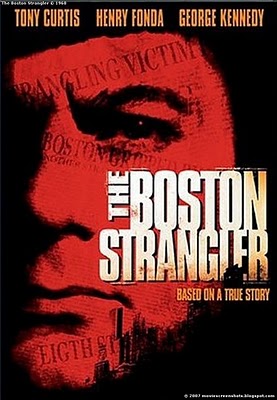 For an actor with a lousy rep —nominated by Michael Medved as the worst actor of all time in “The Golden Turkey Awards” — Tony Curtis has given us some great performances. He played a racist con chained to Sidney Poitier in “The Defiant Ones,” a servile PR flak chained to Burt Lancaster’s gossip columnist in “Sweet Smell of Success” and a Roman slave chained to Laurence Olivier in “Spartacus.” Not to mention his comic turn as Joe/Josephine/Cary Grant in “Some Like It Hot.”

But for most of the 1960s he played glib roles in frothy sex comedies like “Sex and the Single Girl” and “The Great Race.”

The first shock in “The Boston Strangler” is that Curtis, as Albert DeSalvo, isn’t there for the first hour of the film. We see only his boots and gloved hands, and the results of his crimes. When he does show up, well, he ain’t pretty no more. He’s broken-nosed and fleshier of face. We see him commit one crime, then two. In a way this is more than he sees.

Once he’s apprehended (on a breaking-and-entering charge), we find out he’s a split personality — he doesn’t know what he does — so Henry Fonda, as head of the commission tracking him, tries to break through to the other side. Curtis scrunches in his chair like a chastened schoolboy. He twitches. He has flashes of memory in which Fonda, his interrogator, appears. The film was made at a time when Hollywood was still trying to cinematically recreate inner as well as outer journeys, and “Strangler” exhibits this best when DeSalvo feels his wife has betrayed him: He sees her, suddenly, as if from a long distance away. Later, confused and blinking, he says the idea of strangling her popped into his head, but “How did she know?” He doesn’t yet realize he did try to strangle her. He doesn’t yet realize his “ideas” are the Strangler’s actions.

In his book “Bambi vs. Godzilla,” David Mamet calls Curtis’ performance here, “Some of the greatest moments of film acting.”

Which leads to the inevitable question: Is Michael Medved right about anything?