I saw the trailer for “Tinker Tailor Soldier Spy” the other night before seeing Ryan Gosling in “Drive” (more later). Now I knew “TTSS” had been getting good notices—strong best picture candidate, etc.—and I knew it had some heavy hitters in it, Gary Oldman and Colin Firth and the like; but I was shocked, shocked, pleasantly shocked by just how much talent is in this thing. One good actor after another showed up in the trailer. “Hey, John Hurt ... Wow, that looks like Tom Hardy. Really? And Ciarian Hinds is in this, too?” Add Toby Jones and Mark Strong. Plus directed by Tomas Alfredson, who directed “Let the Right One In.”

Jeff Wells over at Hollywood Elsewhere is particularly impressed with Oldman:

I don't want to get into this too deeply because the film doesn't open for another nine or ten weeks but I can at least say that Gary Oldman's performance as George Smiley has to be considered...no, trumpeted as Best Actor-worthy. I've read a couple of reviews that claim he's not aping Alec Guinness's performance as Smiley in the 1979 British miniseries version. Well, he does seem to be doing that. To me, at least. Oldman barely moves in this thing, but oh, how he delivers! The man is an absolute pleasure just to watch...to simply regard. The stillness of him is sublime.

Opens December 9 in the U.S. 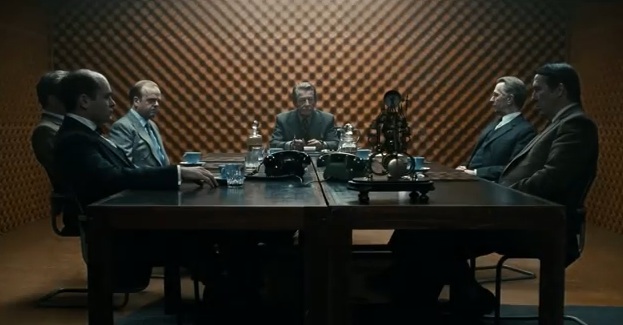