They Keep Making Sequels to Movies I Pan

I know: the critic's lament.

Don't remember the original, “Red”? I do. I remember going to it on a dark day in October 2010 and leaving the theater in a darker mood. Here's part of my review:

How far have we fallen as a country in the last 30 years?

Our movies about the CIA used to be like this: The CIA is trying to assassinate the president of the United States! Oh my god!

Now they’re this: The CIA is trying to assassinate the vice-president of the United States! Yay!

Our fear used to be Frankensteinian in nature. The monster we created, the national security agency, had turned on its creator, the U.S. government, and through a rogue agent (“In the Line of Fire”), or with the help of the entire agency (“JFK”), was trying to remove the democratically elected president of the United States. The CIA, created to protect the people, but unaccountable to the people, was subverting democracy.

Now? In “Red”? The agency still sucks because it’s a bureaucracy and bureaucracies suck. But democracy sucks, too. The vice-president needs to be assassinated not only because he’s immoral but because he’s running for president—he has the money and the organization—and we have no faith that we the people won’t see through the money and organization, and we’ll elect him anyway. We are, in a certain sense, the movie’s unnamed villains. Democracy, a good idea in its day, doesn’t work with people as stupid as us.

“Red” grossed an unexpected $98 million domestic, $108 international. It's got a 7.0 on IMDb and a 72% favorability rating from audiences on Rotten Tomatoes. So here we are again. The sequel looks even worse.

Further reading on the history of the CIA in cinema.

“Red 2” is hardly the beginning and hardly the end. The next few weeks will bring us sequels to “Wolverine” and “Kick Ass,” neither of which I liked. Well, barely anyone liked “Wolverine.” Even though everyone likes Wolverine. 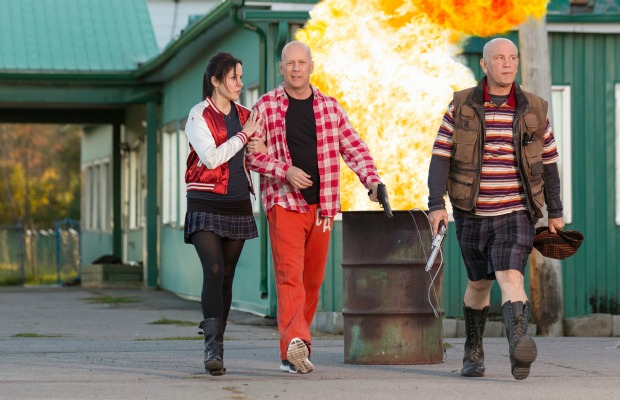