One of the two dozen books I bought at Powell's Books this summer was written by Barry Levenson, a former assistant attorney general of Wisconsin, and called “The Seventh Game: The 35 World Series that Have Gone the Distance.” It was published almost a decade ago, in 2004, but it was still up-to-date because there had been no Game 7 since 2002.

Crazy, beautiful game tonight. Full of errors and bad managerial moves (why take out Feliz in the 10th?) but incredible comebacks. Twice. Or thrice. How many lead changes or ties? I count 10. Back and forth, back and forth. I'm beginning to believe in these Cardinals. From, what, 10 1/2 back, down against the Phillies, down against the Brewers, down against the Rangers. Down by two with two strikes in the bottom of the 9th. Down by one with two strikes in the bottom of the 10th. But as soon as Ron Washington pinch-hit for Scott Feldman, I knew it was over. That seemed like the wrongest of moves in a night of wrong moves for both managers. When it went to the bottom of the 11th, with former Mariner Mark Lowe on the mound for Texas, I said aloud, to Jim and Tim and Patricia, “It's over. Cards will win it here.” A few pitches later ... boom.

This presents a dilemma for me. Wednesday morning I bought tickets to Susan Orlean presents RIN TIN TIN: THE LIFE AND THE LEGEND at the newly updated SIFF Uptown Theater on Friday night. I'd just finished Orlean's book on Rin Tin Tin so it seemed a natural. For a moment, though, I paused before buying the tickets. “What if,” I thought, “one of the World Series games is postponed and the Cardinals win Game 6? Then Friday night will be Game 7!” But I dismissed the thought. It seemed so unlikely that both things would happen.

How about that trivia question FOX asked during the game? “How many Game 6s have ended with a homer?” Jim and Tim and I got it in about 30 seconds: Fisk, Puckett, Carter. “Odd that they asked it, though,” I thought, then aloud: “Wouldn't it be weird if...?” 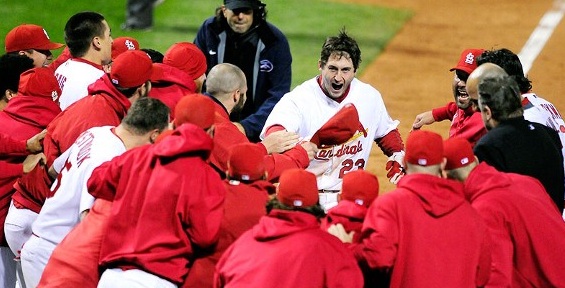 David Freese homers in the bottom of the 11th inning to send the World Series to a 7th game for the first time since 2002.