The Sayings of Chairman Roger (NSFW)

That's former Fox president Roger Ailes, of course, as reported by Gabriel Sherman in his New York magazine cover article, “The Revenge of Roger's Angels: How Fox News women took down the most powerful, and predatory, man in media.” The first half of the piece, as Roger goes down, as he twists in the wind, as he tries to TURN THOSE MACHINES BACK ON, is delicious. The second half, detailing his long career of sexually harassing women, gets pretty damned icky. Be forewarned.

Among the quotes attributed to him:

“You look like the women in [Maxim]. You have great legs. If you sleep with me, you could be a model or a newscaster.”

“For a man in my position, [drinks] would have to be alone at a hotel. Do you know how to play the game?”

“I am going to put [this compromising videotape] in a safe-deposit box just so we understand each other.”

His reward? A $40 million parachute, and a temporary non-compete clause that didn't include presidential campaigns. So now Ailes is on Trump's team, making American grate again.

Read Sherman's whole article. Please. Then pass along to the Fox News watcher in your family. 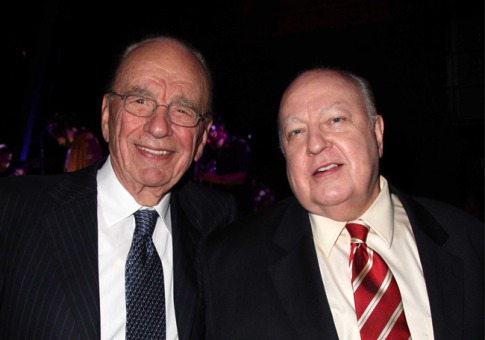 “The feeling I got in the interview was repulsion, power-hungriness, contempt, violence, and the need to subjugate and humiliate,” says a woman who auditioned for Ailes.